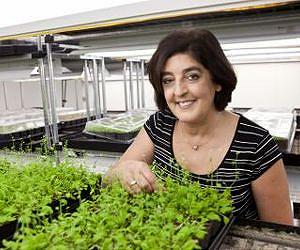 Modifying natural shade avoidance is important.  Our crops almost always have ample time to productively mature and thus not reacting to shade becomes useful in producing a shorter stalk and larger fruit.

Corn does not need to be ten feet high in order to capture the light it needs to produce two full ears of corn by September.  The same is true for most plants and on top of it, a longer maturing time allows a greater concentration of nutrients.

It is not an obvious problem but it is certainly an issue with domesticated plants that could be beneficially managed.  Wild plants are in not just an arms race for sunlight but also to get maturity before it is out-competed by others.  This is controlled in agriculture.

This is Joanne Chory, Professor and Director, Plant Molecular and Cellular Biology Laboratory. Credit: Courtesy of the Salk Institute for Biological Studies.

Mild mannered though they seem, plants are extremely competitive, especially when it comes to getting their fair share of sunlight. Whether a forest or a farm, where plants grow a battle wages for the sun's rays.

A plant's primary weapon in this fight is the ability to grow towards the light, getting just the amount it needs and shadowing its competition. Now, scientists at the Salk Institute for Biological Studies have determined precisely how leaves tell stems to grow when a plant is caught in a shady place.

In a paper published April 15 in Genes and Development, the researchers report that a protein known as phytochrome interacting factor 7 (PIF7) serves as the key messenger between a plant's cellular light sensors and the production of auxins, hormones that stimulate stem growth.

"We knew how leaves sensed light and that auxins drove growth, but we didn't understand the pathway that connected these two fundamental systems," says Joanne Chory, professor and director of the Salk's Plant Biology Laboratory and a Howard Hughes Medical Institute investigator.

"Now that we know PIF7 is the relay, we have a new tool to develop crops that optimize field space and thus produce more food or feedstock for biofuels and biorenewable chemicals."

Plants gather intelligence about their light situation - including whether they are surrounded by other light-thieving plants - through photosensitive molecules in their leaves. These sensors determine whether a plant is in full sunlight or in the shade of other plants, based on the wavelength of red light striking the leaves.

If a sun-loving plant, such as thale cress (Arabidopsis thaliana), the species Chory studies, finds itself in a shady place, the sensors will tell cells in the stem to elongate, causing the plant to grow upwards towards sunlight.

When a plant remains in the shade for a prolonged period, however, it may flower early and produce fewer seeds in a last ditch effort to help its offspring spread to sunnier real estate. In agriculture, this response, known as shade avoidance syndrome, results in loss of crop yield due to closely planted rows of plants that block each other's light.

Scientists knew that a pigment found in leaves of thale cress plants, phytochrome B (PHYB), is excited by both the red wavelengths of light that drive photosynthesis, as well as the near infrared light that is enriched in shady spots. But no one had found a direct link between this response to light and the hormone-driven growth response to shade.

In their study, Chory and her colleagues, including Joseph R. Ecker, a professor in Salk's Plant Molecular and Cellular Biology Laboratory, used biochemical and genomic analyses to identify PIF7, as the key molecular link between a plant's light sensors and production of auxins.

They showed that when a thale cress plant is placed in shade, a cascade of molecular changes occurs in the cells of the leaves: the PHYB photoreceptor causes chemical changes in PIF7, which then activates genes that direct the cell to produce auxin.

"We already knew that auxin is made in the leaves and travels to the stem to stimulate growth," says Chory. "Now we know how shade stimulates the leaves to produce auxin, and it turns out that it's a remarkably simple pathway to control such an important function."

She added that the findings may offer new avenues for developing crops with stem architectures better suited to tightly planted field rows, making them less prone to shade avoidance syndrome. If successful, such crops would produce higher yields of foods and biofuels than existing strains.