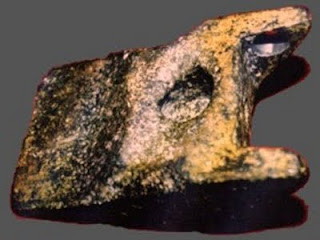 As I have posted in the past, human prehistory is broken into two separate eras. The Holocene (ours)and the Pleistocene. What we have discovered is that the crustal shifting impact of a comet on the northern Ice Cap could only have been deliberate and carefully planned. This implies that mankind arose during the late Pleistocene with modern technology long before this. My best estimate is that this happened around 42,000 BP. or 30,000 years before they caused the caused the Ice Age ending shift around 12900 BP


During this era, the population itself concentrated naturally on the continental shelf were the ocean would establish a stable climate allowing for food production. However, as we do today, penetration onto the highlands would be common. It is reasonable that metal artifacts would be lost from time to time.


However, I must also repeat a caution here. Our own experience shows us that metal is always recycled. At the best grave goods will store some and no more. Recall that every block and cut stone on Giza required a fine bronze saw, none of which have ever been recovered. For all intents and purposes two thousand years of global stone work has nearly zero evidence of the bronze tools.


So finding a Pleistocene metal artifact will be a challenge and we have to accept what we get.


Here we have a lost item that is clearly an aluminum alloy similar to what is used today and it is of a blend that is suitable for casting.

This piece appears to have been cast and machined. The observed oxygenation is readily sufficient to support the artifact been contemporaneous with the kill site. Thus we have a clear antediluvian artifact confirming the existence of a modern civilization. Others also exist and all these have been assiduously ignored by archeologists or at least not speculated on.


The Aluminum Wedge of Aiud

Last week I posted Ancient Anomalies vs Accepted Awareness that referenced enigmatic artifacts found worldwide that simply do not fit the accepted geologic or historical timeline. These ancient anomalies, also referred to as ooparts (out-of-place artifacts), are objects that by scientific measure are very old, but in form or construction appear to be quite modern. If our current history of the world is correct, they just should not exist. And there are many examples...many more than geologists, archaeologists, and other scientists care to admit.


One example I want to emphasis is the Aluminum Wedge of Aiud. This particular artifact is a true enigma...and one of many I would like to examine in upcoming blogs.


In 1974, in Romania, East of Aiud, a group of workers, on the banks of the river Mures, discovered three buried objects in a sand trench 10 meters deep. Two of the objects proved to be Mastodon bones. These dating from between the Miocene and the Pleistocene periods.


The third object, the Aluminum Wedge of Aiud, also known as the Object of Aiud, is a mysterious wedge-shaped block of metal similar in some respects to the head of a hammer. The object was sent to the archeological institute of Cluj-Napoca. The examination of this object showed it to weigh about 5lbs. There are two holes of different sizes. The object has two arms. Traces of tool marks can be seen on the sides of the object and at its lowest part. It measures approximately 8″ x 5″ x 3″.


Furthermore, this strange object is covered with a thick layer of aluminum oxide, which lends credence to its antiquity. After the analysis of this aluminum oxide layer, specialists have confirmed that the object is a minimum of 300 to 400 years old.


The fact that this strange metal object was found alongside Mastadon bones does cause one to wonder and raises many issues. These findings helped to ignite a heated debate within the scientific community.

The results puzzled the researchers because pure aluminum was not readily obtainable until the middle of the 19th century. Aluminum is not found freely in nature, but is combined with other minerals. The manufacturing process requires 1,000 degrees of heat. It has been thought that only in the last 100 years or so has the technology existed to successfully separate the materials from the mineral bearing ore.

Other specialists claim that the object could be 20,000 years old because it was found in a layer with mastodon bone. Perhaps this particular specimen lived in the latter part of the Pleistocene.


Some researchers suppose that this piece of metal was part of a flying object that had fallen into the river. They presume that it had an extraterrestrial origin. Other researchers believe the wedge was made here on Earth and its purpose has not yet been identified.


Not much information can be found on this subject. The lack of data can possibly be explained by the imposed restrictions on archaeology and history by the communist rule of the time.


The Aluminum Wedge of Aiud remains a mystery.


1. The Aluminium Wedge of Aiud (also called the object of Aiud) is a mysterious artifact of uncertain origin in the shape of a wedge, which was found at an archeological site near the Roman town of Aiud, allegedly near by a mammoth skeleton.


It is composed of 89% aluminium covered by a thick oxide layer. The thickness of this oxide layer is said to be confirmation that the object is anachronistic, at least three-hundred or four-hundred years old.

The Aluminium Wedge of Aiud is often cited as "proof" that aliens visited earth at earlier times, because aluminium was difficult to produce in quantity before 1825. Most scientists, however, believe that this object is a fake.


2. The Aluminium Wedge of Aiud (also called object of Aiud) is a mysterious body in form of a wedge, which was found at digging works near the Roman town Aiud. It consists of 89% of aluminium, which is covered by a thick oxide layer.


The thickness of this layer is said to be so strong as it would lay over a million years in the ground. The Aluminium Wedge of Aiud is often citated as "proof" that aliens visited earth at earlier times, because there were no possibilities to produce aluminium before 1825.


Most scientists however, believe that this object, which existence is not clear, is a fake.

A friend of mind and I often argue about carbon dating and other forms of archealogical dating. The argument is basically, just how reliable various methods of aarbon dating really are. It appears from my reserch that there are some legitimate concerns. Being a Christian and Botanist he believes that world may be much younger than many think and that oxygen was in much greater abundance 6,000years ago or so which skews our current methods. Any thought or interesting info on the subject?

Unfortunately the religious crowd push a terribly naive reading and then try hard to squeeze their way past plenty of problems so generated.

Tree ring work has pretty nicely policed carbon dating for the past 6000 years and by now perhaps somewhat further. It means a lucky peat bog somewhere.

The trouble is that the variability is increasing sharply and it all gets pretty fuzzy. The best you can hope for is to show events are generally contemporaneous and that is very helpful.

Dealing with the late Pleistocene we are pretty well on our own and since the bulk of the evidence is underwater anyway, we are pretty hooped. What we get access to is the areas equivalent to our tundra and boreal forest which are effectively unpopulated anyway.

what we need is a developed urban site from 15,000 or more years ago and that is highly unlikely if a modern civilization existed engaged in a planned evacuation scenario.

You are no doubt aware that when the percentages of elements are added up they are larger than the whole... rather than being 100% or less they are 100.905% plus whatever they consider to be "trace amounts of Gallium"

You may wish to check for typos in whatever your original source was or attempt to gain access to the original data as every instance I see listed is similarly flawed.