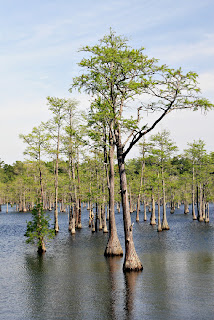 One of the really interesting bits of natural history is the presence of Giant redwoods and its cousins on the west coast of the .  However one argues the case, one assumes that a long evolutionary path exists, yet the available biome is astonishingly small.  It is a question that I would like to see answered.  It may have actually been a recent emergence from what is obviously a very old lineage.

I do not get the impression from the data generally that plant lineages truly go extinct very easily.  I think that they more properly retreat into refugia until conditions return in which they may prosper.  Ne species do emerge and take their own place but rarely are able to chase out completely competition.

That has not been true for animal lineages who can easily be caught in a food crisis in which animals that were never prey are hunted out because no choice exists.  A real crash to the bottom is possible as a result of simple mobility.

Imagine losing its ability to feed any large animal.  After the herbivores are hunted out, the hyenas will eat out all other carnivores rather quickly.

That is surely what happened during the Pleistocene .Nonconformity 12900 years ago.  All the large carnivores who would have been single hunters would have been taken by either a grizzly or a wolf pack in a contracting environment.  Wolves could even clean out grizzlies if grizzlies did not hibernate.  In the dead of winter, packs will congregate in order to take down anything and a grizzly so surrounded would be harried to death unless it were able to retreat to a cave it could easily defend.

Cypress trees, like these, are conifers found on all continents except .


Early members of an ancient family of trees, the cypresses, grew on the supercontinent Pangaea, and when this giant continent split apart, it shaped the future of these trees, according to research that examined the evolution of these trees, which today include giant redwoods and sequoias.

More than 200 million years ago, Pangaea contained all the modern continents, squished up against one another. The separation of these continents isolated populations of living things, putting them on different evolutionary paths.

Scientists have already found evidence of the separation of the continents in the family histories of reptiles, amphibians and mammals.

"Until now, there has been no equivalent evidence for any plant family," writes an international team of researchers in a study published May 1 in the journal Proceedings of the of Sciences.

The cypress family, Cupressaceae, a group of conifers with scalelike leaves, is believed to have originated more than 200 million years ago, when Pangaea was still intact, according to the researchers.

By looking at changes in the DNA (deoxyribonucleic acid, the code that makes up genes) of 122 species of cypress, the researchers were able to reconstruct a timeline for their evolution. They also included fossil evidence in the analysis.

The most recently evolved subfamilies of cypress, Cupressoideae and Callitroideae, split from each other about 153 million years ago, as the two remnants of Pangaea pulled away from each other. The northern half, Laurasia, contained what would become North America, Greenland, Europe and much of Asia, while the southern half, Gondwana, would later become South America, Africa, , Antarctica and .

The legacy remains. Living members of Cupressoideae occur mainly in former Laurasian continents, while Callitroideae are found on the fragments of what was Gondwana, write the researchers led by Kangshan Mao of .

Cypress are now found on all continents except Antarctica, they note.