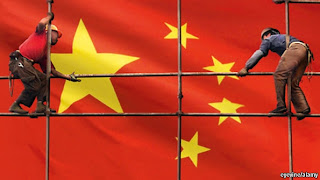 China is presently passing into a period of long overdue consolidation and slower growth. In a way, much is built and it is time to manage it all properly. As this article points out, China is still a long ways to establishing anything close to individual earning parity with the developed world and that is the true point to look for wen unrepairable excesses will bite.


If everyone who can work pretty well has a job then growth must now come from increasing efficiency and the related wages. That wages are in fact rising sharply tells us that this is happening.

Pessimism is seriously misplaced and the longer this period of consolidation plays out, the better for the succeeding expansion. A sustained four percent growth would work extremely well for even a couple of decades. The economy would naturally transition into a consumer society during this.

Most importantly, the country has the time to implement both political and economic reforms although it is pretty obvious that it is high time to allow decision making to devolve to the local level under locally elected officials. That allows all the local stakeholders to sort local issues out and we eliminate the present spectacle of thousands of demonstrations.


How strong is China’s economy?


Despite a recent slowdown, the world’s second-biggest economy is more resilient than its critics think

CHINA’S weight in the global economy means that it commands the world’s attention. When its industrial production, house building and electricity output slow sharply, as they did in the year to April, the news weighs on global stockmarkets and commodity prices. When its central bank eases monetary policy, as it did this month, it creates almost as big a stir as a decision by America’s Federal Reserve. And when China’s prime minister, Wen Jiabao, stresses the need to maintain growth, as he did last weekend, his words carry more weight with the markets than similar homages to growth from Europe’s leaders. No previous industrial revolution has been so widely watched.

But rapid development can look messy close up, as our special report this week explains; and there is much that is going wrong with China’s economy. It is surprisingly inefficient, and it is not as fair as it should be. But outsiders’ principal concern—that its growth will collapse if it suffers a serious blow, such as the collapse of the euro—is not justified. For the moment, it is likely to prove more resilient than its detractors fear. Its difficulties, and they are considerable, will emerge later on.

Unfair, but not unstable


Outsiders tend to regard China as a paragon of export-led efficiency. But that is not the whole story. Investment spending on machinery, buildings and infrastructure accounted for over half of China’s growth last year; net exports contributed none of it. Too much of this investment is undertaken by state-owned enterprises (SOEs), which benefit from implicit subsidies, sheltered markets and politically encouraged loans. Examples of waste abound, from a ghost city on China’s northern steppe to decadent resorts on its southern shores.

China’s economic model is also unfair on its people. Regulated interest rates enable banks to rip off savers, by underpaying them for their deposits. Barriers to competition allow the SOEs to overcharge consumers for their products. China’s household-registration system denies equal access to public services for rural migrants, who work in the cities but are registered in the villages. Arbitrary land laws allow local governments to cheat farmers, by underpaying them for the agricultural plots they buy off them for development. And many of the proceeds end up in the pockets of officials.

This cronyism and profligacy leads critics to liken China to other fast-growing economies that subsequently suffered a spectacular downfall. One recent comparison is with the Asian tigers before their financial comeuppance in 1997-98. The tigers’ high investment rates powered growth for a while, but they also fostered a financial fragility that was cruelly exposed when exports slowed, investment faltered and foreign capital fled. Critics point out that not only is China investing at a faster rate than the tigers ever did, but its banks and other lenders have also been on an astonishing lending binge, with credit jumping from 122% of GDP in 2008 to 171% in 2010, as the government engineered a bout of “stimulus lending”.

Yet the very unfairness of China’s system gives it an unusual resilience. Unlike the tigers, China relies very little on foreign borrowing. Its growth is financed from resources extracted from its own population, not from fickle foreigners free to flee, as happened in South-East Asia (and is happening again in parts of the euro zone). China’s saving rate, at 51% of GDP, is even higher than its investment rate. And the repressive state-dominated financial system those savings are kept in is actually well placed to deal with repayment delays and defaults.

Most obviously, China’s banks are highly liquid. Their deposit-taking more than matches their loan-making, and they keep a fifth of their deposits in reserve at the central bank. That gives the banks some scope to roll over troublesome loans that may be repaid at a later date, or written off at a more convenient time. But there is also the backstop of the central government, which has formal debts amounting to only about 25% of GDP. Local-government debts might double that proportion, but China plainly has enough fiscal space to recapitalise any bank threatened with insolvency.

That space also gives the government room to stimulate growth again, should exports to Europe fall off a cliff. China’s government spent a lot on infrastructure when the credit crunch struck its customers in the West. But there is no shortage of other things it could finance. It could redouble its efforts to expand rural health care, for example. China still has only one family doctor for every 22,000 people. If ordinary Chinese knew that their health would be looked after in their old age, they would save less and spend more. Household consumption accounts for little more than a third of the economy.

Time is on my side

That underlines the longer-term problem China faces. The same quirks and unfairnesses that would help it withstand a shock in the next few years will, over time, work against the country. China’s phenomenal saving rate will start falling, as the population ages and workers become more expensive. Capital is also already becoming less captive. Fed up with the miserable returns on their deposits, savers are demanding alternatives. Some are also finding ways to take their money out of the country, contributing to unusual downward pressure on the currency. China’s bank deposits grew at their slowest rate on record in the year to April.

So China will have to learn how to use its capital more wisely. That will require it to lift barriers to private investment in lucrative markets still dominated by wasteful SOEs. It will also require a less cosseted banking system and a better social-security net, never mind the political and social reforms that will be needed in the coming decade.

China’s reformers have a big job ahead, but they also have some time. Pessimists compare it to Japan, which like China was a creditor nation when its bubble burst in 1991. But Japan did not blow up until its income per head was 120% of America’s (at market exchange rates). If China’s income per head were to reach that level, its economy would be five times as big as America’s. That is a long way off.