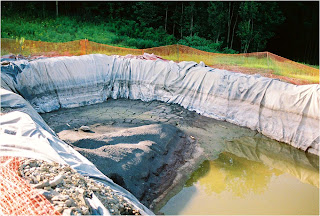 The problem is bone simple.  It is impossible to produce gas or oil without a significant water handling problem.  Fracking by its nature increases the problem surely by an order of magnitude.  The water itself is mineralized once it is finished with and is no longer usable for surface release.  The industry has had two options.  The common one is injection were a dry or already produced formation is used as a reservoir that places it far below the surface and represents no surface danger.  The second alternative is the either throw it in the ocean or to store it forever on the surface. Both these have lousy optics.

The tar sands are quite busy producing their own private salt sea in mostly because they could never get anyone to accept doing a slow release into the which may have at least ameliorated the problem.  The water is recycled a number of times until it is truly briny instead. If a controlled flow was injected into the bottom of the river, it is reasonable that this charge would escape to the with least damage.

This suggests that the best solution is to use recycling to use the water several times before it is finally injected deep.  This can minimize the volume several fold possibly if the tar sands are representative.  They probably already do some of this and likely can do a lot more whenever injection lacks sufficient capacity.

Beyond all that, it is obvious that we have been coping on the ground and by the time a miracle solution arises, it will all be over.  The search for a solution is already decades old.

How Can We Cope with the Dirty Water from Fracking?

Advanced membranes, unusual solvents and new drilling processes could clean and recycle a growing flood of contaminated water
By David Biello | May 25, 2012 |11

Earth Thirst: Solving the Freshwater Crisis New approaches help keep our water supplies safe, but much remains to be done around the world »May 21, 2012

FRACKED WATER: Hydraulic fracturing requires millions of liters of water, and some way of coping with the dirty water that results.Image: © David Biello

The nation's oil and gas wells produce at least nine billion liters of contaminated water per day, according to an National Laboratory report. And that is an underestimate of the amount of brine, fracking fluid and other contaminated water that flows back up a well along with the natural gas or oil, because it is based on incomplete data from state governments gathered in 2007.

The volume will only get larger, too: oil and gas producers use at least 7.5 million liters of water per well to fracture subterranean formations and release entrapped hydrocarbon fuels, a practice that has grown in the U.S. by at least 48 percent per year in the last five years, according to the Energy Information Administration. The rise is quickest in places such as the oil-bearing Bakken Formation in or the natural gas-rich Marcellus Shale underlying parts of , , and .
The problem is that the large volumes of water that flow back to the surface along with the oil or gas are laced with everything from naturally radioactive minerals to proprietary chemicals. And there are not a lot of cost-effective options for treating it, other than dumping it down a deep well. But as certain states that are experiencing drought begin to restrict industrial water usage, fossil-fuel companies are experimenting with traditional and untraditional water treatment chemistries and technologies to try to clean this dirty water—or limit its use in the first place.
Recycling is not enough

The first option is to reuse wastewater in whatever ways possible. For fracking, "to the extent possible, fracturing fluid is recovered and recycled for reuse in future fracturing operations," says Reid Porter, a spokesman for the American Petroleum Institute, an industry group. "Recycling of flow-back water reduces demand for freshwater and reduces the need for disposal of wastewater."
But that water still has to be cleaned before it is reused, otherwise it loses the ability to do its subterranean dirty work. Simply dumping it improperly is not an option, because the high levels of salts and minerals will poison a river, stream or aquifer or it will render land incapable of supporting life for generations, like the salt pans of Utah or the ancient farm fields of Carthage salted by the Roman army. The cleansing technologies employed range from high-tech membranes that selectively filter out specific contaminants to the crude solution of boiling away the water, leaving scales of salts and other minerals behind on the walls of the boiler.
"Most of what we get out of the water are salts and a low-level of organics" (hydrocarbons and other contaminating carbon-based molecules), explains environmental engineer Steve Hopper, executive vice president of the industrial business group at Veolia Water, which is helping oil and gas companies cope with such "produced" water. "We have an example in where we treated the water until it was so pure we had to add minerals back into it to be able to discharge it." The problem, thus far, has been cost, although Hopper argues Veolia's technologies add only "5 percent" to the cost of a given well.
A diversity of waters

To add to the challenge of sheer volume, the water produced by each oil and gas well is often different—with varying levels of acidity, saltiness or types of contaminants, whether dissolved hydrocarbons or heavy metals leached from the surrounding rock.
Traditional wastewater treatment plants, designed to deal with sewage or storm water runoff, cannot cope with these kinds and levels of contaminants. That's where a company like Veolia comes in, which partners with the oil or gas company to assume the liability for the water. "Give us your wastewater and we'll get it where it needs to be," argues geologist Ed Pinero, Veolia's chief sustainability officer.
In California Veolia has partnered with PXP Plains Exploration & Production, an energy company, to design, build and operate a 45,000 barrel-per-day water treatment facility employing ceramic membranes and reverse osmosis to recycle water produced from the Arroyo Grande oilfield near San Luis Obispo. (A barrel of water or oil is 159 liters, or 42 gallons.) Much of the cleansed water would be turned to steam to scour yet more oil out of the ground, and the rest would be clean enough to discharge into local waterways. "We have the technology to meet those requirements," Veolia's Hopper says.
The technologies include membranes, filtration and even selective ion precipitation, where specific chemicals are added to cause particular contaminants, such as heavy metals, to precipitate, or fall out of the water. In certain cases Veolia employs a suite of technologies in a row—bubbling out gas; chemically reducing acidity; filtering; and employing pressure and membranes to extract salts and other contaminants—to deal with a wide variety of contaminated waters, such as that produced from oil and gas wells.
Complications can arise, however: Membranes, for example, often do not stand up to the harsh conditions created by such tainted waters. High acidity or alkalinity, or even just high salinity levels, can quickly foul membranes or simply render them ineffective. Boiling can cost as much as $8.50 per barrel of water, and the residue can quickly wear down even an industrial boiler. So scientists are working on new alternatives.
One option is to cut down on water use in the first place: so-called waterless fracking. A technique offered by the company GASFRAC Energy Services employs high-pressure propane—another hydrocarbon—as a gel in place of water to frack wells. The propane then mixes with the oil or natural gas coming back to the surface and can be used as a fuel, avoiding any of the contamination that leaches out of the rock when water is used. The process is being tested by a variety of companies, including Chevron and Shell.
Another alternative is to use what those who invented it have dubbed a "directional solvent"—liquids that molecularly bind to water but not the other contaminants in it. For example, soybean oil will absorb pure water by bonding to it with heat, leaving any contaminants behind. The water can then be recovered from the solvent by simply cooling it down so that the water flows back out, like cooling air releasing water vapor as rain. "This is the first molecular approach to water treatment," explains engineer Anurag Bajpayee, a PhD candidate at the Massachusetts Institute of Technology working on the new solution. The trick "is finding a solvent that will dissolve water, not dissolve other contaminants and not dissolve itself in water. It is rare."
Soybean oil is not the ultimate solution, of course, because too much oil is required to recover even a little bit of clean water. But the M.I.T. team is working on new alternatives and seeking new solvents with the same properties. At the same time Bajpayee and his colleagues are testing solvents they have already found on produced water from six different wells, including brines eight times saltier than seawater. "It's early, we're not in the field yet," Bajpayee says of the new option for water treatment, which likely will not be commercially available for years. "This is still work in the lab."
Throwing water away

The most common solution, in the end, remains simply to inject the contaminated water down a disposal well that penetrates deeper than any drinking-water resources. More than 90 percent of the water used or produced in oil and gas operations is disposed of in this way, in the nation's more than 150,000 such wells. More and more new disposal wells are being drilled to cope with the rising flood of frack water.
But this injected water is lost forever. Some states such as also make it difficult to drill such wells, which means operators fracking the Marcellus Shale there must pay to truck the produced water to for disposal. That can cost as much as $15 a barrel, and "sooner or later Ohio is going to get a bit panicky about that," Bajpayee notes. In addition, it costs at least $5 million to drill each new disposal well.
In states such as Texas that are enduring prolonged droughts, the millions of liters of water required to frack new wells grows more and more problematic. suspended water use for fracking in some parts of the state this spring due to drought. As Veolia's Hopper argues, "with the water scarcity trends that we see, the trend will be to reduce the net usage of water." After all, reducing the dependence of energy supplies on water—whether drilling for oil and natural gas or generating electricity—will be critical to ensuring there is enough energy and water to go around.