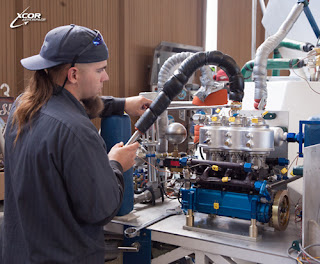 This is an update from XCOR who is developing the LYNX engine system that has proven itself last year. The business of space flight needs superior engines and support technology and private industry is filling that gap wonderfully. Here we have a pump system been checked out for moving low temperature fluids. That is is piston based is a surprise, but it appears to be the better choice.

It is also welcome to hear the drive to contain costs at the same time as developing outstanding performance.

I must admit that I never imagined that we would see a gold rush mentality around space work, but modern engineering has certainly made it possible and plausible. The materials today are almost an afterthought in terms of the development cycle itself. Results can be achieved and tested in simulation before a nickle is spent cutting or casting any part. It has hugely sped up the whole process and today we do not appear to be grinding though multiple physical prototypes in order to get something that barely works.

“For propulsion from 50 to 75,000 lbf thrust, XCOR’s proprietary combined thermodynamic cycle for piston pumps is ideal,” said XCOR CEO Jeff Greason.  “Unlike a turbo pump used in traditional rocket engines, the development cost of a piston pump is much lower and the useful range of thrust is much higher without modification.  Manufacturability is easier, and reliability is considerably higher.  The maintenance cycle is closer to that of an automotive engine rather than ‘disassemble and inspect after every flight’ required with conventional turbo fed systems.  This technology is integrated into the LOX/kerosene propulsion system on our Lynx suborbital launch vehicle, and will be applied to future main propulsion 30,000 lbf thrust LOX/LH2 engines currently under development.”

“The ability to ensure low cost and easy, repeatable manufacturing of critical pump technology over a 30 to 40 year product lifecycle is a major factor in why we chose this piston pump technology,” said Andrew Nelson, XCOR Chief Operating Officer. “This technology is also tightly coupled with certain design decisions regarding manufacturability of our rocket engine chambers and nozzles.  Other rocket engines, nozzles and turbo pumps require time consuming, exotic manufacturing processes, specialty equipment and large cadres of artisan technicians and engineers to assemble and maintain them.  XCOR rocket engines, nozzles and piston pumps can be manufactured by a skilled industrial machine shop and may be assembled by a streamlined workforce and tested with mobile equipment, eliminating fixed test hardware, facilities, and personnel.  Our customers recognize in our technology the ability to contain the costs of developing, extending and maintaining a propulsion system over several decades.”
“At these thrust classes, the weight is comparable to and potentially lighter than a turbo pump system when the entire propulsion package is taken into account,” said XCOR chief engineer Dan DeLong.  “The fuel and oxidizer pump also enables a variety of other innovations, such as our lightweight, highly manufacturable aluminum nozzles.   Our pumps are fabricated using readily available automotive manufacturing techniques developed over the past 120 years.  This allows us to competitively procure high quality components while avoiding the overhead of maintaining a specialized industrial base. This is our fifth generation piston pump; the first generation was internally funded, DARPA helped on the second. XCOR developed internally the pump that eventually went on the X-Racer which was the first designed and optimized for low manufacturing cost. This latest generation is almost 20 times more powerful than the X-Racer pump, but it’s only twice the weight. After more than ten years work, I think we’re getting good at this.”

“The fielding of the LOX pump is a major milestone for XCOR, the Lynx, our wet lease customers and our engine customers,” said Nelson, “I can’t wait to see it powering our engines later this summer!”

XCOR Aerospace is a California corporation located in Mojave, California. The company is in the business of developing and producing safe, reliable and reusable rocket powered vehicles, propulsion systems, advanced non-flammable composites and other enabling technologies like rocket piston pumps that enable full reusability. XCOR is working with aerospace prime contractors and government customers on major propulsion systems, and concurrently building the Lynx, a piloted, two-seat, fully reusable, liquid rocket powered vehicle that takes off and lands horizontally.  The Lynx-family of vehicles serves three primary missions depending on their specific type including: research & scientific missions, private spaceflight, and micro satellite launch (only on the Lynx Mark III).  The Lynx production models (designated Lynx Mark II) are designed to be robust, multi-mission (research / scientific or private spaceflight) commercial vehicles capable of flying to 100+ km in altitude up to four times per day and are being offered globally on a wet lease basis.  (www.xcor.com).

I think you are right & we should come forward to save environment. I have joined gabriel of urantia We run programe to make people aware & to protect environment.

I think you are right & we should come forward to save environment. I have joined gabriel of urantia We run programe to make people aware & to protect environment.