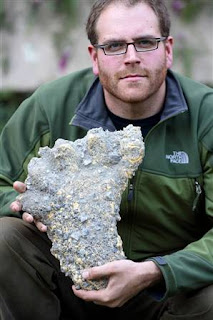 What this means is that the hunt for extant large primates has now become academically acceptable. There has been a number of samples taken over the years and perhaps we can now get such samples investigated properly. Until now it has fallen on the discoverers to champion their case and this has been horribly unsatisfactory.

On top of all this, known sightings are not been investigated properly. A forensic team has a chance to locate shed hair and that could quickly make all the difference.

It is not as if we lack individual sightings. The gross figure is presently in excess of ten thousand. There is enough to organize a police response as standard procedure. This secures the area and identifies tracks if possible. More important the publicity allows witnesses to react by calling after the event for what will most certainly be a once in a lifetime event.

If this effort can be sustained, then evidence will naturally be policed into the data base.

Genetics has shown us that the Neanderthal stock was absorbed into the burgeoning human stock simply because the human life way produced much large populations. It also confirms that the barbaric life way conserved breeding women as a matter of course.

I do not think that the bigfoot could ever be so absorbed, but that they also live in a completely different biological niche has allowed them to remain separate from us.

LONDON -- Scientists are turning to genetic testing to see if they can prove the existence of the elusive hairy humanoid known across the world as bigfoot, yeti and sasquatch.

A joint project between Oxford University and Switzerland’s Lausanne Museum of Zoology will examine organic remains that some say belong to the creature that has been spotted in remote areas for decades.

“It’s an area that any serious academic ventures into with a deal of trepidation ... It’s full of eccentric and downright misleading reports,” said Bryan Sykes at Oxford’s Wolfson College.

But the team would take a systematic approach and use the latest advances in genetic testing, he added.

“There have been DNA tests done on alleged yetis and other such things but since then the testing techniques, particularly on hair, have improved a lot due to advances in forensic science,” he told Reuters.

Modern testing could get valid results from a fragment of a shaft of hair said Sykes, who is leading the project with Michel Sartori, director of the Lausanne museum.

Ever since a 1951 expedition to Mount Everest returned with photographs of giant footprints in the snow, there has been speculation about giant Himalayan creatures, unknown to science.

There have been eyewitness reports of the ’yeti’ or ’migoi’ in the Himalayas, ’bigfoot’ or ’sasquatch’ in America, ’almasty’ in the Caucasus mountains and ’orang pendek’ in Sumatra.

Tests up to now have usually concluded that alleged yeti remains were actually human, he said. But that could have been the result of contamination. “There has been no systematic review of this material.”

The project will focus on Lausanne’s archive of remains assembled by Bernard Heuvelmans, who investigated reported yeti sightings from 1950 up to his death in 2001.

Other institutions and individuals will also be asked to send in details of any possible yeti material. Samples will be subjected to “rigorous genetic analysis”, and the results published in peer-reviewed science journals.

Aside from the yeti question, Sykes said he hoped the project would add to the growing body of knowledge on the interaction between humanity’s ancestors.

“In the last two years it has become clear that there was considerable inter-breeding between Homo Sapiens and Neanderthals ... about 2 to 4 percent of the DNA of each individual European is Neanderthal,” he said.

One hypothesis is that yetis are surviving Neanderthals. The joint project will take DNA samples from areas where there have been alleged sightings to see whether the Neanderthal DNA traces are stronger in the local population.

As for the project’s chances of success? “The answer is, of course, I don’t know,” said Sykes. “It’s unlikely but on the other hand if we don’t examine it we won’t know.”