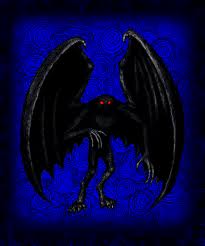 This does not sound like a creature at all, but more like an aircraft of some sort and we may even have an optical illusion at work here. Yet one observer thinks he saw a human like body but that also could be superposition. A fleeting series of observations in directional lighting and at night is pretty dicey and a natural environment for misleading observations. On top of that, the surface was shiny so we have reflected light able to distort things more.

However, such a source could well be the genesis of the moth-man tale itself. Thus we need to pay attention. I do not think that this is a pterodactyl descendent either because that would have been recognized easily.

The red glow in the head is actually our best clue that this is possibly a stealth aircraft at a far greater distance that the mind erroneously shifted to a closer perspective. The conditions were certainly perfect for all that.

I received this information last week from a Mike P., acolleague in Chesapeake, Ohio. I was given the witness contact email at the time. I received a response today. The following is the original email:


Hello - a friend suggested I write to you about something that happened to me several weeks ago. I am divorced and have 2 boys, 15 and 12 years old. Both of my sons were with me at the time of the incident. We live in Huntington, West Virginia - moved here in 2009 from Milwaukee, WI because of my job.


On March 2nd, we were travelling south on Rt. 2 (Ohio River Rd.) just outside of Huntington near Cox Landing Rd. It was around 8:30 PM - we were on our way back home after visiting a co-worker. About a mile past the intersection I noticed something flying from behind a house on the right side. It was hard to make out at first but as it came towards the road it looked like a huge butterfly. Even though it was dark the light from the side of the house illuminated it enough that I could make out a shape. I sped up to avoid coming in contact with this thing but as I did it circled around and flew just ahead of us on our right side. The wings were enormous and broad like that of a butterfly. It was strange because I never saw it flap the wings - almost like it was gliding. My boys were now aware of a it and were terrified. I didn't want to stop the car so I decided to speed up some more. After about 20 seconds it suddenly shot up into the air and disappeared.


One thing I want to mention is that we were under severe storm and flash flood warnings that evening. There were some high wind gusts and hail. There had been several tornadoes southwest of us in Kentucky.

When we got home we talked about it - my oldest boy said it looked like a person dressed in a black shiny suit. He didn't see legs or feet but said the body shape looked like a tall thin man. My youngest boy said he didn't get a very good look but felt like something bad was going to happen. My description is very similar to my oldest son's - but the wings were massive and broad. I'd say the wings may have been over twice the size of the body. The entire thing was dark colored but there was a faint orange glow from the head area - I never noticed a face or other features.


Last week I was talking to a friend and told her about the incident. She found your name and contact information and forwarded it to me. She mentioned something about Mothman sightings in this area and I read some of the stories. I'm not sure if this is the same thing but it does fit the description. There were a few drawings on Google - some are close to what I saw but don't generally match the wing size.

If you have questions please use my email. I'm more curious of what I saw and anything else you can offer. I don't want to believe the Mothman stories but maybe you have an explanation. Thank you for your time – N.R.


NOTE: I received a response from N.R. this morning. Her estimation to the size of this being is a thin 5' body and a wing span of 12-15'. Also that it was black and shiny like 'polished black leather'. N.R. believes that her top speed was around 60 MPH and that it easily kept in front of her. She agreed to publishing the encounter though she doesn't want any personal information disclosed. She is very curious as to what they witnessed. BTW, the location of this sighting is approximately 30 miles south of Point Pleasant, WV...Lon
Posted by arclein at 12:00 AM