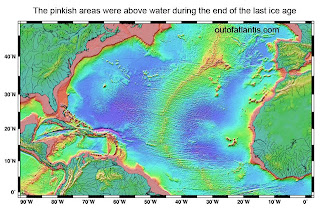 This report brings to us two important maps that are well worth study and are clearly instructive.  Before we start, what I do want to add is that I have been championing the idea that the crust itself was deliberately shifted thirty degrees South through Hudson Bay at the Pleistocene Nonconformity around 12,900 BP.  It is my contention that this was achieved by a targeted impact of a comet on the ice cap near the North Pole then positioned likely in the center of .  The crust there is still rising.

This is controversial of course, but becoming less so with the steady accumulation of evidence.  It was deliberate simply because it was beyond coincidence.

1                    The western half of the was shifted deeply south around the global axis of rotation.  The Northern part of the coast was like today.
2                    The was heavily disturbed with extensive subsidence and upheaval both taking place.  Net curvature change could have been stretching as this part of the crust was approaching the Equator, but this awaits simulation modeling to get right.  It all looks more like a compression event.
3                    This all includes the which received a super push toward compression.
4             This map shows us that it took time for the Caribbean to act as a primary driver of the Gulf Stream, But the shift south strengthened the Atlantic Gyre which began demolishing the Ice Age.  It was obviously enough.
5                    The uplifted Atlantic Ridge was something that I had not previously fully understood.  I certainly was well aware that the crust had hugely rebounded after the ice had left the .  It clearly makes sense that the Atlantic ridge would have been uplifted and subject to subsidence and even catastrophic subsidence.
6                  That of course begs the question of whether this could have held off occurring into historical times or more specifically 1159 BC when heavey volcanism and tsunamis hit in particular and the seaboards generally.
7                    A large remnant may well have remained, whose submergence is the Atlantean Story.  However, that simply puts a convenient way station in the Middle of the that joins the Bahama Bank as sea isolated population bases equal to the task of supporting a large maritime based imperium and culture.
8        On the other side of the world, the Indian Subcontinent was subjected to a massive push pull event that transformed that part of the Globe.

This is the first inkling of a reasonable geological argument in support of a true mid Atlantic land mass that might fit the Atlantean Story that can not be dismissed outright.  It is not needed to make the case as we clearly have a city site at tidewater just south of Seville and the area around Bimini is also a realistic base are that may also have subsided although that is less likely.

It makes the task of establishing trade into the far easier than had been anticipated. We no longer require a brave act of exploration seamanship which was certainly the case in 1492. 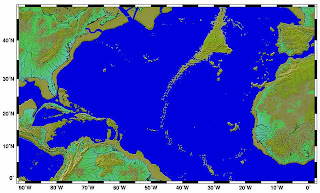 "This map shows the position of the coastline during the height of the last ice age about 18,000 years ago. Seafloor topography clearly reveals the of in the Mid . This area was pushed up to the ocean surface during the height of the last ice age as a reaction to the weight of over 3 km of ice on the poles, which depressed the crust in the Polar regions and caused weak areas of the the crust in mid lattitudes to distend outwards to find an equilibrium." - Robert Sepehr

Posted by David Hatcher Childress, who is one of my Friends on Facebook. Original credit by "Earth, We Are One" on March 5, 2012. The second map below is from the Facebook Atlantis page.

I'll go with the statement-but it is not the standard statement scientists usually make. The landmass on both maps DOES coincide with a map on the Mid-Atlantic Ridge in the Scientific American a while back, indicating the area of a possible earlier large island including the , now sunk into the sea. And Robert Sepehr's statement seems to be correct-the corresponding removal of those icecaps also caused the continental land area to go up and the area of Atlantis to go down (presumably to a matching degree, about 3 kms, although not the same everywhere in the areas affected)

I think pretty strongly that the "Great Plain of Atlantis" is now the bottom of a basin South of the present-day Azores, much lower than the highlands, and would be part of the area ringed with seamounts (then mountains) on both maps, but indicated to have been sea at the time on both maps, This area is geologically peculiar, the bedrock has the characteristics of continental rocks and the sediment upon it has the characteristics of subareal (land) deposits laid down by freshwater. The Azores are East and West from , the Atlantis and Meteor Seamount groups areSouth of them and looking like they are making an island chain to lik up to the Canary Islands off the , and this flat plain would have been betwen the two. The geologic survey information published on this blog earlier lends itself to that interpretation.