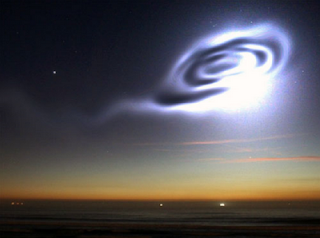 The author has chosen to connect a few of the dots to paint a story based on the old thesis that it is a government plot. If that were all, then perhaps it could fly. Unfortunately mountains of evidence and witnesses have to be explained away and that is were all debunking finally founders.

It is plausible that the CIA ran with it in terms of hoping to confuse the
Soviets. The problem with that is that the soviets had their own evidence and knew better. This would have led to a quick abandonment. The government has simply chosen to ignore the subject publicly since then.

Without a PR budget research naturally stagnates and it is left in the hands of amateurs who are easy to put off. The actual numbers of sightings exceed 100,000 and forms a remarkable bell curve of types and quality.

It is even more plausible that confirmation led to a high level response because it would first appear to be a Soviet threat. Once it became clear that this was not true at all, the interest would have waned simply because we could do nothing about it.

Update from the Center for UFO Truth (CUT)

Winston Churchill’s famous quote that “in wartime, truth is so precious that she should always be attended by a bodyguard of lies” rings as true today in modern warfare as it did back during those precarious WW2 years. But it was the turbulent times of peace that came right after the Great War, which found the West scrambling to avoid yet another world wide armed confrontation, this time because of the rising menace of the Soviet Union. With millions of war dead fresh in the collective consciousness of the conflict weary United States and its allies, these nations contemplated their new found peace and wondered how long it could be maintained.


It was during these nail biting times of extreme anxiety over the Soviet Union’s next move, that intrepid American men took into their own hands the fate of the nation. Drawing upon their considerable success, in partnership with the British, in deceiving the Axis powers during the war as well as their amazing feats of code breaking that turned the tide of battle both in Europe and in the Pacific, a secret cabal of concerned patriots came together with the singular purpose of using their well-honed skills against this new enemy of freedom.


With the Venona Project decodes drying up after Soviet changes, predicting the enemy’s actions without reading their message traffic only exacerbated the growing feelings of the dread that a new war was right around the corner.  But to break the Soviet code required either access to the cryptographic material or the computational power of modern day code breaking computers – the latter did not yet exist and the former was carefully guarded.


So an amazing plan was hatched – to employ a successful technique used during WW2, called “gardening” – which during the War involved the placement of false news stories that the Allies knew the Axis would be interested in, wait for the news stories to be encoded and transmitted by Axis agents, and after intercepting the coded transmissions, the Allies could then work out the code system; already having the known plain text in hand.


But what could possibly arouse the interest of the Soviet Union in American Press articles during a time of peace? Enter the Big Lie – the creation of the modern day UFO myth.


A careful analysis of the events that surround June and July 1947, the birth date of the modern day UFO era shows that what transpired around the well-known UFO cases of Maury Island, Kenneth Arnold, and Roswell itself, was part of a grand deception to convince the Soviets that the United States and its allies had a new secret weapon that would keep the Soviet Union at bay in the event of an armed conflict. Of course no such weapon existed, but that was the plan to begin with - get the Russians to take interest in something so grandiose that ignoring it would not be an option. After all, the Americans beat them to the bomb, and Generalissimo Stalin did not want his empire to be embarrassed once again.


To pull off the most incredible deception in human history, required a very disciplined and select number of likeminded individuals, all with the motive, means and skills to pull it off. At the top of this cabal, an already illustrious American war hero: Army Air Forces General Hoyt Vandenberg. Destined to command the newly founded U.S. Air Force the following year, he conveniently made his move from the Director of the Central Intelligence Group back to Army Air Forces in May 1947, just two months shy of the plan’s execution. Vandenberg could disavow Army Air Force involvement by outsourcing the dirty work of this operation to his former colleagues at the Central Intelligence Group (CIG), the direct predecessor of the modern day CIA. And not just any folks in the CIG, but to an elite unit, known during its WW2 OSS incarnation as X2 - the Counterintelligence branch which subsequently morphed into the CIA’s Office of Special Operations.


So why X-2? On the CIA’s own web site it states that: “William Donovan created the X-2 Branch in early 1943 to provide British intelligence services with a liaison office in OSS for sharing ULTRA. Using ULTRA intercepts, the British security services had captured every German agent in the United Kingdom; some agents were even “doubled” to send a steady flow of plausible but bogus reports to Berlin. British intelligence wanted American help in this campaign, but London insisted that the Americans imitate British security practices to protect the vital ULTRA secret from unauthorized disclosures (even to other OSS personnel). X-2 was the Branch that resulted from this deal; it had its own overseas stations and communications channels and operated in partnership with the British foreign and domestic intelligence services.”


Vandenberg, himself privy to signal intercept intelligence during the War and knowing its immense value, was determined to play the same counterintelligence game with the Soviet Union. Since the extent of Soviet spy networks in the United States was not known, the Big Lie would kill two birds with one stone – code breaking and spy catching.


To kick off the grand deception, the possibility of a secret project had to originate from somewhere outside the armed forces, within the civilian US population, and after it garnered enough public awareness through the mass media, would then feed upon itself in a frenzy of planted stories, continued news hype and the everyday psychological mass hysteria.


Experiencing a few hiccups at the beginning, the deception planners, got the break they needed when an honest All American Kenneth Arnold made their day, by kick starting the operation when reporting what he saw over Mount Rainier. Arnold was not in on the deception, he was just where the planners knew he would be when they orchestrated their bogus flyover; Arnold in pursuit of a $5000.00 reward for a lost Marine transport.


Phase two of the plan was to get the unsuspecting FBI, under J. Edgar Hoover to provide the manpower behind tracking down the interested parties in the “flying saucer” stories. When Maury Island went awry with the death of two Army Air Force Intelligence officers, the FBI did what they do best, an in-depth investigation of Maury Island stooges Dahl and Crisman – just too good for Vandenberg’s liking.  A leak of derogatory comments about the FBI, designed to trigger Hoover’s ego mania and an anti-saucer investigation tirade, put an end to the too-close-for-comfort FBI scrutiny of the involved parties. X2/CIG/CIA was solidly at the helm of the deception and the FBI had to be reined back.

President Truman was also kept out of the loop as well, not unprecedented, since he wasn’t even made aware of the Manhattan Project until after moving from the role of Vice President to President.

At some point, the FBI was brought fully into the fray as they were already knee-deep in the subversive communist problem with Subject Matter-X and Subject Matter-R, concerning the Internal Security of the United States, and it was natural for the FBI to gain full awareness of the operation. I am sure that J. Edgar blew quite a few fuses that day when the CIA finally let him in on the secret.


The missing piece in getting the operation going was to find select individuals in the news wire services and the Press to chop up, dish out and serve the provocative 1947 news stories that would cause illegal agents to scrutinize the areas and people surrounding the UFO sightings and would send Russian legals scrambling to encode the stories for transmission back to Moscow. Yep, the deception planners found who they needed within the Associated Press, United Press and International News Service wire services and within select newspapers across the United States.


The operation succeeded beyond the planner’s wildest dreams, and 60 plus years later, the legacy of their deception operation still survives as a belief system that is as part of Americana as Apple Pie.


But continuing to cover up the Biggest Lie ever told requires ever more elaborate deception techniques, from sending Ufologists and believers down even rosier primrose paths, to mass forging documents that once leaked into the UFO community convince the believer that the “cover up” is deeper and more sinister that even science fiction can portray.


So what proof do I have that anything you have read to now is true? After two years of continuous research, I have amassed official documents that when analyzed through the lens of forensic history, conclusively reverse engineers the greatest deception ever perpetrated in human history.

Ongoing Freedom of Information requests to the FBI, National Archives, CIA, are providing more pieces to the puzzle each day. When enough of the puzzle has been assembled with official source documentation, and sober Americans realize the extent to which they have been deceived, it will be time to call your Congressman and demand that those Federal Agencies who have been part and parcel of the Big Lie – are hauled in to Congressional hearings to admit their complicity and make their amends to the American People. The CIA and FBI are at the top of this list.

Ironically, the CIA who can trace its very birth back to the greatest of all Big Lies, sports a Bible quote on the face of its HQ building in Langley, Virginia which reads— “And ye shall know the truth and the truth shall make you free.” Indeed, it is time we are all set free.
Posted by arclein at 12:00 AM