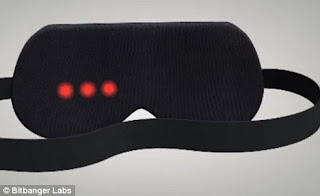 The advent of a slightly better understanding of the condition of lucid dreaming and its close corollary of NDE or near death experience has now opened up the door for technical assistance in the form of hardware and support software.

The reality of lucid dreaming is beyond doubt, so it becomes possible to do things that may make some sense.

As mentioned, it is not that easy, but the tool shown here allows the mind to possibly be trained a lot easier than has been the experience.

The interesting question is the relationship between lucid dreaming and formal meditation itself.

I am most interested in discovering the capacity to discover fresh information that would not be otherwise be acquired. How do we query this unusual state of our minds? My own one experience showed me alternative forms of a well known genus that could exist and a shift in the spectrum that was pleasing but odd. Other information was also gathered through observation that provided a confirmation of reality.

In the event this technology is a good beginning and perhaps it will lead to significant success. And with any new science, we may get some pleasant surprises.

In a twist straight out of the movie Inception, a duo of developers from Brooklyn, New York, have built a sleeping mask designed to allow people to have lucid dreams that they can control.

While it may look like a standard sleeping mask, Remee has been billed as a special REM (Rapid Eye Movement) enhancing device that is supposed to help steer the sleeper into lucid dreaming by making the brain aware that it is dreaming.

The goal of the product is to allow people to have the dreams of their choice, from driving a race car to flying to having lunch with Abraham Lincoln.


In the hit movie Inception, directed by Christoper Nolan and starring Leonardo DiCaprio, a team of corporate spies enter a man's dream to plant an idea into his subconscious. It is set in a world where technology exists to enter the human mind through dream invasion,

Nolan was said to have come up with the idea ten years ago.

The futuristic invention is the brainchild of Duncan Frazier and Steve McGuigan, both aged 30, who have started a company named Bitbanger Labs.

The two friends put up their project on the crowd funding website Kickstarter with the goal of raising $35,000. By this week, more than 6,550 people pledged $572,891 to fund Remee.

The inside of the sleeping mask features a series of six red LED lights that are too faint to wake the sleeper up, but visible enough for the brain to register them.

The lights can be programed to produce a sequence designed by the user.

Sleep stages are divided into two main categories: non-REM and REM. People go back and forth between these stages throughout the night, with REM stages, where most dreaming occurs, lasting the longest towards morning.

Remee apparently notices these longer REM stages and ‘enters’ the dream via the flashing lights. The device will wait for four to five hours for the sleeper to get into the heavy REM stages before the red lights turn on.

The idea is simple: you are playing a perfect round of golf in a dream, and you see a pattern of red lights flashing in the distance.

Because the pattern is in a particular sequence, it would signal to you that you are dreaming, not unlike the totem object in Inception.

Once you realize you are in a dream, you can then decide what happens next, whether it be a quick trip to Antarctica or time travel.

Rather than encumbering the mask with buttons and controls, its inventors set up a website called sleepwithremee.com where users can adjust the setups, such as when to start the light sequence and when to repeat it. The intensity of the lights can also be changed.

Control: Users can adjust the settings on their sleeping mask through a website

He also added that LED lights are not known to cause seizures.

McGuigan said that he uses his Remee several times a week, but he admitted that reaching a state of lucidity can be 'hard' and does not happen every time.

The two inventors began working on the mask last February after reading studies focusing on lucid dreams that were conducted at Stanford University in the 1980s.

That is also when the first models of 'dream machines' were created.

Homemade: The inventors worked on Remee for a year and built the first prototypes themselves at home

However, he said that the early devices were bulky and expensive, some coming with a price tag of $1,000. One of the models was even available though the Skymall catalog handed out on planes, McGuigan said.

Frazier and McGuigan built the first prototype of Remee at home before taking their design to a manufacturer.

The Remee sleeping mask is light and works on tiny 3V coin cell batteries that last for several months since the devices uses up power only when the lights are blinking.

Selection: The Remee is available in five colors (pictured) and costs $95 each

With the funding for the project now in place, people can pre-order the masks. They are available in five color options and are priced at $95 each.

Mr McGuigan said that so far, they have received 7,000 orders, many of them coming from Australia, Italy and Spain.

When Remee was first presented on Kickstarter, customers could also order the masks with customized designs of their choosing, but McGuigan said that this option is no longer available.

Spaced out: Early on, the sleeping mask was available in customized designs featuring images from the Hubble telescope

McGuigan graduated from Lock Haven University with a degree in computer science.


Read more:
http://www.dailymail.co.uk/news/article-2147181/Dream-come-true-Two-mad-scientists-create-sleep-mask-lets-people-CONTROL-dreams.html#ixzz1vc81fwyI
Posted by arclein at 12:00 AM