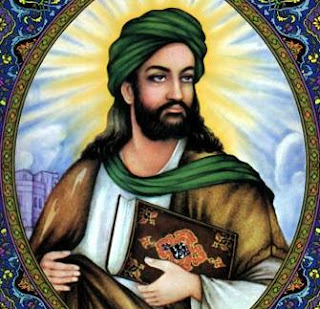 This piece continues the debate regarding the historicity of Mohammad. As stated below, it is completely creditable that a tribal leader organized a successful war machine out of the Arab tribes at a time when local military power was in ebb. The tale of divine inspiration is far less creditable as there we get a picture of clinical epilepsy. Epilepsy does not lend itself to rational scholarship but does scare everyone around that perhaps a divine event is taking place. If anything, it weakens the mind and it is difficult to make progress.

Putting all that aside, we have an Arab headed political regime that was effectively illiterate and needed to structure its culture in competition with the conquered civilized world. It would be completely sensible to produce a Arab scripture and use an Arab friendly alphabet already somewhat in place. After all they had the example before them of Constantinople which had held them off.

That places the Koran as a first example of the political scripture which includes Das Capital, Mein Kamp and Mao's Red book. All are used by States to brainwash the child to become a willing obedient servant to the glory of the State. Properly revealing this purpose may be beyond anyone's capacity but it will still be the final answer to this ideology of hate.

The foreword was written by the eminent scholar Johannes J. G. (Hans) Jansen, an Arabist and a Professor of Modern Islamic Thought at the University of Utrecht in the Netherlands until his retirement in 2008. Among his other accomplishments, he has translated the Koran into Dutch. Jansen points out that what sparse information and physical evidence we do have does not seem to confirm the traditional Islamic accounts of the sixth and seventh centuries.

In fact, archaeological findings contradict the traditional picture. Only further archaeological work in present-day Arabia and Greater Syria can shed more light on these issues. In Saudi Arabia, such excavations are forbidden, and Wahhabi hardliners have actively destroyed some sites. Furthermore, the religious authorities may not be interested in bringing to light findings that might contradict their religious views or undermine Saudi Arabia’s central status in Islam.

As Jansen states, “An Iraqi scholar, Ibn Ishaq (c. 760), wrote a book that is the basis of all biographies of Muhammad. No biographical sketches of Muhammad exist that do not depend on Ibn Ishaq. If an analysis of Ibn Ishaq’s book establishes that for whatever reason it cannot be seen as an historical source, all knowledge we possess about Muhammad evaporates. When Ibn Ishaq’s much-quoted and popular book turns out to be nothing but pious fiction, we will have to accept that it is not likely we will ever discover the truth about Muhammad.”

Moreover, a fully developed Arabic script did not yet exist at the time when the Koran was supposedly collected for the first time, which further introduces substantial sources of error. The Koran itself was probably far less stable and collected much later than Muslims believe.

Finally, the hadith collections which elaborate upon the personal example of Muhammad were developed many generations after the alleged events of his life had taken place, and are considered partially unreliable even by Muslims. It is likely that a great deal of this material was fabricated outright in a process of political and cultural struggle long after the first conquests.

Several contemporary critical scholars — Christoph Luxenberg, for example — have been forced to write under pseudonyms due to persistent threats against their lives. This virtually never happened to scholars in Christian Europe who critically examined the Bible or the historical Jesus during the nineteenth century, but it happens frequently to those who question Islam and its traditions.

One might suspect that the main reason why many Muslims often tend to react with extreme aggression against anyone questioning their religion is because it was originally built on shaky foundations and could collapse if it is subjected to closer scrutiny.

Non-Muslim chroniclers writing at the time of the early Arabian conquests made no mention of the Koran, Islam or Muslims, and scant mention of Muhammad. The Arab conquerors themselves didn’t refer to the Koran during the first decades, quite possibly because it did not then exist in a recognizable form.

Islamic apologists love to talk about the supposedly tolerant nature of these conquests. Yet as historian Emmet Scott has demonstrated in his well-researched book Mohammed and Charlemagne Revisited, the archaeological evidence clearly indicates that the Arab conquests caused great devastation to the conquered regions. Furthermore, we must consider the possibility that Islam as we know it simply did not exist at the time of the initial conquests.

Modern scholars like Patricia Crone have questioned whether Mecca as an important trading city and center of pilgrimage truly existed by the year 600, as Islamic sources claim. Its location makes no sense if it was supposed to be located on the trade routes between the Indian Ocean and Mediterranean Europe. No non-Muslim historian mentions it in any accounts of trade from the sixth or seventh centuries. Given the centrality of Mecca in traditional history, this casts the entire canonical story of the origins of Islam into doubt.

The Koran claims to be written in clear Arabic, but even educated Arabs find parts of it hard to understand. The German philologist Gerd R. Puin, whose pioneering work is quoted by Ibn Warraq in What the Koran Really Says, states that up to a fifth of it is just incomprehensible.

Perhaps one of the reasons why the Koran stresses its Arabic nature may be, ironically, that portions of it were not originally written in Arabic at all, but in related Semitic languages.

Christoph Luxenberg has suggested that some sections of it were originally written in Syriac, a dialect of Aramaic that had long been used as a literary language in much of the Middle East and the Fertile Crescent. He demonstrates convincingly that certain puzzling Koranic verses make more sense if you read them in Syriac. The virgins that brave Muslim men are supposed to enjoy in Paradise (Koran 44:51-57, 52:17-24, 56:27-40) may not be virgins at all, but rather white raisins, or perhaps grapes. Yes, fruit.

It’s possible that some of these Christian Syriac texts were written by a heretical group that rejected the Trinity of mainstream Christianity. It’s certainly true that a few Koranic chapters as we know them are somewhat more tolerant than others, but if we believe this non-traditional reading of history, some of them were based on pre-existing Jewish or Christian texts.

In the final section of the book, Spencer sums up the findings to date. He suggests that Muhammad may have existed as a semi-legendary figure, comparable to Robin Hood, King Arthur or William Tell, whose exploits were greatly elaborated upon by later generations. Yet the traditional account of him as Islam’s founder is riddled with gaps and inconsistencies.

The Arab conquerors may have known some vague monotheism partly inspired by Christians and Jews, but in the generations and centuries after the conquests they abandoned this and developed a more militant creed that came to function as a vehicle for Arab nationalism and imperialism. Perhaps the conquests shaped Islam more than Islam shaped the conquests.

But if someone more or less invented Muhammad, wouldn’t they want to invent a more sympathetic character than the very ruthless and brutal man we see emerge from the traditional accounts? Possibly yes, but as Spencer comments, the Arabs of this age may have thought that such a ruthless character was an inspiration for conquest and empire-building.

It’s open to serious debate whether Muhammad ever existed, but I lean towards concluding that he did, at least in the vague sense of a militant Arab leader who helped unify different tribes and redirect their tribal energy outwards towards the goal of external conquest. This would not be substantially different from the way Genghis Khan managed to unify squabbling Mongolian tribes into a viable Mongol nation capable of conquering a vast empire.

The major difference is, of course, that a new religion was not built around the personality of Genghis Khan. Perhaps we should be grateful for that. Otherwise, the largest voting block at the United Nations might now have been the Organisation of Mongolian Cooperation, and the BBC and the New York Times would warn us against the dangers of Genghisophobia.

Robert Spencer possesses a special talent for presenting complex issues in a way that is accessible and understandable to an educated mainstream audience. His latest work is no exception. Did Muhammad Exist? is a competent and readable introduction to some of the most vexing riddles regarding the true birth of the creed we now know as Islam.