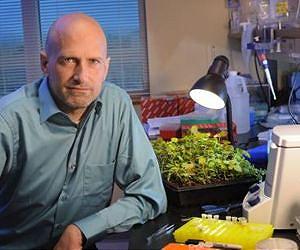 The obvious preventive measure is to tightly control kiwi traffic itself out of China. In the meantime the pathogen itself should be amenable to established control measures and if we are lucky, complete eradication outside its native locale. This needs coordination between regulators and farmers generally, but that has been done before.

In the modern era we are seeing the advent of a number of new cultivators having the advantage of leaving the diseases of their homelands far behind. That is a welcome advantage.

Let us hope control measures will keep it away while we solve this issue.

Associate professor Boris Vinatzer of the Department of Plant Pathology, Physiology, and Weed Science in Virginia Tech's College of Agriculture and Life Sciences was one of the lead researchers who recently tracked a deadly "kiwifruit canker" back to its likely source in China. Credit: Virginia Tech.


An international research team led by Virginia Tech Associate Professor Boris Vinatzer and Giorgio Balestra of the University of Tuscia in Italy has used the latest DNA sequencing technology to trace a devastating pathogen back to its likely origin.

Since 2008, Pseudomonas syringae pv. actinidiae (Psa) has been threatening the world's kiwifruit industry and destroying orchards in Europe, South America, and New Zealand. In the four years since it was first reported in Italy, the "kiwifruit canker" disease caused by Psa has resulted in hundreds of millions of dollars in economic losses.

A similar disease broke out in the 1980s in China and Japan, but nobody knew if it was the same pathogen that is currently wreaking havoc throughout the rest of the kiwifruit world - until now.

Vinatzer and Giorgio published a paper on May 9 in the journal PLoS ONE, which is the first study released in a scientific journal to trace the bacterium back to its likely origin of China.

Vinatzer is an associate professor in the Department of Plant Pathology, Physiology, and Weed Science in Virginia Tech's College of Agriculture and Life Sciences and Balestra is a senior researcher in the Department for Agriculture, Forestry, Nature and Energy at the University of Tuscia.

"It was detective work," said Vinatzer. "By sequencing the DNA, we were able to link all the bacteria back to a strain in China and determine where it probably all began."

When New Zealand reported the disease in 2010, the United States immediately banned all imports of kiwifruit plant material and pollen to keep it from infecting American crops, and so far, the bacteria have not been found in the America. However, if the disease were to break out in the U.S., Vinatzer's research will help slow down its spread - or even eradicate the pathogen - through early and accurate diagnosis.

Vinatzer and his team sequenced the entire DNA of Psa bacteria from kiwifruit trees in China, Italy, and Portugal. They also analyzed some bacteria from New Zealand, where kiwifruits are an almost $1 billion industry. Psa causes a red or white bacterial slime to ooze out of the plant's stems and branches. In the worst case, the entire plant wilts and dies.

To find the root of the disease, the researchers examined how the bacteria may have evolved from the same ancestor by comparing the DNA from the different bacteria to each other.

"The first step in stopping the spread of aggressive bacteria like Psa is knowing where they come from and how they have spread," Balestra said. "Now that we have sequenced the DNA and found its likely origin, we can start to figure out ways to stop it and similar bacteria from doing so much damage in the future."

Besides having direct practical applications, the study will also lead to new insights into the adaptation of bacterial plant pathogens to crops. That is an integral part of Vinatzer's current research funded by the National Science Foundation and for research carried out by Balestra's group on detection of bacterial pathogens, funded by the Italian Ministry of Agriculture and Forestry Policy.

Vinatzer and Balestra were the lead authors of the paper. Angelo Mazzaglia of DAFNE, University of Tuscia, and David Studholme of the University of Exeter in the United Kingdom were co-first authors. Professor David Guttman of the University of Toronto in Canada and Nalvo Almeida at the Federal University of Mato Grosso do Sul in Brazil also contributed their expertise to the team. Virginia Tech undergraduate student Tokia Goodman and graduate student Rongman Cai performed an important part of the experimental work and computer analysis in Vinatzer's laboratory. The full report can be found here.