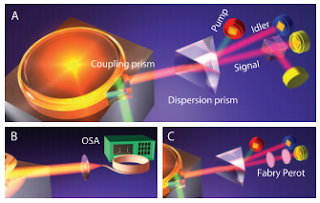 This is neat. The photons are sent and the extra photon acts as confirmation with zero possibility of copying the information. It also can be tuned over a range of wavelengths to provide even more utility.

Copying this signal can only destroy the data and unless it is mirrored somehow it can not be sent on. I will not call it impossible, but anyone trying deserves to pay the big budgets needed to make that happen.

Obviously manipulating a photon is the lower limit when it comes to Moore's Law. It now appears that we will actually reach that limit with this type of work. I always thought we would, but it is nice to see the barriers evaporate.

We've heard much about the possibility of a quantum internet which uses single photons to encode and send information protected by the emerging technology of quantum cryptography.

The main advantage is of such a system is perfect security, the kind of thing that governments, the military, banks and assorted other groups would pay handsomely to achieve.

One of the enabling technologies for a quantum internet is a reliable photon gun that can fire single photons on demand. That's not easy.

One of the significant weaknesses of current quantum cryptographic systems is the finite possibility that today's lasers emit photons in bunches rather than one at a time. When this happens, an eavesdropper can use these extra photons to extract information about the data being transmitted.

So there's no shortage of interest in developing photon guns that emit single photons and indeed various groups have made significant progress towards this.

Against this background, Michael Fortsch at the Max Planck Institute for the Science of Light in Erlangen, Germany, and a few pals today say they've made a significant breakthrough. These guys reckon they've built a photon emitter with a range of properties that make it far more flexible, efficient and useful than any before--a kind of photon supergun.

The gun is a disc-shaped crystal of lithium niobate zapped with 582nm light from a neodymium-doped yttrium aluminium garnet (Nd:YAG) laser. Lithium niobate is a nonlinear material that causes single photons to spontaneously convert into photon pairs.

So the 582nm photons ricochet around inside the disc and eventually emerge either as unchanged 582nm photons or as a pair of entangled photons with about twice the wavelength (about 1060nm). This entangled pair don't have quite the same wavelength and so all three types of photon can be easily separated

The 582 nm photons are ignored. Of the other pair, one is used to transmit information and the other is picked up by a detector to confirm that the other photon is ready form transmission.

So what's so special about this photon gun? First and most important is that the gun emits photons in pairs. That's significant because the detection of one photon is an unambiguous sign that another has also been emitted. It's like a time stamp that says a photon is on its way.

This so-called photon herald means that there can be no confusion over whether the gun is secretly leaking information to a potential eavesdropper.

This gun is also fast, emitting some 10 million pairs of photons per second per mW and also two orders of magnitude more efficient than other photon guns.

These guys can also change the wavelength of the photons the gun emits by heating or cooling the crystal and thereby changing its size. This rainbow of colours stretches over 100nm (OK, not quite a rainbow but you get the picture).

That's important because it means the gun can be tuned to various different atomic transitions allowing physicists and engineers to play with a variety of different atoms for quantum information storage.

All in all, an impressive feat and clearly an enabling step along the way to more powerful quantum information processing tools.