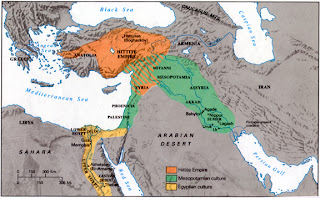 As recent postings have steadily discovered, Bronze Age maritime trade was centered on and the Nile Delta as that was the primary choke point for all trade.  From there it reached out and touched Bali and to the East and from the West they established and Bimini.  Those appear to be the main centers of activity, however there were innumerable trade factories supported through these bases.  A great surge of discovery occurred with the building of the Great Pyramid in 2420BC and it is reasonable to presume that inside even a generation or two that all the factory infrastructure was already founded.

This also means that communication was sustained until 1159BC or for a full 1400 years although Thera destroyed the strongest part of this system around 1600 BC.

During this time period major changes took place in humanity’s intellectual tool kit that can no longer be treated in isolation or under the presumption of local improvement.  Most noteworthy we discover that switched from pictographs to cuneiform writing.  It is reasonable that the advent of the metals trade created demand for semi universal scripts that worked better than local systems too tied to local language forms.

At the same time the knowledge of astronomy was well advanced already as shown by both the Great Pyramid and .  What needed to evolve was the number system and we see evidence of actually more than one attempt.  In particular, the Mayan method stands out as an excellent system that failed to produce a mathematica and stagnated.  The geometry of construction and land surveying produced the core of the initial foundation of mathematics.

All this evolved into the state that was restored by the Greeks 2500 years ago and built upon.

The Greeks themselves fled the Baltic in the aftermath of the 1159 Hekla tsunami that ended the Bronze Age of Atlantis, taking with them their heroic epics that were later written out by Homer in .  Along the way they gained possession of materials held in former Atlantean trade factories and collected additional material from .

Our best written records of the Bronze Age come form and we can assume that this also reflects the standard throughout the world.  Material we associate with the Bible was all part of this era and has been our best informant even if its viewpoint appears narrow.  What we associate with history and knowledge generally was a much later development and we need to contain our disappointment that ancient informants lack our sensibility.
Posted by arclein at 12:01 AM