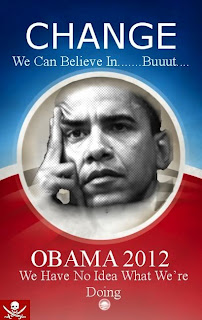 It is pretty bad when fellow running dogs notice that doing nothing is not good enough.  The real problem that he faces is rather simple.  If he tries to lay out a plan, he will draw attention to the fact that he has had no plan.  Thus Romney is simply stating he will do better and that is a pretty low bar.

If Romney gets away with it, he will not have his hands tied at all.

I am glad that someone has heard of Glass Steagall.  Has it occurred once to these fools that had the law stayed in place, the 2008 collapse would never have happened in the first place?  The difference with investment skill and brokering is the difference between Warren Buffet and your uncle Luigi at the craps table.

Most presidents have had more than a passing involvement with the securities industry and learned the necessary lessens that make the consumer of economic advice properly careful.  I have never seen Obama show a clue and the lack of attention merely underlines that.  It was the national problem and he failed to accept that.

Why “We’re on the Right Track” Isn’t Enough, and What Obama’s Plan Should Be for Boosting the Economy

President Obama’s electoral strategy can best be summed up as: “We’re on the right track, my economic policies are working, we still have a long way to go but stick with me and you’ll be fine.”

That’s not good enough. This recovery is too anemic, and the chance of an economic stall between now and Election Day far too high.

Even now, Mitt Romney’s empty “I’ll do it better” refrain is attracting as many voters as Obama’s “we’re on the right track.” Each man is gathering 46 percent of voter support, according to the latest New York Times/CBS poll. Only 33 percent of the public thinks the economy is improving while 40 percent say they’re still falling behind financially — an 11 point increase from 2008. Nearly two-thirds are concerned about paying for housing, and one in five with mortgages say they’re underwater.

If the economy stalls, Romney’s empty promise will look even better. And I’d put the odds of a stall at 50-50. That puts the odds of a Romney presidency far too high for comfort. Need I remind you that Romney enthusiastically supports Paul Ryan’s wildly regressive budget, and as president would be able to make at least one or possibly two Supreme Court appointments, and control the EPA and every other federal agency and department?

The Obama White House should face it: “We’re on the right track” isn’t sufficient. The President has to offer the nation a clear, bold strategy for boosting the economy. It should be the economic mandate for his second term.

[ I am sorry, but this needed to be done when he entered office.  It is way too late now and well nigh impossible to do politically ]

It should consist of four points:

First, Obama should demand that the nation’s banks modify mortgages of homeowners still struggling in the wake of Wall Street’s housing bubble — threatening that if the banks fail to do so he’ll fight to resurrect the Glass-Steagall Act and break up Wall Street’s biggest banks (as the Dallas Fed recently recommended).

[That is the least that should have been done from the get go, but then who understands Glass Steagall?]

Second, he should condemn oil speculators for keeping gas prices high — demanding that the oil companies allow the Commodity Futures Trading Corporation to set limits on such speculation and instructing the Justice Department to investigate and prosecute oil price manipulation.

Third, he should stand ready to make further job-creating investments in the nation’s crumbling infrastructure, and renew his call for an infastructure bank. And while he understands the need to reduce the nation’s long-term budget deficit, he won’t allow austerity economics to take precedence over job creation. He’ll veto budget cuts until unemployment is down to 5 percent.

Finally, he should make clear the underlying problem is widening inequality. With so much of the nation’s disposable income and wealth going to the top, the vast middle class doesn’t have the purchasing power it needs to fire up the economy. That’s why the Buffett rule, setting a minimum tax rate for millionaires, is just a first step for ensuring that the gains from growth are widely shared.
The President can still say we’re on the right track. But he should also say he’s not content with the pace of the recovery and will do everything in his power to quicken it. And he should ask the American people for a mandate in his second term to make the economy work for everyone, not just those at the top.
Such a mandate can be put into effect only with a Congress that’s committed to better jobs and wages for all Americans. He should remind voters that congressional Republicans prevented him from doing all that was needed in the first term, and they must not be allowed to do so again.
This post originally appeared at Robert Reich’s Blog and is posted with permission.