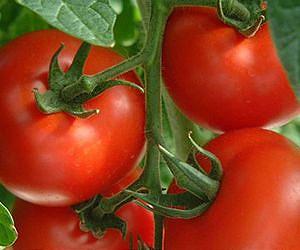 Somehow after all these years someone is well on the road to fixing the flavor problem with tomatoes.


A favorite summer fruit for farm kids is to go pick a ripe tomato and cut it open and sprinkle either salt or a little sugar on the cut surface and eat it just as is. This is hardly worth it with the supermarket produce that is already a couple of days picked or ripened indoors anyways.


It is one of the reasons everyone grows tomatoes in their back yard no matter how cheap the product in the stores.


The apparent complexity involved here is amazing but somehow we knew that anyway. Other produce have a bit of this immediacy but none are so pronounced as the tomato. Let us hope that it is soon. All I want is a fresh sun-ripened beefsteak in the hot august sun.


The secret to good tomato chemistry


A sophisticated statistical analysis of the chemistry and taste test results showed that flavor intensity traces to 12 different compounds and sweetness to another 12, including 8 that were also important for overall flavor.


There is nothing better than a ripe, red, homegrown tomato, and now researchers reporting online in Current Biology, a Cell Press publication, have figured out just what it is that makes some of them so awfully good (and your average supermarket tomato so bland). "We now know exactly what we need to do to fix the broken tomato," said Harry Klee of the University of Florida.


Tomato flavor depends on sugars, acids, and a host of less well-defined aroma volatiles (so named for the ease with which they vaporize, sending scent molecules into the air). Klee's team set out to define the chemicals that are most important to our fondness for one particular tomato or another.


First, they assembled chemical profiles of 278 tomato samples representing152 heirloomvarieties, most of which were bred before the ubiquitous commercial tomatoes of today even existed. That effort turned up an unexpectedly large chemical diversity within the heirloom tomatoes-with variation in some volatile contents of as much as 3,000-fold across cultivars.


That diversity presented the researchers with an opportunity to really explore what makes consumers favor one tomato over another. They did a series of taste tests with a consumer panel using a subset of those heirlooms that represented the most chemical diversity.


Panelists rated their overall liking of each variety as well as the overall tomato flavor intensity, sweetness, and sourness. Panelists also rated supermarket tomatoes in the same way.


A sophisticated statistical analysis of the chemistry and taste test results showed that flavor intensity traces to 12 different compounds and sweetness to another 12, including 8 that were also important for overall flavor.


The researchers also found that some flavor volatiles influence the perception of sweetness through our sense of smell. "In other words," Klee says, "there are volatile chemicals unrelated to sugars that make things taste sweeter."


That raises the tantalizing possibility that this feature might be played up in tomatoes and other foods to make us experience no-calorie sweetness through our noses instead of our tongues.


The analysis also showed that some of the volatiles most abundantly present in tomatoes offer little in terms of our enjoyment of them in comparison to other and much more rare ingredients bring good flavor in commercial tomatoes," Klee says, and that could go a long way.


"Consumers care deeply about tomatoes," he says. "Their lack of flavor is a major focus of consumer dissatisfaction with modern agriculture. One could do worse than to be known as the person who helped fix flavor."