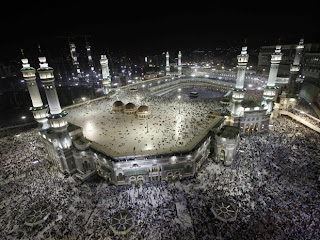 In general since the advent of the Arab Spring, I no longer think it needs to come to that at all. Middle class values soon trump barbarism and peoples make up their own minds about what is right or wrong and snuff out folly on their own.

Not surprisingly the USA is taking it experience against the Nazis to heart and is and will plan accordingly against the day of a total World War against Islam. I came to this conclusion a long time ago.

I simply do not see it happening. Not only is the Arab world in total disarray, they refuse to even talk to each other. On top of this all the remaining autocrats are confronting their demise to populous government.

These populous governments have begun the nasty task of grinding up their radical elements. It promises to take a long time. While this is happening, they also have to usher their population into a modern economy which clearly dissolves away the radical aspects.

The shoe that has not fallen yet is the sudden demise of the global oil industry. It is certain to happen and it will be soon. It will also be swift. This means that the Arab world will have to learn in a hurry how to operate a productive economy. So far it has been clearly halfhearted, but it has at least begun.

Beyond that, any war with the mullahs will be a war of liberation and a body blow to Shiite Islam and I do not see them lasting long enough to make good on their threats anyway.

So this is pretty optimistic with plenty of ongoing opportunity to have panic attacks.

Muslim pilgrims circle the Kaaba at the Grand mosque, on the last days of the annual haj pilgrimage, in Mecca November 8, 2011.

WASHINGTON — A course for U.S. military officers has been teaching that America’s enemy is Islam in general, not just terrorists, and suggesting that the country might ultimately have to obliterate the Islamic holy cities of Mecca and Medina without regard for civilian deaths, following Second World War precedents of the nuclear attack on Hiroshima or the allied firebombing of Dresden, according to documents obtained byWired.com’s Danger Room blog.

The Pentagon suspended the course in late April when a student objected to the material. The FBI also changed some agent training last year after discovering that it, too, was critical of Islam.

The teaching in the military course was counter to repeated assertions by U.S. officials over the past decade that the U.S. is at war against Islamic extremists, not the religion itself.

“They hate everything you stand for and will never coexist with you, unless you submit,” the instructor, Army Lt. Col. Matthew Dooley, said in a presentation last July for the course at Joint Forces Staff College in Norfolk, Virginia. The college, for professional military members, teaches midlevel officers and government civilians on subjects related to planning and executing war.

Dooley also presumed, for the purposes of his theoretical war plan, that the Geneva Conventions that set standards of armed conflict are “no longer relevant.”

He adds: “This would leave open the option once again of taking war to a civilian population wherever necessary [the historical precedents of Dresden, Tokyo, Hiroshima, Nagasaki being applicable...].”

His war plan suggests possible outcomes such as “Saudi Arabia threatened with starvation … Islam reduced to cult status” and the Muslim holy cities of Mecca and Medina in Saudi Arabia “destroyed.”
The college did not respond to The Associated Press’ requests for copies of the documents, but a Pentagon spokesman vouched for their authenticity. Dooley still works for the college, but is no longer teaching, Joint Chiefs Chairman Gen. Martin Dempsey said.

US Secretary of Defense Leon Panetta(L) and Chairman of the Joint Chiefs of Staff General Martin Dempsey during a press briefing at the Pentagon in Washington, DC, May 10, 2012.

Dooley refused to comment to the AP, saying “Can’t talk to you, sir,” and hanging up when reached by telephone at his office Thursday.

A summary of Dooley’s military service record provided by Army Human Resources Command at Fort Knox, Kentucky, shows that he was commissioned as a second lieutenant upon graduation from the U.S. Military Academy at West Point in May 1994. He has served overseas tours in Germany, Bosnia, Kuwait and Iraq. He has numerous awards including a Bronze Star Medal, the fourth-highest military award for bravery, heroism or meritorious service.

In what he termed a model for a campaign to force a transformation of Islam, Dooley called for “a direct ideological and philosophical confrontation with Islam,” with the presumption that Islam is an ideology rather than just a religion. He further asserted that Islam has already declared war on the West, and the U.S. Specifically.

“It is therefore illogical” to continue with the current U.S. strategy, which Dooley said presumes there is a way of finding common ground with Islamic religious leaders without “waging near ’total war,”’ he wrote.

The course on Islam was an elective taught since 2004 and not part of the required core curriculum. It was offered five times a year, with about 20 students each time, meaning roughly 800 students have taken the course over the years.

Though Dooley has been teaching at the college since August 2010, it was unclear when he took on that particular class, called “Perspectives on Islam and Islamic Radicalism.”

The joint staff suspended the course after it had received a student complaint, and within days Dempsey ordered all service branches to review their training to ensure other courses do not use anti-Islamic material.

On Thursday, Dempsey said the material in the Norfolk course was counter to American “appreciation for religious freedom and cultural awareness.”

“It was just totally objectionable, against our values, and it wasn’t academically sound,” Dempsey said when asked about the matter at a Pentagon news conference. “This wasn’t about … pushing back on liberal thought; this was objectionable, academically irresponsible.”

In his July 2011 presentation on a “counterjihad,” Dooley asserted that the rise of what he called a “military Islam/Islamist resurgence” compels the United States to consider extreme measures, “unconstrained by fears of political incorrectness.”

He described his purpose as generating “dynamic discussion and thought,” while noting that his ideas and proposals are not official U.S. government policy and cannot be found in any current official Defence Department documents.

A Pentagon inquiry is seeking to determine whether someone above the professor’s level is supposed to approve course materials and whether that approval process was followed in this case, said Col. Dave Lapan, spokesman for Dempsey.

The problem of negative portrayals of Islam in federal government is not new. A six-month review the FBI launched into agent training material uncovered 876 offensive or inaccurate pages that had been used in 392 presentations, including a PowerPoint slide that said the bureau can sometimes bend or suspend the law in counterterror investigations.

That is significant because ever since the terrorist attacks of Sept. 11, 2001, the FBI has stressed the importance of working with leaders in the Muslim community as an important part of the battle against terror. The FBI review began last September after Wired.com reported that the FBI had discontinued a lecture in which the instructor told agent trainees in Virginia that the more devout a Muslim is, the more likely he is to be violent.