The Next Yellowstone Supereruption Is Closer Than You Think 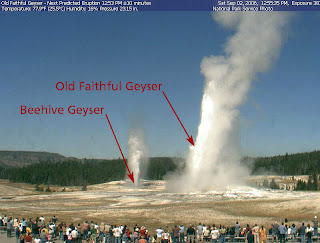 What it tells us is that an eruption can happen a lot sooner and also be smaller. In fact it appears probable as the original super eruption put so much material out and created a huge caldera.

What we do not have is a sense of time. A cubic mile per year for six thousand years will look quite the same in geologic record when compared to six thousand cubic miles in one year. One gives us extinction while the other makes us annoyed.

All this informs us that the total volume can be seriously misleading. The big events have happened and have been destructive. However, they have not driven life to extinction except locally and rarely.

The Next Yellowstone Supereruption Is Closer Than You Think

According to the the researchers from Washington State University and the Scottish Universities Environmental Research Centre, the next eruption may not wipe out half of the United States, covering the rest in 3 feet of ash and pushing the world into hundreds of years of nuclear winter, challenging human civilization to a game of death and survival. That's what a previous study from the journal Earth and Planetary Science Letters posited. Again, very good news.

But on the other hand, as Ben Ellis—a post-doctoral researcher at Washington State University's School of the Environment and co-author of this most recent study—says: "the Yellowstone volcano's previous behavior is the best guide of what it will do in the future. This research suggests explosive volcanism from Yellowstone is more frequent than previously thought."

Their new research shows that what scientists thought was Yellowstone's biggest eruption, the origin of the the 2 million year old Huckleberry Ridge deposit, was actually two eruptions 6,000 years apart from each other. They used a new high-precision argon isotope dating technique to find this difference. This technology, says co-author Darren Mark, is "like getting a sharper lens on a camera. It allows us to see the world more clearly."

The result is that the first eruption that created Huckleberry Ridge was "only" 2,200 cubic kilometers, roughly 12 percent less than what geologists thought. Then a second eruption happened 6,000 years later, adding the remaining 290 cubic kilometers.

For comparison, Mount St. Helens produced 1 cubic kilometer of ash in its 1980 eruption. And the latest comparable eruption registered in the United States were the 116 cubic kilometers of ash produced by Mount Mazama in Oregon, 6,850 years ago.

Somehow, the idea of the Yellowstone super-volcano eruption being 12-percent less powerful than previously thought but more frequent doesn't make me feel much better.