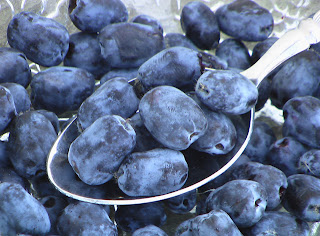 This will become the new commodity fruit and the first seriously commercial cultivar that can be grown in the boreal forest. That it tastes like a combination of a blueberry and a raspberry is wonderful. The nutrient load will be excellent, it will surely provide an excellent dried fruit and it will surely lend itself to all the other processing methods we apply to both berries. I suspect that it may even provide a very viable wine and vinegar.

Although it will certainly be grown on normal farmland it will also encourage the development of fields for the first time in the boreal forest.

As you may recall, canola was just a good idea thirty years ago. This fruit is as big. It will be a first fresh fruit in the spring and be available for at least a month and possible two once they tweak it a bit. It will overlap the later blueberry market and provide frozen product year round.

It is also obvious that this fruit will be competitive with grapes in the global market.

The one plant you should grow this year

By Caitlin McCormack Shine On – Fri, 4 May, 2012 11:19 AM EDT
http://ca.shine.yahoo.com/blogs/shine-on/one-plant-grow-151938773.html
Growing your own produce during the summer months is a great way to eat more local and organic, and it can also help you slash your grocery bill costs.

Which is why we recently spoke with gardening guru Peter Cantley, vice-president, floral and garden for Loblaws to find out the one plant everyone should grow this year in to get the best bang for their buck.

If he had to pick just one edible to grow, Cantley says the haskap bush would be his pick.

"This is a very new, very hardy fruit bush that has been developed at the University of Saskatchewan," he says. Shaped like an elongated grape and dark blue in colour, the fruit "Tastes like a cross between a raspberry and a blueberry."

The haskap's fruit is one of the earliest to produce and the bush is hardy enough to grow pretty much anywhere in Canada says Cantley. Plants generally grow 4-5 feet tall.

You can use haskap berries (also known as honeyberries) in jam, pies, or just eating fresh right off the bush. Haskap.ca has several recipes you can try.

High in vitamins C and A, the berries also pack a healthy punch of fibre and potassium and contain high levels of antioxidants.

Haskap Breeding at the University of Saskatchewan

Department of Plant Sciences, University of Saskatchewan, SK S7N 5A8

Haskap berries (also known as Blue Honeysuckles, Honeyberries, and Lonicera caerulea) are an exciting new fruit crop for Canada. Tasting great and ripening in mid June, they appear to have few insect pests and diseases making it a worthwhile crop to consider for organic production. As a new crop, no pesticides are registered and after 7 years of observation, it appears none are needed. Perhaps its early ripening habit allows the fruit to escape insect damage. Within our collection there are many lines that show high resistance to the few leaf diseases that have occurred. Our collection includes 85 clones from Russia, Japan, Kuril Islands and wild plants from Canada. We also have thousands of hybrid seedlings. Known for health benefits in Eastern Europe and Japan, we plan to investigate our collection for high antioxidant levels as well as breeding for good flavour. Our breeding program is quite unique since we are breeding this crop to be adapted to mechanical harvesting and processing which could allow this crop to be grown on a large scale.

Haskap berries are an exciting new fruit crop for Canada. Ripening weeks before strawberries, they have a flavour commonly described as a combination of blueberries and raspberries. The plants bear at a very young age and the fruit are easily shaken off at harvest time. They may be ideally suited for mechanized harvesting since they don’t sucker, and have bushes of a similar size to other fruits that are harvested by machines. They have been used in a wide range of products.

Lonicera caerulea is a circumpolar species native to the northern boreal forests and can be found in mountains as well as marshlands. Although harvested from the wild for centuries in Japan and Russia, breeding programs began the 1950’s in Russia and in the 1980’s in Japan. Only in the late 1990’s did the only two breeding programs in North America begin at Oregon State University and the University of Saskatchewan. The later two institutions are actively working with each other. Dr. Bors has for two years visited Oregon during harvest season to assist with the selection process.

The U of S owes its entire collection of Japanese Haskap to Dr. Maxine Thompson at Oregon State University.

The germplasm collection comes from 4 areas (see figure 1) which have distinct attributes for breeding (table 1). While we have had experience with Russian and Kuril Island accessions for 7 Haskap Breeding at the University of Saskatchewan

Figure 1. Origin of Lonicera caerulea germplasm collection at the U of Syears, only in the last 2 years have we obtained Saskatchewan and Japanese accessions. As a whole, minimal insect damage and few diseases have been noted, indicating this crop could be suited for organic production.

Russian Cultivars have been observed in the field with a goal to identify the best varieties to be used as parents in the breeding program. 14

Kuril types were very similar in most traits but 2 selections had fruit that did not bleed from the stem end when picked. Japanese selections were evaluated for fruit size, plant health and productivity in Oregon but clones of the best selections are being grown in pots and will be used for breeding.

Figure 3: Haskap berries are put through a sorting line and observed for damage.

Figure 2: to mimic mechanized harvesting, haskap bushes are shaken into umbrellas. The amount of fruit remaining on bushes after shaking was noted. The plants pictured are 3 years old and approximately 1/4” their eventual size.Although 95% of the Japanese seedlings survived the winter of 2005/6, the plants were below the snow line which would not be a good test for cold hardiness.

Over 1200 seedlings derived from Russian and Kuril Island parents were old enough to be evaluated. Desirable plants were tagged in the field and individually harvested. Plants were not picked by hand, as is the case in most places where this crop is grown, but instead were harvested by shaking into umbrellas (Figure 2) to mimic mechanical harvesting. Berries were put through a sorting line, and evaluated for damage (Figure 3 and 4). All tagged selections were evaluated for yield but only the more promising ones were further evaluated for fruit size, flavour, and shape.

It was noted that the crosses between Russian and Kuril Island selections resulted in several selections having fruit weights between 1.2 to 1.6 grams per berry. Yet, Russian cultivars and Russian x Russian’ seedlings had fruit in the range of 0.5 to 0.9 grams. Berries of the Russian x Kuril Island hybrids had a more rounded shape (Figure 5) which was a desirable trait in the sorting line and later in the season it was noted that those hybrids had little or no powdery mildew. An informal taste panel of growers and researchers tasted the advanced selections and found them to be very acceptable. The selection that had 1.6 gram berries is being considered for release as a new cultivar. Other selections will be made available for testing by growers interested in commercial production. They are currently beipropagated in tissue culture.

In addition to agronomic criterion, we are developing protocols to allow us to select for high anti-oxidant genotypes in our breeding program.

Figure 4: Fruit size and shape affects performance in the sorting line. Small (A) and pointed (B) berries often got stuck in the machine and on the belts. Medium-sized berries of Russian selections (C) had less problems but larger, rounded fruit of ‘Kuril Island x Russia’ types (D) were optimum.

Figure 5: Berry of a Russian x Kuril Island hybrid. Similar in length but twice as wide, many of these
hybrids had larger berries than any of the Rusian cultivars in our collectio

Further information on Haskap research can be found at www.haskap.ca or by searching ‘Haskap’ at www.usask.ca
Posted by arclein at 12:00 AM