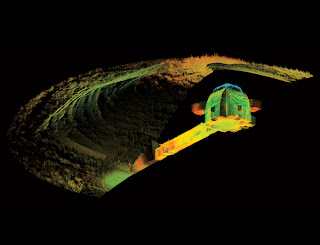 This is a welcome imaging approach and it puts these monuments fully into the public eye as they can now be simulated to any scale.  The Great Pyramid is surely high on the list as it is becoming difficult for the individual to do much at all in real terms.

This also provides an excellent tool for planning further work as it will speed the type of work that uncovers undiscovered chambers.

There is little that interests me more than to determine the accurate measures in and around old monuments.  I devoted two chapters to reconstructing the art of Bronze Age mathematics in my unpublished manuscript Paradigms Shift along with a chapter outlining how to build the Great Pyramid, on Bronze Age time and budget.  It does not make much use of ramps.

I am sure that this methodology will soon be well used.

EVEN 5000 years ago, Britons were an understated bunch. About 250 years before work began on Egypt's ostentatious Great Pyramid of Giza, the early settlers of Orkney, off the north coast of Scotland, were building impressive stone chambers of their own - and burying them under mounds of dirt. Now, intensive laser scanning makes it possible to virtually peel away the mud, revealing one of those chambers in all its glory.

This is Maeshowe, a 3.8-metre-tall tomb chamber reached via a narrow passage 11 metres long. Maeshowe is one of several Neolithic monuments that comprise the Orkney UNESCO World Heritage Site. It was scanned by a team from the of Art's Digital Design Studio and the government agency Historic . The team is scanning 10 World Heritage Sites, five of which are in , for the Scottish Ten project. "We scanned Mount Rushmore [National Memorial] in the in 2010," says Lyn Wilson of Historic .

All the sites are tourist attractions, which can make conserving them a challenge. The scans, accurate to within 6 millimetres, will form an invaluable record to monitor future wear and tear.

Not all damage made by visitors is unwelcome, though. A thousand years ago, Orkney was under Norwegian rule and Maeshowe was plundered. The robbers left behind the largest collection of runes known outside , carved into the stone. These, too, have been laser-scanned in sub-millimetre detail. That's pretty impressive for 1000-year-old graffiti