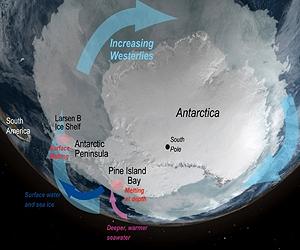 A huge chunk of ice is positioned under up slope pressure on top of a basin that could undermine what retention exists. If as and when we have a major collapse, this mass would surely be the first to cascade into the ocean.

Present work is obviously beginning to uncover such high risk situations that can and will happen in the future. The sheer mass of ice is astounding. It gives us a sense of what happened when the northern ice age ended. When did the Hudson Bay Ice mass float?

Antarctic is a living Ice Cap that is in no danger of ever disappearing until the Antarctic Plate drifts north thirty degrees. That is a very long time away.

Using ice-penetrating radar instruments flown on aircraft, a team of scientists from the U.S. and U.K. have uncovered a previously unknown sub-glacial basin nearly the size of New Jersey beneath the WestAntarctic Ice Sheet (WAIS) near the Weddell Sea. The location, shape and texture of the mile-deep basin suggest that this region of the ice sheet is at a greater risk of collapse than previously thought.

Team members at The University of Texas at Austin compared data about the newly discovered basin to data they previously collected from other parts of the WAIS that also appear highly vulnerable, including Pine Island Glacier and Thwaites Glacier. Although the amount of ice stored in the new basin is less than the ice stored in previously studied areas, it might be closer to a tipping point.

"If we were to invent a set of conditions conducive to retreat of the WestAntarctic Ice Sheet, this would be it," said Don Blankenship, senior research scientist at The University of Texas at Austin's Institute for Geophysics and co-author on the new paper.

"With its smooth bed that slopes steeply toward the interior, we could find no other region in West Antarctica more poised for change than this newly discovered basin at the head of the Filchner-Ronne Ice Shelf. The only saving grace is that losing the ice over this new basin would only raise sea level by a small percentage of the several meters that would result if the entire West Antarctic Ice Sheet destabilized."

The study, published this week in the journal Nature Geoscience, was carried out in a collaboration led by the University of Edinburgh with the British Antarctic Survey and the Universities of Aberdeen, Exeter and York, as well as The University of Texas at Austin.

"This is a significant discovery in a region of Antarctica that at present we know little about," said Professor Martin Siegert of the University of Edinburgh, who led the project. "The area is on the brink of change, but it is impossible to predict what the impact of this change might be without further work enabling better understanding of how the West Antarctic Ice Sheetbehaves."

The seaward edge of the newly discovered basin lies just inland of the ice sheet's grounding line, where streams of ice flowing toward the sea begin to float.

Two features of the basin, which is entirely below sea level, are particularly worrisome to scientists: First, like a cereal bowl, its edges slope down steeply. If the grounding line begins to retreat upstream, seawater will replace it and more ice will begin to float.

The study's authors predict that this positive feedback mechanism would sustain retreat of the ice sheet until eventually all of the ice filling the basin goes afloat. Second, the bed of the basin on which the ice rests is smooth. There are few big bumps, or "pinning points," to hold back sliding ice.

In a related paper published simultaneously in the journal Nature, computer models reveal that the Weddell Sea region may experience warmer ocean conditions at the end of the 21st century, which could provide the trigger for ice sheet change.