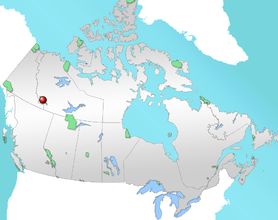 As I have posted in the past, all unknown natural phenomena are local in nature. Here we have the hard evidence of a creature that rips of the head of a victim. There are several incidences and I also know of one other assigned wrongly to a Bigfoot encounter. Whatever it is, it is a unique carnivore that for some reason chooses not to consume the victim as far as I can tell.

Presume it also has a wide range and operates alone like a bear. Since it is never seen, it may also not hibernate and must be dispersed. It is still a carnivore and a very shy one.

The fact that it has been eyeballed does at least give us an excellent candidate. Otherwise, I do not think any but the suicidal will be trekking in the upper Nahanni and locales. Do not presume this creature is restricted to the Nahanni. It appears to prefer severe cold country though.

The Valley of the Headless Men

Headless Valley is a specific region (Lat: 61.25 Long: -124.5) of the South Nahanni River valley (Canada) said to encompass a lost world complete with tropical forests, murderously savage natives, and a myriad of mysterious creatures ranging from 'Bear Dogs' to Sasquatch. The legend of Headless Valley is unusual in that it is fairly modern, having originated in 1908, following the discovery of two decapitated miners in the region of the South Nahanni River. Since that time, several other disappearances and murders have been documented in the region.


In the Nahanni National Park of Northwest Canada lies the Nahanni River. The area is only accessible by boat or plane and is home to many natural wonders, such as sinkholes, geysers and a waterfallalmost double the size of Niagara Falls. Lord Tweeds Muir (John Buchan), author of The 39 Steps once said of the valley: “It’s a fancy place that old-timers dream about. … Some said the “valley was full of gold and some said it was hot as hell owing to the warm springs. … It had a wicked name too, for at least a dozen folks went in and never came out’ … Indians said it was the homeof devils.”


The 200 Mile gorge has become infamous, due to a number of gruesome deaths and many disappearances, earning itself the eerie name, The Valley of the Headless Men. Anomalies first began in 1908, when the Macleod Brothers came prospecting for gold in the valley. Nothing was heard or seen of the brothers for a whole year, until their decapitated bodies were found near a river. Nine years later, the Swiss prospector Martin Jorgenson was next to succumb to the Valley, when his headless corpse was found. In 1945, a miner from Ontario was found in his sleeping bag with his head cut from his shoulders. While skeptics of an unknown power at work in the Valley would put the grizzly mutilations down to feuding gold prospectors or hostile Indians, there are other strange happenings in the area which add to the valleys mysteriousness. The fiercely renowned Naha tribe simply vanished from the area a few years prior to the first deaths. Other Indians of the area have avoided the Valley for centuries, claiming an unknown evil haunts it. Many parts of the valley remain unexplored, and there are tales the Valley holds an entrance to the Hollow Earth. Others believe the Valley is home to a lost world, with lush greenery and a tropical climate, due to the hot springs generating warm air, as well as untapped goldmines and wandering sasquatches. While a haven for Bigfoot remains unlikely, one thing is for certain, something strange lurks in the Nahanni Valley. 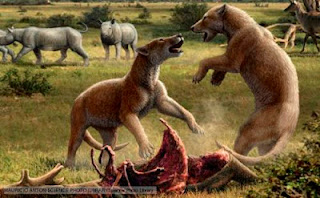 Bear-dogs were related to both the bear family and the dog family. They looked like hybrids between bears and dogs. There were once many different species in the family of bear-dogs, but then they began to die out. The most recent fossils we have from the New World date to about two million years ago, and in the old world the most recent are about ten thousand years old.


There is some evidence that the bear-dogs might have survived much longer than this in some remote areas. One species might even be alive today, if you can believe certain legends and sightings that have come from some remote, icy valleys on the border between Canada and Alaska. The waheela is the name of a gigantic wolf-like beast that has inhabited Indian legends from this area for a very long time. It is described as being like a wolf, but much larger and with a heavier build. It is attributed with supernatural powers, and it is said to be responsible for the many mysterious deaths that have occurred in Nahanni Valley, also known as "Headless Valley" because the people who died here mysteriously all had missing heads.

If the only thing we had to go on was these legends, we might be able to ignore the waheela, but there are also perfectly ordinary sightings made by ordinary Americans. A mechanic described this animal as looking like a wolf on steroids. He estimated its height at three and a half feet at the shoulder. The largest wolves ever recorded have been three feet, two inches tall at the shoulder, but giants of this size are truly rare. If the mechanic's estimate was correct, then this animal was at least four inches taller than the biggest wolf we know of. Other details differed from a true wolf. Its head was too broad for that of a wolf, and its build was too heavy, almost bear-like. It had pure white fur that was exceptionally long.

Other reports agree with the general description above, but add more detail. The waheela, despite the fact that it is larger than a wolf, has shorter legs than a wolf. The impressive shoulder height comes from its massive body instead of its legs. Its ears are smaller than a wolf's ears, and the tracks show toes set farther away from each other than in a wolf's tracks. The waheela are never found in packs, and they stay in the coldest, most inhospitable environments of the extreme north, favoring areas where there are few people.

The area where the waheela is sighted is one of the most remote places in the world. The fact that these lands are relatively unexplored means that there is a fair chance of discovering new kinds of animal there, perhaps including one that was supposed to have died out ten thousand years ago. On the other hand, this might just be another one of those legend-laden locales that doesn't pan out when it is fully investigated. Local tribes also report that the Nahanni Valley is infested with evil spirits, and certain other legends attribute the headless corpses to big hairymonsters resembling the sasquatch. With bipedal hairy humanoids and monstrous wolves being sighted in the same area and blamed for the same violent deaths, it might also be that we havewerewolf beliefs being thrown into the mix as well, to make things even more confusing. - Newton, Michael - Encyclopedia of Cryptozoology: A Global Guide to Hidden Animals and Their Pursuers 2005 / 'The Cryptid Zoo' newanimal.org