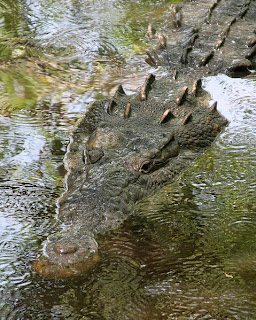 This answers a simple question. Why did the crocodile line remain fairly small? It turns out that they were much bigger previously.

The fossil record also shows that the creatures were also much more speciated. This begs the question of why the loss of diversity? Is this part of the die off of the Pleistocene Nonconformity?

I do not think we can blame humanity for any of this. Had we a successful hunting strategy, it is likely humanity would have driven all crocs to extinction.

A crocodile large enough to swallow humans once lived in East Africa, according to a University of Iowa researcher.

"It’s the largest known true crocodile,” says Christopher Brochu, associate professor of geoscience. “It may have exceeded 27 feet in length. By comparison, the largest recorded Nile crocodile was less than 21 feet, and most are much smaller.”

Brochu’s paper on the discovery of a new crocodile species was just published in the May 3 issue of the Journal of Vertebrate Paleontology. The new species lived between 2 and 4 million years ago in Kenya. It resembled its living cousin, the Nile crocodile, but was more massive.

He recognized the new species from fossils that he examined three years ago at the National Museum of Kenya in Nairobi. Some were found at sites known for important human fossil discoveries. “It lived alongside our ancestors, and it probably ate them,” Brochu says. He explains that although the fossils contain no evidence of human/reptile encounters, crocodiles generally eat whatever they can swallow, and humans of that time period would have stood no more than four feet tall.

"We don’t actually have fossil human remains with croc bites, but the crocs were bigger than today’s crocodiles, and we were smaller, so there probably wasn’t much biting involved,” Brochu says.

He adds that there likely would have been ample opportunity for humans to encounter crocs. That’s because early man, along with other animals, would have had to seek water at rivers and lakes where crocodiles lie in wait.

Regarding the name he gave to the new species, Brochu said there was never a doubt.

The crocodile Crocodylus thorbjarnarsoni is named after John Thorbjarnarson, famed crocodile expert and Brochu’s colleague who died of malaria while in the field several years ago.

“He was a giant in the field, so it only made sense to name a giant after him,” Brochu says. “I certainly miss him, and I needed to honor him in some way. I couldn’t not do it.”

Among the skills needed for one to discover a new species of crocodile is, apparently, a keen eye.

Not that the fossilized crocodile head is small—it took four men to lift it. But other experts had seen the fossil without realizing it was a new species. Brochu points out that the Nairobi collection is “beautiful” and contains many fossils that have been incompletely studied. “So many discoveries could yet be made,” he says.

In fact, this isn’t the first time Brochu has made a discovery involving fossils from eastern Africa. In 2010, he published a paper on his finding a man-eating horned crocodile from Tanzania named Crocodylus anthropophagus—a crocodile related to his most recent discovery.

Brochu says Crocodylus thorbjarnarsoni is not directly related to the present-day Nile crocodile. This suggests that the Nile crocodile is a fairly young species and not an ancient “living fossil,” as many people believe. “We really don’t know where the Nile crocodile came from,” Brochu says, “but it only appears after some of these prehistoric giants died out.”