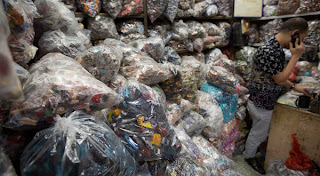 Sorry folks, this is what a recession looks like in China since the big guys are unable to go broke. Maybe they need to send everyone back to the farm for six months to provide a super boost there in human effort.

This means we face an economic pause here while demand has a chance to pick up and clean up inventories. In the mean time the US economy is staggering back onto its feet but remains slow going. The Euro zone remains trapped in a caccoon of poor investor confidence that is still far from been resolved. All these economies would respond extremely well to anything that assists in recapitalizing the base itself.

Perhaps this time instead of the usual stupidity, we could provide stimulus money by simply correcting the mortgage rules and matching down payment money for new house sales. If that were done universally, the capital formation would be rapid everywhere and demand would soar. The funds could be secured a claim paid out on resale at double original face value.

Bags of toys stored at a shop in a wholesale market in Guangzhou, a city in southeast China.

The glut of everything from steel and household appliances to cars and apartments is hampering China’s efforts to emerge from a sharp economic slowdown. It has also produced a series of price wars and has led manufacturers to redouble efforts to export what they cannot sell at home.

The severity of China’s inventory overhang has been carefully masked by the blocking or adjusting of economic data by the Chinese government — all part of an effort to prop up confidence in the economy among business managers and investors.
4
But the main nongovernment survey of manufacturers in China showed on Thursday that inventories of finished goods rose much faster in August than in any month since the survey began in April 2004. The previous record for rising inventories, according to the HSBC/Markit survey, had been set in June. May and July also showed increases.

“Across the manufacturing industries we look at, people were expecting more sales over the summer, and it just didn’t happen,” said Anne Stevenson-Yang, the research director for J Capital Research, an economic analysis firm in Hong Kong. With inventories extremely high and factories now cutting production, she added, “Things are kind of crawling to a halt.”

Problems in China give some economists nightmares in which, in the worst case, the United States and much of the world slip back into recession as the Chinese economy sputters, the European currency zone collapses and political gridlock paralyzes the United States.

China is the world’s second-largest economy and has been the largest engine of economic growth since the global financial crisis began in 2008. Economic weakness means that China is likely to buy fewer goods and services from abroad when the sovereign debt crisis in Europe is already hurting demand, raising the prospect of a global glut of goods and falling prices and weak production around the world.

Corporate hiring has slowed, and jobs are becoming less plentiful. Chinese exports, a mainstay of the economy for the last three decades, have almost stopped growing. Imports have also stalled, particularly for raw materials like iron ore for steel making, as industrialists have lost confidence that they will be able to sell if they keep factories running. Real estate prices have slid, although there have been hints that they might have bottomed out in July, and money has been leaving the country through legal and illegal channels.

Interviews with business owners and managers across a wide range of Chinese industries presented a picture of mounting stockpiles of unsold goods.

Business owners who manufacture or distribute products as varied as dehumidifiers, plastic tubing for ventilation systems, solar panels, bedsheets and steel beams for false ceilings said that sales had fallen over the last year and showed little sign of recovering.

“Sales are down 50 percent from last year, and inventory is piled high,” said To Liangjian, the owner of a wholesale company distributing picture frames and cups, as he paused while playing online poker in his deserted storefront here in southeastern China.

Wu Weiqing, the manager of a faucet and sink wholesaler, said that his sales dropped 30 percent in the last year and he has piled up extra merchandise. Yet the factory supplying him is still cranking out shiny kitchen fixtures at a fast pace.

“My supplier’s inventory is huge because he cannot cut production — he doesn’t want to miss out on sales when the demand comes back,” he said.

Part of the issue is that the Chinese government’s leaders have decided to put quality-of-life concerns ahead of maximizing economic growth when it comes to two of the country’s largest industries: housing and autos.

Premier Wen Jiabao has imposed a strict ban on purchases of second and subsequent homes, in the hope that discouraging real estate speculation will improve the affordability of homes. The ban has resulted in a steep decline in residential real estate prices, a sharp fall in housing construction and widespread job losses among construction workers.

At the same time, the municipal government in Guangzhou, one of China’s largest cities, has sharply reduced this summer the number of new car registrations it allows so as to reduce traffic congestion and air pollution.

Municipal officials from all over China have been flocking to Guangzhou to ask for details. Xi’an, the metropolis of northwestern China, has already announced this month that it will limit car registrations, although it has not settled on the details.

The Chinese auto industry has grown tenfold in the last decade to become the world’s largest, looking like a formidable challenger to Detroit. But now, the Chinese industry is starting to look more like Detroit in its dark days in the 1980s.

Inventories of unsold cars are soaring at dealerships across the nation, and the Chinese industry’s problems show every sign of growing worse, not better. So many auto factories have opened in China in the last two years that the industry is operating at only about 65 percent of capacity — far below the 80 percent usually needed for profitability.

“I worry that we’re going down the same road the U.S. went down, and it takes quite some time to fix that,” said Geoff Broderick, the general manager of Asian operations at J. D. Power & Associates, the global consulting firm.

Automakers in China have reported that the number of cars they sold at wholesale to dealers rose by nearly 600,000 units, or 9 percent, in the first half of this year compared to the same period last year.

Yet dealerships’ inventories of new cars rose 900,000 units, to 2.2 million, from the end of December to the end of June. While part of the increase is seasonal, auto analysts say that the data shows that retail sales are flat at best and most likely declining — a sharp reversal for an industry accustomed to double-digit annual growth.

“Inventory levels for us now are very, very high,” said Huang Yi, the chairman of Zhongsheng Group, China’s fifth-largest dealership chain. “If I hadn’t done special offers in the first half of this year, my inventory would be even higher.”

Manufacturers have largely refused to cut production, and are putting heavy pressure on dealers to accept delivery of cars under their franchise agreements even though many dealers are struggling to find places to park them or ways to finance their swelling inventories. This prompted the government-controlled China Automobile Dealers Association to issue a rare appeal to automakers earlier this month.

“We call on manufacturers to be highly concerned about dealer inventories, and to take timely and effective measures to actively digest inventory, especially taking into account the financial strain on distributors, as manufacturers have to provide the necessary financing support to help dealers ride out the storm,” the association said.

Officially, though, most of the inventory problems are a nonissue for the government.

The Public Security Bureau, for example, has halted the release of data about slumping car registrations. Data on the steel sector has been repeatedly revised this year after a new method showed a steeper downturn than the government had acknowledged. And while rows of empty apartment buildings line highways outside major cities all over China, the government has not released information about the number of empty apartments since 2008.

Yet businesspeople in a wide range of industries have little doubt that the Chinese economy is in trouble.

“Inventory used to flow in and out,” said Mr. Wu, the faucet and sink sales manager. “Now, it just sits there, and there’s more of it.”