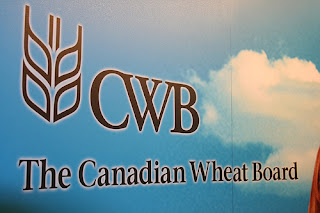 What is changing here is the historic mandatory nature of the wheat board as well it should.    Yet the whole concept was a successful solution that needs to be emulated.  What it is, is a grower’s cooperative that is owned by the growers in the long term interest of the growers.  Many of these things exist and usually with the general good will of the growers themselves.

It is a far better solution than a single processor dominating the supply chain and actually seen to be squeezing the growers as often appears to happen in periods of recession.

The problem arose only because the original formulators thought that participation needed to be mandatory when it never was necessary.

Sheer volume allowed the wheat board to negotiate large long term contracts that set prices and be the go to processor while also accessing government guarantees to supply low cost financing.

We have seen many grower cooperative arise over the years and the formula is clearly successful as it brings financial muscle few individual growers can muster.  The same service is often supplied by corporate processors but that attracts unwelcome resistance and often a move to the cooperative format.

A man who understands farming freedom

At long last, has a federal Agriculture Minister who understands why a government monopoly over prairie wheat and barley marketing is incompatible with democratic rights.

On Monday, the Canadian Wheat Board (CWB) released the results of a questionable plebiscite it held this summer among prairie grain growers - a plebiscite designed to show how much farmers still love the board - and the response of Gerry Ritz was spot on.

The Tory government has announced it will move this fall to repeal the CWB's monopoly over wheat and barley grown for human consumption in , , and northeastern B.C. This prompted the board (whose officials cannot imagine life without their monopoly power) to ask Western wheat and barley growers whether they wanted to retain the monopoly or move to a fully open market. Among wheat growers, 62% voted for the monopoly. Among barley growers, just 51% did.

This prompted wheat board chairman Allen Oberg to proclaim that the federal government is "out of touch with farmers." He declared his group's plebiscite is "the deepest expression of all of what farmers really want and the minister should listen."

To which Mr. Ritz replied: "No expensive survey can trump the individual right of farmers to market their own grain."

It is hard to recall any other federal politician so succinctly expressing the issue at the core of the debate over the board. This is a free country. If farmers do not want to want use the board to market the grain they grow on their own land, using seed, fertilizers and pesticides they paid for themselves, with equipment that belongs to them, then they shouldn't have to, no matter what their neighbours want. There is no moral or ethical justification can use to compel them to. The only authority to impose a grain monopoly is the brute force of law.

Gerry Ritz understands that. Allen Oberg clearly does not.

Wheat board supporters claim that those who want marketing choice are just being selfish. Yet, in truth, the selfish ones are those who would force their fellow producers to adhere to the monopoly against their will.

What's remarkable about the plebiscite's outcome is that only 62% of wheat farmers voted to retain the board's monopoly. A full 38% voted for an open grain market. (Among barley producers the split was 51/49.) Never before have we seen more than 15% support for open markets.

These numbers have little real meaning. A plurality of prairie wheat growers - about 45% according to surveys - actually favour dual marketing. They want the choice to market through the board or on their own. But the CWB doesn't want the hassle of operating in a dual-marketing environment, so it didn't offer producers that choice on the ballot, knowing full well that forcing a choice between one or the other will cause risk-averse farmers to vote for the system that they're familiar with, despite its flaws.

There were also questions about the legitimacy of the board's voters' list. Brian Otto, president of the Western Barley Growers Association (a pro market-choice organization) said he called over 1,100 producers on the list last fall and discovered "deceased producers, producers who had exited the industry, retired producers and so-called interested parties, who were receiving a ballot." Except for the deceased farmers, these groups tend to be pro-monopoly. Still, even with their inclusion, the board could get no more than 60% support.

Looked at that way, the plebiscite was surely a disappointment for the board, and in some regards a defeat. But whatever the result, the point remains that no matter how many farmers had voted for the monopoly, as Agriculture Minister Ritz said, there is no democratic authority that "can trump the individual right of farmers to market their own grain."
Posted by arclein at 12:01 AM