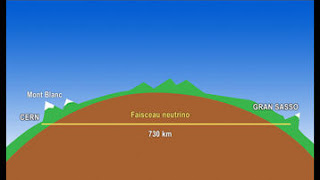 I am pleased with this result because it is confirmation of my own thoughts and theories based on the metric I introduced in my paper in the June 2010 edition of AIP’s Physics Essays.

Returning to Einstein’s famous equation E = mc2 we assert m is an invariant determined by local n for the neutrino.  However, the external metric imposed on this neutrino in a vacuum will differ directly from the external metric imposed passing through a denser universe presented by the crust of the Earth.  Since E is then measured at the detection end in a vacuum and during the journey m was effectively smaller in the ‘universe’ of the crust itself, the equation is balanced by a higher speed of light c.

As an aside, in an unpublished paper, I exactly describe the neutrino in geometric terms so as to allow my new metric to be applied.

This experimental work means that it should be possible to map the natural density of the inside of the Earth and the Sun using neutrinos if it can be made sensitive enough.

Einstein’s General Theory is not contravened as some have eagerly suggested.

The OPERA neutrino experiment at the underground Gran Sasso Laboratory has measured the velocity of neutrinos from the CERN CNGS beam over a baseline of about 730 km with much higher accuracy than previous studies conducted with accelerator neutrinos. The measurement is based on high statistics data taken by OPERA in the years 2009, 2010 and 2011. Dedicated upgrades of the CNGS timing system and of the OPERA detector, as well as a high precision geodesy campaign for the measurement of the neutrino baseline, allowed reaching comparable systematic and statistical accuracies.

The OPERA neutrino experiment [1] at the underground Gran Sasso Laboratory (LNGS)
was designed to perform the first detection of neutrino oscillations in direct appearance mode in the νμ→ντ channel, the signature being the identification of the τ− lepton created by its charged current (CC) interaction [2].

In addition to its main goal, the experiment is well suited to determine the neutrino velocity with high accuracy through the measurement of the time of flight and the distance between the source of the CNGS neutrino beam at CERN (CERN Neutrino beam to Gran Sasso) [3] and the OPERA detector at LNGS. For CNGS neutrino energies,

In this paper we report on the precision determination of the neutrino velocity, defined as
the ratio of the precisely measured distance from CERN to OPERA to the time of flight of
neutrinos travelling through the Earth’s crust. We used the high-statistics data taken by OPERA in the years 2009, 2010 and 2011. Dedicated upgrades of the timing systems for the time tagging of the CNGS beam at CERN and of the OPERA detector at LNGS resulted in a reduction of the systematic uncertainties down to the level of the statistical error. The measurement also relies on a high-accuracy geodesy campaign that allowed measuring the 730 km CNGS baseline with a precision of 20 cm.
Posted by arclein at 12:01 AM