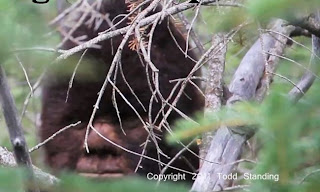 This appears to be an important Bigfoot report.  I posted two years ago that the only thing preventing us from having extensive documentary proof of the existence of the Sasquatch was professional trackers and plenty of modern technology to overcome the creature’s nocturnal nature and plenty of cash.  I thought then that we would get lucky quite soon.  This report sounds like we finally got lucky.

Even better we have more data.  The creatures actually operate in troops when left alone and free of human interaction.  This is extremely helpful and shows us that the park area will be a perfect place to gather uncontaminated information on the creature’s habits.

The guide has spotted three bands and obviously now knows how to spot spoor from other bands elsewhere.

As usual the press is been credulous.  However, it sounds like we are about to be treated to good quality photographs and paid for DNA work to support what has already been done.  The proof does not have to be any better than that because the DNA can now be studied for its genome.

This appears to be excellent news and once again proves my argument that all cryptid observations are terribly local and that alone slows recognition.  It just is not going to walk into the local laboratory for a checkup.

Video capture image of what a researcher claims is Bigfoot. He claims to have taken the video in the spring of 2011, three hours from his home in in the Banff/Kootenay area. Photo courtesy Todd Standing

If nothing else, the news is bound to make big strides with the tourism industry.

No longer will ’s best-known mountain park depend solely on breathtaking scenery and abundant wildlife to impress visitors and lure overseas tourists.

And no more envy towards other famous vacation spots like Loch Ness and , where legendary creatures are rumoured to lurk.

now has Bigfoot. Lots and lots of Bigfoots, in fact.

Yes, it’s an allegation that would have Ripley wondering whether to Believe it or Not, and P.T. Barnum reaching for his cheque book, but the mountains west of Calgary are a hotbed for the huge-footed primates.

That’s the assertion of a dedicated bigfoot research organization based near , which claims not only to have video and photo evidence of the mythical beast, but DNA proof as well.

“When I first started, I was a skeptic, but not anymore — now I’m a wholehearted believer in the species,” said Todd Standing, spokesman for the Sylvanic Bigfoot group.

Standing’s allegations of a Bigfoot colony living near the border of and Kootenay national park will raise many eyebrows, but his evidence has piqued the interest of the Discovery Channel.

This week, crews from “Finding Bigfoot,” a hit show on Discovery’s Animal Planet channel, are filming in the area, and Standing says the upcoming episode will be centred upon Sylvanic’s discoveries.

He says preliminary results from hair samples sent in for testing suggest an unknown species of primate, while video and photographs suggest a creature larger than a gorilla, with human-like features.

Of course, it’s that latter evidence that’s bound to have the skeptics taking sasquatch-sized swipes at Standing, particularly the photographs he says are proof of Bigfoot.

Paranormal footage, as a rule, is supposed to be grainy, badly-focused and jittery, as if the camera was assembled by Fisher-Price and mounted to the bumper of a gravel truck.

Not Sylvanic: Standing boasts a collection of sharp video clips and crisp photographs of Bigfoot, showing far, far more than the usual hirsute primate dashing behind the nearest bush.

Instead of blur, we get full-face portraits of the creature, peering from behind trees.

“I’ve had multiple interactions with them, and I’ve filmed them and photographed them on many occasions,” said Standing.

What the producers of Finding Bigfoot make of all this remains to be seen, as their quartet of sasquatchologists examines the evidence to see if it’s on solid footing.

The show has gone across investigating sightings of the creature, with the network “committed to looking for the Bigfoot until it’s found.”

Standing says he has — though he knows his belief in Bigfoot and the proof he produces from the backwoods opens him to mockery, derision and the suggestion he should sober up.

But he accepts the skeptism, because he originally joined the Sylvanic team with the intent of disproving the ancient story of an ape-like creature hiding in the wilderness of .

“I thought it was a combination of hoaxes and mistaken identities, and I wanted to prove it wasn’t true,” said Standing.

Now, he says Bigfoot is a fact — and with weeks, he hopes to have the DNA evidence to prove it.

“We hope to have results by October,” said Standing.

If that’s the case, tourism officials in will surely be thrilled. As it is, they welcome the attention of the popular television show, saying any link with Bigfoot is a bonus for visitors.

“Anything interesting that attracts people is a good thing — it seems like some harmless fun,” said Mary Morrison, spokeswoman for Louise Tourism.

“I mean, who wouldn’t want to see a Bigfoot?”

- A wilderness and ecology guide believes Bigfoots by the dozen could be roaming the wilderness of southern and parts of .

Todd Standing says he has photographic proof that such creatures exist after snapping a photo of something in the area with human-like features on its hairy face.

Speaking on an radio talk show Thursday, Standing says there may be three troops of these beasts in the area and the Kootenay region of .

He says each may consist of 10 to 15 members with the potential for 40 to 50 animals at the most.

Standing says scientists have DNA samples, but admits it will likely take a partial or fully intact body of one of these creatures before people believe they're real.

Standing's research is expected to be featured on an upcoming edition of the Discovery Channel Animal Show. (CHQR, CHED)