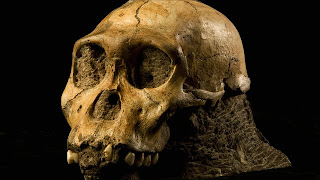 It is becoming clear that primate speciation or something like that produced huge diversity among primates world wide during the hundreds of thousands of years preceding the emergence of an effective sub class of tool makers that began to modify their environment.  It appears then that cross breeding subsumed a wide range of local characteristics into the emerging dominant modern human strain.

An emergent human tribe was itself a different matter.  It could easily out mass any stray hunting band it encountered and simply absorb the females into the tribe.  Thus it is rather plausible that all the local variations that arose world wide were largely subsumed into the more populous human stock and troublesome anomalies slowly weeded out.

A good example of that occurring is the low brow ridge sported by the Neanderthals that simply disappeared in the larger gene pool, although we can be sure it is hidden away in case it is ever important again.  This is also one more reason to recall that conscious choice by humanity will select fashionable features. Your idea of beauty does matter to your children.

The big error is the bias toward the apparent extinction of older genetic choices in the literature.  My argument is that females of child bearing age are conserved and especially so in an expanding population.  At worst they are slaves.  Thus genetic loss is unlikely but homogenization is not as the tribe enlarges.

Professor Chris Stringer, with the help of a cast of a fossil skull, describes the similarities that this species has with modern humans

The ancient remains of two human-like creatures found in could change the way we view our origins.

The 1.9-million-year-old fossils were first described in 2010, and given the species name Australopithecus sediba.

But the team behind the discovery has now come back with a deeper analysis.

It tells Science magazine that features seen in the brain, feet, hands and pelvis of A. sediba all suggest this species was on the direct evolutionary line to us - Homo sapiens.

"We have examined the critical areas of anatomy that have been used consistently for identifying the uniqueness of human beings," said Professor Lee Berger from the University of the Witwatersrand in

"Any one of these features could have evolved separately, but it is highly unlikely that all of them would have evolved together if A. sediba was not related to our lineage," the team leader informed BBC News. 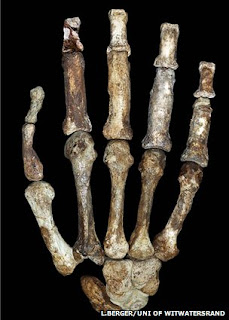 The female's right hand is missing only a few bones

It is a big claim and, if correct, would sideline other candidates in the fossil record for which similar assertions have been made in the past.

Theory holds that modern humans can trace a line back to a creature known as Homo erectuswhich lived more than a million years ago. This animal, according to many palaeoanthropologists, may in turn have had its origins in more primitive hominins, as they are known, such as Homo habilis or Homo rudolfensis.

The contention now made for A. sediba is that, although older than its "rivals", some of its anatomy and capabilities were more advanced than these younger forms. Put simply, it is a more credible ancestor for H. erectus, Berger's team claims.

The sediba specimens were unearthed at Malapa in the famous Cradle of Humankind World Heritage Site, just to the northwest of Jo'burg.

They were pulled from a pit - a depression left in the ground by a cave complex that had lost its roof through erosion over time.

Identified as an adult female and a juvenile male, the two individuals were quite possibly mother and son. What seems certain is that they died together in some tragic accident that saw them either fall into the cave complex or become stuck in it. After death, their bodies were washed into a pool and cemented in time along with the remains of many other animals that got trapped in the same way.

In the months since their 2010 announcement, Professor Berger and colleagues have subjected the remains to further detailed assessment.

Age: The latest dating technologies were applied to the sediments encasing the fossils. Whereas original estimates had put the age of the remains at somewhere between 1.78 and 1.95 million years old, the new analysis has narrowed this window of uncertainty to just 3,000 years. The new age is now between 1.977 and 1.98 million years old. The refined dating is important, says the team, because it puts A. sediba deep enough in time to be a realistic ancestor to H. erectus.

Dr Robyn Pickering, from the University of Melbourne, Australia, who led the dating, told BBC News: "This is a very interesting time in human evolution because it is when we think we should be seeing the beginnings of our genus,Homo. Previously, we've had very few fossils from this time period, so thesediba fossils are remarkable in that they are so complete."

Brain: A high-resolution X-ray scan of the male specimen's skull has produced a virtual cast of its braincase. This was carried out at the European Synchrotron Radiation Facility in . From this, the researchers estimate an adult A. sediba's brain to have been about 440 cubic centimetres in volume, or about the size of a medium grapefruit. This is smaller than much older fossils in the record such as the famous "Lucy" specimen, Australopithecus afarensis (3.2 million years), but, intriguingly, the shape is more human-like, especially at the front. This may hint at the start of the re-organisation of the brain that would be necessary to make us what we are today. 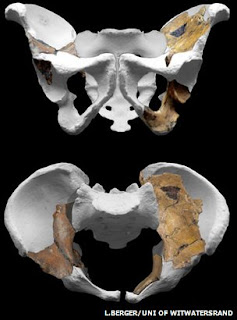 Pelvis: The pelvis is short and broad like a human pelvis. A more ancient creature like Lucy has a flatter and more flaring pelvis. A popular idea has been that the modern human pelvis evolved in tandem with the gradual growth in brain volume - facilitating the birth of babies with bigger heads. A. sediba gives the lie to this theory, says the team, because it had a modern-looking pelvis while possessing a small brain.

Hand: The right-hand of the female is very nearly complete. It is looks far more like a modern human hand than an ape hand. Its fingers are shorter relative to the thumb than in a chimpanzee. And yet, it appears to have possessed powerful muscles for grasping, suggesting A. sediba spent a lot of time clambering through the branches of trees. The team also argues that the dexterity would have been there to make simple tools.

Foot: The ankle joint is mostly human-like in form and there is some evidence for a human-like arch and Achilles tendon. But A. sedibapossessed an ape-like heel and lower tibia, or shin bone. The scientists think this combination may have led to a distinctive type of walk when the creature was not climbing in trees.

Whatever the correctness of the analysis, the creature certainly has a fascinating mix of features - some archaic, some modern.

Independent scientists describe the fossils as exquisite and utterly fascinating.

Dr William Harcourt-Smith from the American Museum of Natural History in New York, commented: "One lineage of Australopithecusalmost certainly led into the first member of our own genus called Homo, and from then eventually emerged modern humans.

"But some of them are side branches, and we're trying to work out which ones are and which ones aren't - and that's why this finding is so important. In many ways, these fossils are the 'smoking gun' just before the emergence of our own genus."

And Professor Chris Stringer, from 's , told BBC News: "This isn't the end of the story. What may be happening is that there were several australopithecine forms all evolving human-like features in parallel as they turned to meat-eating and tool-making and moving greater distances.

"The question now is to pull out of this mess which one is really the ancestor of the genus Homo. We know there are more remains to come from this incredible site. Let's see if other individuals also show this mix of features."