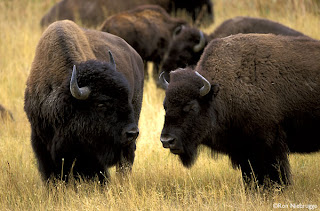 Got the video of Grist.  It is good to see working ranches adopt practices that emulate the original wild conditions.   We are a long way from significant restoration but seeing this informs us that it is happening and that attitudes support it fully.  The Buffalo Commons will be restored one rancher at a time and it is the only way possible.

Importantly, buffalo herds are expanding and also improving as modern husbandry takes hold out there.

We presently have a herd population in excess of 500,000 animals and it is reasonable that present slow expansion is allowing a steady improvement in general animal quality.  Of course, the next census may show a sharp increase since there has been bursts of positive press noticed.

I would like to see the herds quickly expand to a size large enough to make the meat readily available.  Yet herd improvement may simply be necessary first.  This is not like the fish farming industry which has exploded in a couple of decades.  Yet doubling every five years is reasonable which means that it becomes possible to have a herd of five million animals in 2030 and fifty million animals in 2050 or in numbers approaching historical levels.

A policy supporting this could be well placed though the economic arguments may simply not yet compelling enough though the buffalo certainly has the edge in the long term.  We really do have to accept that we also need to enhance edibility.  We are all spoiled after all by our tender beef.  Does anyone still know how to handle tough old cow?

It was never in the cards to revert to original conditions outright.  It is going to take a steady evolution and rebuild with the full contribution of landholders.  At least someone cares for every acre that matters.

Almost halfway through our six-month, food-focused journey across America, we found a place we didn't want to leave: the stunning J Bar L Ranch, situated on 30,000 acres in southwest Montana in one of the most important wildlife corridors in the country. Gently shepherding cattle across the landscape, ranch manager Bryan Ulring, a former hunting and fishing guide, tries to replicate the bison's role in shaping this habitat. The result is an area packed with wildlife, fertile soil, and plenty of healthy and delicious meat. Best of all, the folks who run this place became our friends.

The Perennial Plate Episode 70: The Cows and The Horses from Daniel Klein on Vimeo.

The Perennial Plate Episode 70: The Cows and The Horses from Daniel Klein on Vimeo.

Daniel Klein is a chef, activist, and filmmaker living in . He's cooked in the restaurants of Thomas Keller, Fergus Henderson, and Tom Colicchio and has directed, filmed, edited and produced projects on various issues including oil politics and the development industry in Africa (What are we doing here? which has aired on TV, in theaters, and at festivals worldwide). Since March, Daniel has been documenting his culinary, agricultural and hunting adventures on film in a series called The Perennial Plate, featuring long winters, urban gardens, ice fishing, slaughterhouses, foraging for wild edibles, and more. Follow him on twitter @perennialplate.

BUFFALO COMMONS—Frank (left) and Deborah Popper, the East Coast geographers who in 1987 posited the theory of the Buffalo Comments, discuss how well their theory is holding up during the recent Kansas Farmers Union convention held at Salina. The Poppers admit their initial analysis that federal intervention should be used to return the Plains to the buffalo isn't needed because the area is evolving toward depopulation on its own.

The geographers who posed the concept of the Buffalo Commons over 20 years ago returned to the recently to speak to a group they called "the last bastions of romantic capitalists."

The group was the annual convention of the Farmers Union held at . About 50 people attended the speeches by geography professors Frank and Deborah Popper.

The couple teaches at Rutgers and , respectively.

"Romantic capitalism has a long history on the Great Plains," Frank Popper said. "It's a lot of how and why the land was settled by whites in the first place, not long after the Civil War via the Homestead Act.

"This romanticism has been proven out through the Dust Bowls of the 1890s and 1930s and through the period of time around 1987 when Deborah and I first published our piece on the ."

The Poppers settled on one thing that most of their critics had leveled upon them in their early research. That is, that the federal government would create a large project to steer people out of the Plains and replace them with bison.

"The only thing we got wrong was that it was going to be primarily a federal project," Frank Popper said. "We were wrong, but we saw the Buffalo Commons as a sort of environmental end state to which the Plains were moving and that it would be a place where traditional agriculture would become more environmental, where ecotourism would become more important, and where the land would be treated more lightly, more gingerly than in the past. Settlement on the Plains would exist in an altered form. The word sustainable has been overused but it applies."

It's been a generation since the Poppers became infamous for their work. Dozens of articles, as well as books and documentary films were made about the couple and their theory.

"It was mainly a piece so Deborah and I could work together," Frank Popper said. "Deborah was a graduate student at the time. We had been writing on the and the West before, but we wanted to do something together.

"We never really expected it to have the impact it did and does. We would have recoiled then that we would still be talking about it 23 years later. It's clear that in the intervening years a quiet muscle of reality, a lot of the trends we saw in the depopulation of the Plains has continued."

Those trends have been born out in two censuses since the Poppers' initial research was published, the couple contends.

"Young people leave and the people who stay are getting older. The Plains has for a long time had one of the highest median ages of any place in the country," Frank Popper said. "More positively, though, the Buffalo Commons has begun in clear ways to materialize."

For one thing, he mentioned that buffalo production has increased. Banks are financing buffalo producers in increasing numbers and many Indian tribes use the Buffalo Commons as a central part of their land use planning.

For another, the couple offers the increase in development of land easements.

"You are seeing land purchases from The Nature Conservancy, (non-governmental organizations) like American Curry Foundation, the Grassland Foundation, and the Great Plains Restoration Council all are pursuing Buffalo Commons style buyouts," he said.

The biggest buyout, Popper believes, could come in , where former Gov. Mike Hayden endorsed the Buffalo Commons theory in a 1994 speech when he previously denounced it.

"It was one of the most startling reversals I've ever seen from a working politician. The may actually happen," he said. "I never would have thought that has emerged as a leader in interest."

That's because of what Frank Popper observes from the writings of historian Frederick Jackson Turner, who in the 1890s, declared the American frontier was closed.

"That declaration was adopted by most Americans, and it complicated history in several ways. If you used Turner's measures, there is more land in that qualifies now as frontier than there was in 1890. This is land that had less than six people per square mile," Frank Popper said.

"Turner thought that American agriculture would keep the population expanding. More people, more railroads, more livestock, more cities would be created and incomes would go up. It didn't happen. What's happened throughout the Great Plains, particularly , is that instead of continued growth the numbers have fallen off."

For her part, Deborah Popper said a new social order is needed to keep the Plains sustainable.

"The current scale of grasslands agriculture is mammoth. That conquest of natural systems must instead become the target of American innovation," she said. "It must find room for small, mid-sized and low input farms as well as find room for efforts that make their economic system work with a very different set of social goals."

She said that higher crop production yields, particularly for corn--which she calls an industrial product rather than a food--have not protected "grassland communities."

"Economic efficiency fit its time and place. Today's situation is different," she said. "Children of the rural poor who grow up amid this country's amber waves of grain are the least likely to have a proper diet. Main Streets have nothing there. What we are talking about is the creation of rural ghettos."

She complained about the large investment producers make in land and equipment in order to be fruitful.

This has placed long-term impacts on rural communities, she said.

"These efficiencies made rural populations drop. As a result, the farm town has to get more out of every person left, whether for volunteer fire departments, schools, churches or charities--and you all know this."

The challenge, she said, is to turn the theory into a management principle within a larger social system.

"The Buffalo Commons represents a different way of thinking, one where growth doesn't have to occur every year or decade, where you have growth until the bubble bursts, but one that tries to get away from the bubble," Frank Popper said.

He also stood up to the theory's critics.

"I've been accused of having a slightly un-American approach to the land and the environment, where growth is not always the be-all and end-all, where growth can go too far, and the Buffalo Commons implies a quietism or defeatism," Frank Popper said.

"Instead, the Buffalo Commons implies too much growth can be a mistake, overburdening the land, overmastering the environment and in the end always getting kicked in the rear or the pocketbook--or someplace else.

"I realize there is a social comedy in two people from back east who are telling people in the Plains what to do with their land. I've enjoyed it, but there are important things to look at in how we treat this vast, characteristically American chunk of land. There are lessons here on how to live on the land that can be applied to the Corn Belt, the lower delta, and parts of our largest cities--like --that are depopulating like the Plains. It's about sustainability. It's about being American."