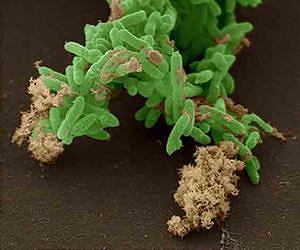 This is a nice piece of work and it clearly points to a practical protocol for cleansing any heavy metal contaminated site. In fact it may even explain the unusual nature of uranium deposition in the geological environment.  The high grade deposits were always interpreted in terms of electrochemical deposition even when little else precipitated.  A handy and selective microbe could nicely fix all that.

Whether this has a practical application remains to be seen but with serious soil problems needing remediation it certainly is promising.

Perhaps we will now be able to inexpensively tackle such clean up problems.

Researchers at have unraveled the mystery of how microbes generate electricity while cleaning up nuclear waste and other toxic metals.

Details of the process, which can be improved and patented, are published in the current issue of the Proceedings of the of Sciences. The implications could eventually benefit sites forever changed by nuclear contamination, said Gemma Reguera, MSU microbiologist.

"Geobacter bacteria are tiny micro-organisms that can play a major role in cleaning up polluted sites around the world," said Reguera, who is an MSU AgBioResearch scientist.

"Uranium contamination can be produced at any step in the production of nuclear fuel, and this process safely prevents its mobility and the hazard for exposure."

The ability of Geobacter to immobilize uranium has been well documented. However, identifying the Geobacters' conductive pili or nanowires as doing the yeoman's share of the work is a new revelation. Nanowires, hair-like appendages found on the outside of Geobacters, are the managers of electrical activity during a cleanup.

"Our findings clearly identify nanowires as being the primary catalyst for uranium reduction," Reguera said. "They are essentially performing nature's version of electroplating with uranium, effectively immobilizing the radioactive material and preventing it from leaching into groundwater."

The nanowires also shield Geobacter and allow the bacteria to thrive in a toxic environment, she added.

Their effectiveness was proven during a cleanup in a uranium mill tailings site in Rifle, Researchers injected acetate into contaminated groundwater. Since this is Geobacters' preferred food, it stimulated the growth of the Geobacter community already in the soil, which in turn, worked to remove the uranium, Reguera said.

Reguera and her team of researchers were able to genetically engineer a Geobacter strain with enhanced nanowire production. The modified version improved the efficiency of the bacteria's ability to immobilize uranium proportionally to the number of nanowires while subsequently improving its viability as a catalytic cell.

Reguera has filed patents to build on her research, which could lead to the development of microbial fuel cells capable of generating electricity while cleaning up after environmental disasters.

The research team included Dena Cologgi and Allison Speers, MSU graduate students, and Sanela Lampa-Pastirk and Shelly Kelly, post-doctoral researchers. The National of and the Department of Energy funded the study.