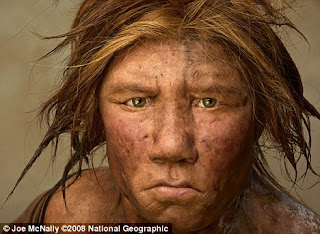 I think an excellent comparable here is the rare but occasional interbreeding that takes place between brown bears and polar bears.  It is just often enough for us to confirm the reality but not often enough to produce special populations and perhaps new species while we are at it.

Assuming that scenario, the once every twenty or so years is essentially spot on.

However, I also think as human populations expanded, that the human tribes simply outright overran the small hunting bands subsuming the females while eliminating the males.  What we need to understand is what effect such activity would have on genetic flow.

We are actually watching this happen in our own world in which remnant sub populations are inexorably been absorbed into the presently vast global population.  Just how much genetic contribution will any single aboriginal population make?  What is certain is that ethnic purity is dissolving away generation after generation for these small populations as it did for many others before them.

Knowing that would allow us to judge the Neanderthal contribution better.  Today we have only recently discovered that it was not zero.

How often did humans and Neanderthals have carnal relations? Not very

By John Timmer | Published about 8 hours ago

With the latest data pretty clearly showing that our ancestors had carnal relations with some of the archaic humans they met in , a couple of secondary questions have come up. A paper in this week's PNASattempts to answer at least two of them: how often did this interbreeding happen, and are we all carrying the same bits of Neanderthal DNA. The answers the authors arrive at are "not often" and "no."

We know currently that Europeans and Asians have about two percent of their genomic DNA that originated with Neanderthals and entered the modern human lineage in a process called introgression. But this could have come about several ways. For example, those regions could be the product of a single mating that was then selected for because they improved fitness. Alternately, matings could have been more frequent, and the two percent of the DNA that remains is just what stuck around by chance.

To answer that question, the authors built a population/migration model, in which they traced a modern human population that was growing and spreading against a background occupied by Neanderthals. They could vary the degree of interbreeding, then estimate how much DNA would remain in a modern population. The model suggests that as few as 200 interbreeding events could leave us with about one percent Neanderthal DNA; three percent would only require about 430 matings. If you assume that the two groups overlapped for about 10,000 years, that works out to once every 25-50 years. So, it seems that interbreedings were rare, which the authors ascribe to either social stigma or (more probably) a reduced fitness or fertility in the offspring of these matings.

Their model also indicates that, with an expanding human population, these isolated events would occur near the edge of the expansion, and the resulting population would spread out in such a way that future generations would end up isolated from each other. This suggests that different bits of Neanderthal DNA would probably end up in different regional populations unless they were selected for through evolution. We don't know whether this is the case just yet, but the availability of Neanderthal, European, and Asian genomes should give us a way to test the accuracy of this prediction.