Robot Tractors on the Way 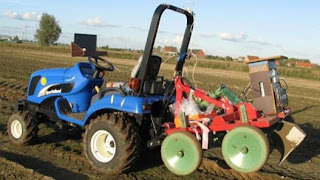 It sounds good, but the real problem will always be working through ground that is not homogenous to begin with which describes most ground unless one operates in a delta were one is spoiled.

As one who had the privilege of working fields quite able to produce boulders large enough to be caught by a plow and couch grass clumps able to bunch up in the blades if one actually took one’s eye of the plow, it seems a bit unlikely.  Of course we no longer do deep plowing too often, but even rakes grab huge amounts of sod and the like.

My point of course is there is a reason why you often see an operator driving with his eyes firmly fixed behind him and his right hand on the hydraulic to let him jump over the bad spots without been stopped.

Beyond all that this will be a great boost were we do have clean fields to begin with.  Smaller equipment could even be used as a matter of course because the labor element disappears.  Somehow setting a tractor to run 24/7 just may work on thousand acre fields.

We are a lot closer to the vision of science fiction in which the fields are operated by robots in general.

Many of us are eagerly awaiting the widespread adoption of autonomous cars to free us from the hassle of driving to and from work. This kind of technology also has applications beyond the roadway, especially in areas like farming where driving isthe work ... and it's not on paved surfaces with markings and signs laid out. Dealing with the uneven and inconsistent terrain of a field poses unique problems that a team from Katholieke Universiteit Leuven (KU Leuven) and Flanders' Mechatronics Technology Centre (FMTC) in are claiming to have overcome with their robotic self-steering tractor.

Although it might look pretty simple to the untrained eye, keeping a tractor on track over inconsistent terrain can take a bit of skill explains Erik Hostens, project engineer for FMTC.

"Only experienced tractor operators have the skills needed to work a field with precision. The job of an operator is really quite complex: he observes the tractor's current position, makes a judgment based on terrain conditions and the route to be followed, and, based on all this, decides the speed and orientation of the tractor."

To develop their tractor navigation system the team started by installing a linear propulsion system to press the tractor's accelerator and steer. They then added a computer and various positional sensors, including a GPS system. Because traditional navigation systems aren't good at dealing with multi-terrain conditions, different settings must be calibrated for each terrain type to enable the tractor to drive on both hard and wet terrain.

The steering system the team developed analyzes the terrain conditions and estimates the expected wheel slippage. Taking into account the current terrain type and the model of the tractor, the system calculates the optimal speed and turning radius in real-time.

"This 'smart steering' allows for precision down to the centimeter," says Gregory Pinte, of FMTC. 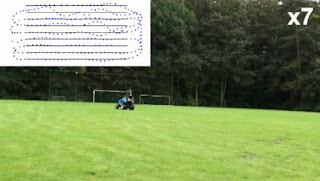 It's currently not as easy on the eye as the RoboTrac autonomous tractor concept we looked at in 2008 and in a demonstration, the self-steering tractor prototype initially veers pretty wildly off the pre-set course. But after a couple of rows it quickly finds its bearings and is able to follow the course with a high degree of precision.

"By putting automated agricultural machines in the fields, ever-increasing operator costs can be significantly reduced. On top of that, thanks to the 'smart steering' capability of the robot, changes in terrain type have become superfluous," says Vincent Theunynck, of New .

The researchers from FMTC and KU Leuven are set to unveil their first prototype self-steering tractor at the 30th Annual International Agriculture and Horticulture Days of Mechanisation in Oudenaarde, Belgium on the 24th and 25th of September.
Posted by arclein at 12:01 AM

I was shocked when I read this part: "Somehow setting a tractor to run 24/7 just may work on thousand acre fields". Did you really set the tractor to run for 24/7? If so, then I admire your persistence. Why Arclein? What was the problem, anyway? I suggest you repair it if there's any damage or something is wrong with your tractor. Driving it on the fields can be quite dangerous, you know.