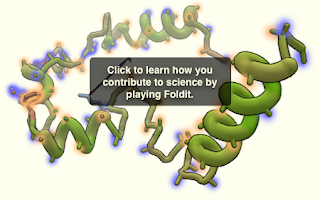 This is an extraordinary new method.  We can take complex molecules and use a game interface to optimize the application of intuition to profoundly difficult problem of constructing a model.  Obviously this can possibly be applied elsewhere, but chemistry will certainly provide all the action anyone needs.

Anyone tasked with solving problems as I have been all my life knows how critical it is to tap intuitive processes.  We call it mathematical insight and we use it to bail ourselves out of trouble when logic lets us down or feeds us into a dead end.

It is even more wonderful that they actually admitted that this is what they did.  When in doubt apply one’s magic wand.

The exploit is published on Sunday in the journal Nature Structural & Molecular Biology, where -- exceptionally in scientific publishing -- both gamers and researchers are honoured as co-authors.

Their target was a monomeric protease enzyme, a cutting agent in the complex molecular tailoring of retroviruses, a family that includes HIV.

Figuring out the structure of proteins is vital for understanding the causes of many diseases and developing drugs to block them.

But a microscope gives only a flat image of what to the outsider looks like a plate of one-dimensional scrunched-up spaghetti. Pharmacologists, though, need a 3-D picture that "unfolds" the molecule and rotates it in order to reveal potential targets for drugs.

This is where Foldit comes in.

Developed in 2008 by the , it is a fun-for-purpose video game in which gamers, divided into competing groups, compete to unfold chains of amino acids -- the building blocks of proteins -- using a set of online tools.

To the astonishment of the scientists, the gamers produced an accurate model of the enzyme in just three weeks.

Cracking the enzyme "provides new insights for the design of antiretroviral drugs," says the study, referring to the lifeline medication against the human immunodeficiency virus (HIV).

It is believed to be the first time that gamers have resolved a long-standing scientific problem.

"We wanted to see if human intuition could succeed where automated methods had failed," Firas Khatib of the university's biochemistry lab said in a press release.

"The ingenuity of game players is a formidable force that, if properly directed, can be used to solve a wide range of scientific problems."

One of Foldit's creators, Seth Cooper, explained why gamers had succeeded where computers had failed.

"People have spatial reasoning skills, something computers are not yet good at," he said.
"Games provide a framework for bringing together the strengths of computers and humans. The results in this week's paper show that gaming, science and computation can be combined to make advances that were not possible before."