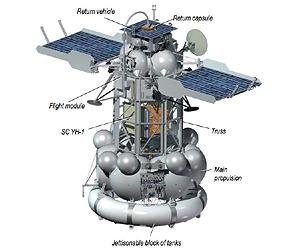 As we posted recently, I consider it completely plausible that Phobos is a hollowed out asteroid used to protect a Space habitat 16 km in diameter and having an approximate volume of 211 cubic meters.  This makes it large enough to easily accommodate millions working in space.

Since it was the Russians in 1958 who first espoused the possibility of such a character, it is hardly surprising and certainly fitting that they should make the first effort to investigate Phobos.  I hope they have excellent maneuverability because the main crater needs to be looked at spot on and also illuminated.  As well the massive monolith needs a close up look see.

Perhaps we are about to see excitement restored to the space exploration business.

The technology presently has advanced hugely and it has now come within our ability and financial resources to flood the near solar system with huge numbers of remote viewing platforms.  Confirmation of the artificial nature would fuel such a drive as every scrap out there will need to be looked at.

Russia would resume its program of inter-planetary explorations after a long break with an unmanned mission to the Martian satellite Phobos, a Russian space company said Thursday.

According to Victor Khartov, head of the Lavochkin Scientific and Production Company, the launch of the Phobos-Grunt vehicle was scheduled for November.

"Our country is about to return to planets and stars. We must learn how to fly to deep space, to Mars, after a 20-year break," Khartov told the Interfax news agency.

He admitted the Phobos mission would be "very risky", but said "the first step must be made".

Russia had spent about 5 billion rubles (161 million U.S. dollars) preparaing for the three-year mission, which would include drilling Phobos' surface and returning 200 grams of soil back to Earth in 2014, he said.

The mission would also collect bacteria samples for two Russian and one biological experiments.

According to the director of the Russian Space Explorations Institute Lev Zeleny, scientists want to find out if the bacteria can survive a long space trip.

The vehicle itself would be disinfected before the launch to prevent micro-organisms being inadvertently transferred between Earth and Phobos.