GRAIL and the Missing Moon 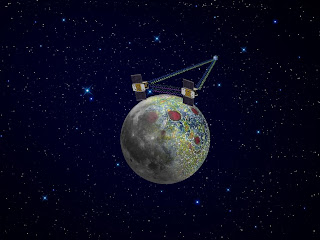 The moon is remarkable for two asymmetries that are surely linked in some manner.  The obvious one is that it has a front and back because it is locked into showing the same face to Earth.  The second is that the geological history is so different.

Here we attempt to explain it away as fairly slow merging of two planetoids.

A more convincing explanation would be for the molten moon while still spinning to have its lighter crustal material to concentrate as a large continent while stripping the remaining surface leave a smooth lava ocean.  Once cooled sufficiently, all locked down and after that the moon eventually settled into its present configuration with the smooth side facing Earth.  The combined tidal effects of Earth and Sun would drive the whole process.

The GRAIL mission will provide us with ample data and superior resolution of the structure of the moon and will be welcome.

GRAIL and the Mystery of the Missing Moon

Sept. 7, 2011: As early as Sept. 8th, NASA's GRAIL mission will blast off to uncover some of the mysteries beneath the surface of the Moon. That cratered gray exterior hides some tantalizing things – even, perhaps, a long-lost companion. 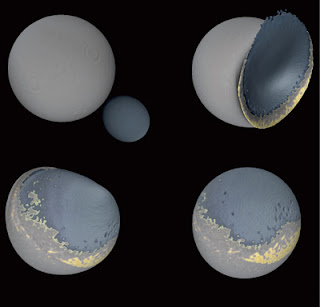 The "Big Splat." Four snapshots from a computer simulation of a collision between the Moon and a smaller companion show how the splattered companion moon forms a mountainous region on one side of the Moon. Credit: M. Jutzi and E. Asphaug, Nature.

If a paper published recently in the journal Nature* is right, two moons once graced our night skies. The proposition has not been proven, but has drawn widespread attention.

"It's an intriguing idea," says David Smith, GRAIL deputy principal investigator at the . "And it would be a way to explain one of the great perplexities of the Earth-Moon system – the Moon's strangely asymmetrical nature. Its near and far sides are substantially different."

The Moon's near side, facing us, is dominated by vast smooth 'seas' of ancient hardened lava. In contrast, the far side is marked by mountainous highlands. Researchers have long struggled to account for the differences, and the "two moon" theory introduced by Martin Jutzi and Erik Asphaug of the of at is the latest attempt.

Scientists agree that when a Mars-sized object crashed into our planet about 4 billion years ago, the resulting debris cloud coalesced to form the Moon. Jutzi and Asphaug posit that the debris cloud actually formed two moons. A second, smaller chunk of debris landed in just the right orbit to lead or follow the bigger Moon around Earth.

"Normally, such moons accrete into a single body shortly after formation," explains Smith. "But the new theory proposes that the second moon ended up at one of the Lagrange points in the Earth-Moon system."

Lagrange points are a bit like gravitational fly traps. They can hold an object for a long time--but not necessarily forever. The second moon eventually worked its way out and collided with its bigger sister. The collision occurred at such a low velocity that the impact did not form a crater. Instead, the smaller moon 'went splat,' forming the contemporary far side highlands.

In short, the lunar highlands are the lost moon's remains.

Flying in formation around the Moon, NASA's twin GRAIL spacecraft will make precise measurements of the lunar gravitational field.

"By probing the Moon's gravity field, GRAIL will 'see' inside the Moon, illuminating the differences between the near and far sides."

GRAIL will fly twin spacecraft around the Moon for several months. All the while, a microwave ranging system will precisely measure the distance between the two spacecraft. By watching that distance expand and contract as the pair fly over the lunar surface, researchers can map the Moon's underlying gravity field.**

"These measurements will tell us a lot about the distribution of material inside the Moon, and give us pretty definitive information about the differences in the two sides of the Moon's crust and mantle. If the density of crustal material on the lunar far side differs from that on the near side in a particular way, the finding will lend support to the 'two moon' theory."

But this information is just one "piece of the jigsaw puzzle." To prove a sister ever existed, other pieces are needed. NASA's Lunar Reconnaissance Orbiter has already provided key information on the Moon's surface topography. Scientists can also refer to lunar surface chemistry data and look at old seismic information from Apollo for clues.

But what's really needed, says Smith, is a sample return mission to the far side to determine the ages of rocks there.
"The smaller moon, if there was one, was about 1/3 the size of our current Moon. So upon collision it would have cooled down faster, and the rocks on the far side, where its remains are thought to have spread, would be older than the ones on the near side."

In any case, we have something new to think about. Shall we try singing "fly me to the moons" or "shine on harvest moons"?

** By very precisely measuring the tiny gravitational perturbations of the two satellites at various locations, and then putting all those measurements together for the whole Moon, you get a gravity map. In making all their calculations, the GRAIL team will have to correct for factors such as gravitational pull of the Sun, Earth, and other planets, and general relativity, just to name a few.

Credits: NASA's Jet Propulsion Laboratory, , manages the GRAIL mission. The Massachusetts Institute of Technology, , is home to the mission's principal investigator, Maria Zuber. The GRAIL mission is part of the Discovery Program managed at NASA's in , Lockheed Martin Space Systems, , built the spacecraft. Launch management for the mission is the responsibility of NASA's Launch Services Program at the in . JPL is a division of the California Institute of Technology in .

Interviewee David Smith is also from the Massachusetts Institute of Technology.