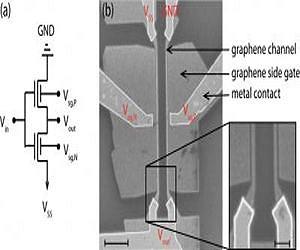 Slowly but surely graphene is been harnessed for producing transistors.  This work is a long ways down the road and we will see this in use rather quickly.

So far we have been mastering what we could already do with other materials.  What I find most interesting with graphene is the clear promise to engineer completely new solutions not otherwise possible.  That will soon be a big part of this developing story.

The revolution in materials science and electronics brought on by graphene has barely begun.

Researchers are making progress in creating digital transistors using a material called graphene, potentially sidestepping an obstacle thought to dramatically limit the material's use in computers and consumer electronics. This composite image shows the circuit schematics of a new type of graphene inverter, a critical building block of digital transistors, left, and scanning electron microscope images of the fabricated device. Credit: Hong-Yan Chen,

Researchers are making progress in creating digital transistors using a material called graphene, potentially sidestepping an obstacle thought to dramatically limit the material's use in computers and consumer electronics.

Graphene is a one-atom-thick layer of carbon that conductselectricity with little resistance or heat generation. After its discovery in 2004 - which earned a Nobel Prize in physics - it was touted as a potential replacement for silicon, possibly leading to ultrafast devices with simplified circuits that might be less expensive to manufacture.

However, graphene's luster has dulled in recent years for digital applications as researchers have discovered that it has no "band gap," a trait that is needed to switch on and off, which is critical for digital transistors.

"The fact that graphene is a zero-band-gap material by nature has raised many questions in terms of its usefulness for digital applications," said Purdue doctoral student Hong-Yan Chen.

Electrons in semiconductors like silicon exist at two energy levels, known as the valence and conduction bands. The energy gap between these two levels is called the band gap. Having the proper band gap enables transistors to turn on and off, which allows digital circuits to store information in binary code consisting of sequences of ones and zeroes.

Chen has led a team of researchers in creating a new type of graphene inverter, a critical building block of digital transistors. Other researchers have created graphene inverters, but they had to be operated at 77 degrees Kelvin, which is minus 196 Celsius (minus 320 Fahrenheit).

"If graphene could be used in digital applications, that would be really important," said Chen, who is working with Joerg Appenzeller, a professor of electrical and computer engineering and scientific director ofnanoelectronics at Purdue's .

The Purdue researchers are the first to create graphene inverters that work at room temperature and have a gain larger than one, a basic requirement for digital electronics that enables transistors to amplify signals and control its switching from 0 to 1.

Findings were detailed in a paper, "Complementary-Type Graphene Inverters Operating at Room-Temperature," presented in June during the 2011 Device Research Conference in

To create electronic devices, silicon is impregnated with impurities to change its semiconducting properties. Such "doping" is not easily applicable to graphene. However, the researchers have potentially solved this problem by developing "electrostatic doping," which makes it possible for graphene inverters to mimic the characteristics of silicon inverters.

Electrostatic doping is induced through the electric field between metal gates, which are located 40 nanometers away from graphene channels. The doping can be altered by varying the voltage, enabling researchers to test specific doping levels.

"This will allow us to find the sweet spot for operating the device," Chen said.

Further work will be needed to integrate the prototype into a working graphene circuit for digital applications.