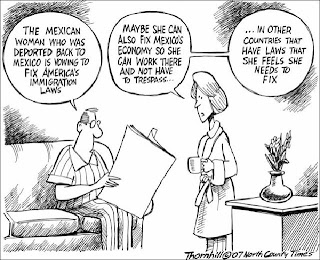 I have generally stayed away from the broad immigration debate that has ragged for decades because it has been traditionally wrong headed.  Now we are finally seeing the broad picture change with the present recession.

There is one basic fact always ignored by pundits.  Nations export immigrants because their local economies are mismanaged due to government failure or war.  Who today worries about excessive German or Italian immigration?

These numbers indicate that even is beginning to get its act together.

In fact, both and are close to leaving the mass immigration market.  The only significant exporter is the Islamic world and the advent of the Arab spring strongly indicates that reforms are on the way there also.

History has shown that immigrants are available only for a brief period of time from any given source in our developing world.  Recall that a necessary prerequisite for immigration is an already acquired education. That becomes possible when the sending country invests in education.  That is why we qar4e starting to see Africans now.  Yet a generation later the tap turns off because local growth retains the young.

The other huge unrecognized factor is that the developed world has opted for much older maternity.  We have transitioned from an average age of say twenty one to a new average of thirty one.  There may be some loss because of this but I am hesitant to proclaim a real fertility problem at this time when minor policy changes can quickly support a restoration of fertility.

I also expect a radical advance inside the next decade or so in the whole process of birthing in which the embryo will be carried only for three months and then incubated instead.  At the same time aging reduction will allow women to have children for at least an additional decade or even two decades.

In short, the apparent loss of fertility may be a postponement rationally considered and ultimately beneficial.  It is way too soon to jump to conclusions and the only certainty is that the whole picture will look different again in a decade or so.

Forbes - In 2008, the United States had over 1 million naturalizations; last year there were barely 600,000, a remarkable 40% drop. The rise of the economies of the rest of the world means those countries means their young generation do not go to the and other places for a better life. It can also mean they attract those who left before for a brain drain from countries like the .
The number of Mexicans annually leaving Mexico for the U.S. declined from more than 1 million in 2006 to 404,000 in 2010 — a 60% reduction. Since 2008 naturalizations have dropped by 65% from North America, 24% from Asia and 28% for . In fact the only place from which naturalizations are on the rise appears to be , with an 18% increase.

The could join as a rapidly aging society with low birthrates and little immigration to offset the demographics.

By 2030 will have about 53 retirees for every 100 people in its workforce; by comparison the ratio will be closer to 30. As a result, will face a giant debt crisis, as social costs for the aging eat away its currently frugal and productive economy. According to the American Enterprise Institute’s Nick Eberstadt, by 2020 debt service compared to GDP will rise to twice that currently suffered by .

Europe, of course, is not alone in the hyper-aging phenomena. Japan, South Korea, Taiwan and Singapore face a similar scenario of rapid aging, a declining workforce and gradual depopulation.

I cover demographic, social and economic trends around the world. I am a distinguished presidential fellow at in and an adjunct Fellow at the Legatum Institute in . I have published seven books, including The Next Hundred Million: in 2050 (Penguin 2010) and The City: A Global History (Modern Library: 2005). I am also the executive editor of www.newgeography.com.

To President Barack Obama and many other Democrats, continues to exercise something of a fatal attraction.  The “European dream” embraced by these politicians — as well as by manypundits, academics and policy analysts— usually consists of an America governed by an expanded bureaucracy, connected by high-speed trains and following a tough green energy policy.

One hopes that the current crisis gripping the E.U. will give even the most devoted Europhiles pause about the wisdom of such mimicry. Yet the deadliest European disease the must avoid is that of persistent demographic decline.

The gravity of Europe’s demographic situation became clear at a conference I attended in last year. Dieter Salomon, the green mayor of the environmentally correct , was speaking about the future of cities. When asked what ’s future would be like in 30 years, he answered, with a little smile,  ”There won’t be a future.”

Herr Mayor was not exaggerating. For decades, has experienced some of the world’s slowest population growth rates. Fertility rates have dropped well below replacement rates, and are roughly 50% lower than those in the Over time these demographic trends will have catastrophic economic consequences. By 2050, , now home to 730 million people, will shrink by 75 million to 100 million and its workforce will be 25% smaller than in 2000.

The fiscal costs of this process are already evident. Countries like , and , which rank among the most rapidly aging populations in the world, are teetering on the verge of bankruptcy. One reason has to do with the lack enough productive workers to pay for generous pensions and other welfare-state provisions.

, the über-economy of the continent, has little hope of avoiding the demographic winter either.  By 2030 will have about 53 retirees for every 100 people in its workforce; by comparison the ratio will be closer to 30. As a result, will face a giant debt crisis, as social costs for the aging eat away its currently frugal and productive economy. According to the American Enterprise Institute’s Nick Eberstadt, by 2020 debt service compared to GDP will rise to twicethat currently suffered by .

Europe, of course, is not alone in the hyper-aging phenomena. Japan, South Korea, Taiwan and Singapore face a similar scenario of rapid aging, a declining workforce and gradual depopulation.

In the past, it seemed likely would be spared the worst of this mass aging. But there are worrisome signs that our demographic exceptionalism could be threatened. One cause for concern is rapid   decline in immigration, both legal and illegal.  Although few nativist firebrands have noticed, the number of unauthorized immigrants living in the has decreased by 1 million from 2007.   Legal immigration is also down.  Meanwhile, the number of Mexicans annually leaving Mexico for the U.S. declined from more than 1 million in 2006 to 404,000 in 2010 — a 60% reduction.

More troubling still, fewer immigrants are becoming naturalized residents.   In 2008, there were over 1 million naturalizations; last year there were barely 600,000, a remarkable 40% drop.

The drop-off includes most key sending countries, including , which accounts for 30% of all immigrants. Since 2008 naturalizations have dropped by 65% from North America, 24% from Asia and 28% for .  In fact the only place from which naturalizations are on the rise appears to be , with an 18% increase.

This drop off, if continued, will have severe consequences. Since 1990 immigrants have accounted for some 45% of all our labor force growth and have increased their share from 9.3% to 15.7% of all workers. These immigrants, and their children, have been one key reason why the has avoided the deadly demography of and much of east Asia.

This decline can be traced, in part, by rapid decreases in birthrates among such traditional sources of immigrants such as , , and the rest of . Mexico’s birthrate, for example, has declined from 6.8 children per woman in 1970 to roughly 2 children per woman in 2011. This drop-off has reduced the number of Mexicans entering the workforce from 1 million annually in the 1990s to about 800,000 today. By 2030, that number will drop to 300,000.

A second major cause lies with the improved economy in many developing countries like . According to economist Robert Newell, per-capita  ’s GDP and family income have both climbed by more than 45% over the last 10 years  . Not only are there less children to emigrate, but there’s more opportunity for those who chose to remain.

Asia not only has lower birthrates, and, for the most part, better performing economies. As a result, immigrants — many of them well educated and entrepreneurially oriented — who in earlier years might have felt the need to come to the U.S. now can find ample opportunities at home. Many educated immigrants and graduate  students, notably from Asia, are not staying after graduation. ’s loss is ’s gain.

Finally the weak economy is also depressing birthrates to levels well below those of the last decade — birthrates that could soon reach its lowest levels in a century. Generally, people have children when they feel more confident about the future. Confidence in the American future is about as low now as any time since the 1930s.

Other factors could further depress birthrate. High housing costs and a lack of opportunities to purchase dwellings appropriate for raising children have contributed to thegrowth of childless households in countries as diverse as and . Until now, American home prices — including those for single-family units — were relatively affordable outside of a few large metropolitan areas.

But now many local and state governments — often with strong support from the Obama Administration — are implementing European-style “smart growth” ideas that would severely restrict the number of single-family houses and drive people into small apartments. For decades, areas with affordable low-density development (such as , , , and ) haveattracted the most families. If we become a nation of apartment-dwelling renters, birthrates are likely to slide even further.
What does this suggest for the American future? History has much to tell us about the relationship between demographics and national destiny. The declines of states — from Ancient to Renaissance and early modern — coincided with drops in birthrates and population.

To many in our entrance to the ranks of hyper-aging countries would be a welcome development. It would also cheer many academics and greens, and likely some members of the Obama Administration, who might see fewer children as an ideal way to reduce our carbon footprint. Perhaps happiest of all: the authoritarian Mandarins in Beijing who can send their most talented sons and daughters to American graduate schools, increasingly confident they will return home to rule the world.