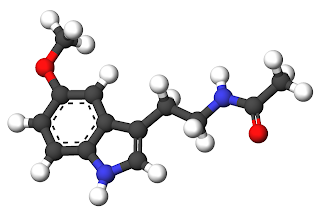 For my other cancer tale today we have this item that argues in favor of melatonin.  While it is not an outright cure, it is clearly able to slow the progress of the disease.  That it is not universally prescribed on diagnosis along with other similar agents as applicable is bad medicine.  The rush to attack the disease has always placed actual supporting therapies in the back seat.

Yet simply stalling the disease, strengthening the immune system and ensuring a full spectrum of nutrient support seems to be the absolute first step everyone should engage in.

In fact, much of the anecdotal stories received over the years about health restoration of cancer victims can be associated with following the steps described in the last paragraph.

Another comment I would like to make.  It is that all recommendations of dosage levels that find its way into print err grossly on the low side.  In short, they cannot always be trusted to be sufficient for your personal needs.  Instead, read what you can about the toxology of the substance and then slowly step up the dosage to a level that is clearly sufficient to even excessive.

I have done this with Vitamins C and D in order to reach convincing biological numbers.

Do not be scared to take the dosage up to a level in which side effects show up and then back off.  Melatonin will interfere with your sleep in high enough doses.

How and why melatonin is an effective cancer treatment

(NaturalNews) Numerous studies have established melatonin as one of the most effective anti-cancer treatments in existence. It inhibits cancer cell growth and proliferation; it destroys cancer cells, stops angiogenesis (new tumor blood vessel growth), and prevents harmful forms of estrogen from stimulating cancer cell growth. Despite its success in clinical trials and in doctors' experiences with their patients, it has not been widely prescribed in conventional medicine, though its effects have proven to be superior to those of many chemotherapeutic drugs.


In one clinical trial, patients with glioblastoma, a type of brain cancer, were given either radiation and melatonin, or radiation alone. Twenty-three percent of the patients who took the melatonin were alive after a year, while none who had received only radiation were still alive. Similarly, in another study by oncologists in , patients with non-small cell lung cancers who had failed chemotherapy were given melatonin. They were compared with other patients with non-small cell lung cancers who weren't given melatonin. A year later, 26 percent of the patients who had taken melatonin were still alive; whereas, none in the non-melatonin group remained alive.


Studies have also revealed melatonin to be more effective for treating pancreatic and lung cancers than a drug commonly used to treat these types of cancers. What's more, this drug may cost more than $4,000 per month, while twenty milligrams of melatonin cost approximately $11 per month.


Melatonin functions to destroy cancer in multiple ways. First, because it is toxic to cancer cells, it induces apoptosis, or cancer cell auto-destruction, as well as directly kills cancer cells. It also slows tumor growth through a variety of mechanisms, such as by inhibiting epidermal growth factor receptors on cancer cells. Epidermal growth factors play an important role in cancer cell growth and proliferation, so blocking their receptors on cancer cells prevents them from carrying out these roles.
Melatonin also stimulates the immune system and increases the cancer-killing activity of macrophages, monocytes, natural killer cells, T-helper cells and eosinophils, all of which are involved in cancer cell destruction.


Additionally, melatonin inhibits angiogenesis (new tumor blood vessel creation) from existing blood vessels. Tumors get their nutrition through blood vessels, and as they grow, they require an increasingly greater supply of blood vessels to feed themselves. Preventing new blood vessel growth limits their food intake and causes them to shrink or stop growing.


Melatonin has properties which enable it to block the effects of estrogen upon cancer cells; this is important because certain forms of estrogen stimulate the growth of hormonally-influenced cancers, such as breast, endometrial, ovarian and uterine cancers.

Finally, as an antioxidant, melatonin reduces inflammation, a condition that enables cancer's survival, and it scavenges free radicals so that they don't damage normal cells and make them vulnerable to further genetic mutations.


Despite these favorable statistics, melatonin is seldom recommended to patients in conventional medicine because the laws which govern the practice of medicine are drastically influenced by pharmaceutical interests, which prevent doctors from recommending it to their patients in lieu of expensive, damaging chemotherapy drugs. It is, however, an effective natural treatment that not only helps to prevent cancer, but which also plays an integral role in healing the body from it.


Learn more:http://www.naturalnews.com/033511_melatonin_cancer.html#ixzz1XFMNGmJZ
Posted by arclein at 12:01 AM