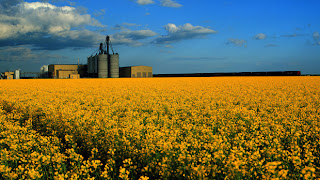 Canola was born to provide a commodity oil product to the international market.  To that end it was purified and all sources of flavor removed.  This made it perfect for industrial food production as one could simply add flavors back in as you needed them.

It is no trick to blend olive oil with canola to produce a pleasant enough product on its own.

Yet here we discover that chefs are discovering the original flavors provided by cold pressed canola oils and we learn that the result can directly challenge olive oil.  This is unexpected and we can see this discovery running through the food industry over the next decade or so.  What farmer does not want to label his oil crop to sell at non commodity pricing?

This is more good news for a product that keeps surprising.

Why Canadians should soak up a canola oil revolution

What if I were to tell you there is an ingredient that expresses the very soul of Canadian terroir? A nectar of the prairie, if you will. A golden northern essence that, like a good wine or a reeking French cheese, reflects both the soil that nourished it and the human hand that reared it.

Its name? Canola oil. Laugh all you want.

But before you scoff at that near-odourless liquid that comes in a two-litre plastic jug for $5.69, there are two things you should know about canola oil.

The first is that it is arguably the most successful Canadian invention of all time. (Insulin and “roll up the rim to win,” notwithstanding.) Fifty years ago, it did not exist. Back then, there was only a member of the brassica family (think mustard, cabbage, turnip, etc.) known as rapeseed, whose oil tasted bitter and contained a type of fat that is considered toxic. Then, in the 1970s, Canadian agricultural scientists bred and crossbred rape until it tasted sweet and the toxins were all but gone.

The second is that this revolutionary vegetable oil – high in omega-3s, low in saturated fat – is considered more heart-healthy than olive oil. The leftover seed meal even boosts milk production in dairy cows. In 1978, the Western Canadian Oilseed Crushers’ Association christened this new and improved plant, joining “” with the Latin word for oil. (Some maintain the name joined “” with “oil” and “low acid.” The controversy rages.)

When it comes to seed-based ingredients, canola may lack the trendiness of quinoa or grits. But consider that this year Canada will grow more than 13-million tonnes of the stuff – accounting for 20 per cent of the global production – and export almost $3-billion of oil (which buys you a lot of quinoa and grits).

Trendiness may be in canola’s future. Because it just so happens that not all canola oil is as flavourless as the stuff on supermarket shelves, which has been extruded, degummed, acidified, vacuumed, bleached and deodorized, all in the name of shelf life and what you might call the 21st-century agro-industrial palate.

This other, far rarer canola oil is made by artisan farmer types with small presses that gently squeeze out, drop by drop, an oil with a colour reminiscent of a late August sunset. It is known as cold-pressed or virgin canola oil. And as its name suggests, it possesses a flavour profile that bests many extra virgin olive oils. Its texture is silky and clean, the notes are toasty, nutty and grassy, and the finish is sweet and vegetal.

That distinctive flavour and ultra-golden hue are a result of the very substances industrial processors seek to remove: organic compounds. Many of them are considered healthy. Sterols reduce cholesterol, tocopherols can help prevent everything from macular degeneration to Parkinson’s disease, and squalene’s role in preventing cancer is being studied. (Industrial processors aren’t trying to ruin your salad – they remove these and other compounds because they shorten shelf life and make the oil unsuitable for frying.)

Despite canola’s Canadian roots, the cold-pressed variety gets more love in (where, unbelievably, it’s occasionally referred to as “virgin rape oil”). In and , numerous brand names can be found on supermarket shelves. In , the government bestows an annual award to virgin rapeseed oils “which are characterized by an intense seed-like aroma and taste, combined with a nutty aftertaste.”

isn’t anywhere close to that level of virgin canola appreciation. But it does have its admirers. Michael Allemeier, an instructor at the Southern Alberta Institute of Technology who was formerly the chef at Mission Hill Family Estate in Westbank, B.C., proclaimed cold-pressed canola to be “the olive oil of the North” in 2003. “I love using it for finishing soups and in salad dressings,” he says. “It really adds something. The flavour is rich, mouth-coating and nutty.”

Mr. Allemeier uses Highwood Crossing virgin canola oil, which is grown near Peace River and pressed south of by third-generation farmer Tony Marshall. The very same oil is featured at ’s River Café, where chef Andrew Winfield drizzles it on tomatoes, brushes it on flatbread and folds it into slow roasted potatoes.

Thousands of kilometres east, has a virgin canola oil of its own, grown and pressed in and sold under the brand name Pristine Gourmet.

Do the two oils taste different? Does virgin canola reflect differences in geography? Does it express “terroir”?

I poured samples of both oils onto two white saucers. The Pristine Gourmet oil was a deeper yellow – more pastured egg yolk than August sunset – and the flavour was more intensely nutty. The Highwood Crossing oil, on the other hand, was sweeter and had a silkier texture. Though the Highwood Crossing oil seemed milder, its finish was unexpectedly more pronounced when used in salad dressings. They were clearly the same kind of oil, and yet clearly different, too. In other words: terroir.

As with dark, bitter Tuscan olive oils, the flavour of virgin canola oil on its own provides only a vague hint of how it combines with other ingredients. It adds savoury depth to salad dressings, and dimension to otherwise flavour-challenged dishes. I’ve found that it somehow magnifies the umami in tomatoes – something Mr. Allemeier confirmed. (I poured it over a fusilli tossed with an Italian tomato sauce and my picky two-year-old ate a record-breaking three bowls.)

Chef Jonathan Gushue of Langdon Hall – whose cuisine is as ambitious as it is reflective of Canadian ingredients – loves the Pristine Gourmet oil. He uses it in everything from flank steak with a canola and pink-lady onion vinaigrette to a smoked canola Hollandaise sauce. “The best thing we did,” Mr. Gushue says, “was a canola crème pâtissière with sea buckthorn. It has such a distinctive mouth feel. It’s rich but not heavy and has a clean finish.”

Almost a year ago, Mr. Gushue banished olive oil from the Langdon Hall kitchen, replacing it primarily with virgin canola but also with virgin soybean oil and hemp oil. He hasn’t looked back. “Why would you use anything else when you have such an amazing product on your front doorstep?”