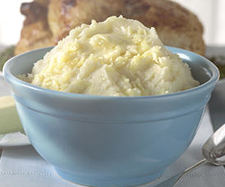 This is taken from a medical advice newsletter and it illuminates an important truth.  The potato and that also means all white starchy foods are direct sources of carbohydrates and thus difficult to manage on their own in one’s diet.

A lot has been said about fast food, but the reality the only fast food we should really worry about is the French fry.  The rest sort of works itself out.  A hamburger by itself is not a lousy meal but not one to repeat too often.

The bottom line is that refine starch is as bad as outright sugar.  Starch is immediately converted to glucose before it even gets out of the stomach. Thus its glycemic index is sky high.

I was listening to the Howard Stern Show in my car for a few minutes on the way to the clinic and Howard was telling his co-host Robin Quivers about how upset he was with himself.

Then he said something like, “I don’t get it. I eat right. I have a low-fat baked potato every day. And I still have this 10 pounds I can’t get rid of.”

I’ve read scores of books on nutrition, I’ve attended multiple conferences and I’m a certified clinical nutritionist. I’ve been thinking and living this and doing everything I can to eat healthier since I was a small child… and I’ve made the same mistake.

I don’t fault anyone for not getting it. It’s a fledgling science, and we thought we knew things that later turned out to be wrong.

Plus, I’ve done this for a living, and the disinformation campaign is still overwhelming to me. We see and hear so much through the mass media because they have an incentive to sell you things that are unnatural. Because that’s where the profit is.

Yet I still find myself wanting to agree with those jingles and commercials. I feel that emotion of “Oh, a low fat diet. That does seem so healthy...” And I have to correct myself.

Nutritionist thought they were doing the right thing by telling everyone to remove all fat from your diet. But it’s not fat that makes you fat. It’s excess carbohydrates.

As far as a potato goes, Howard might as well have said, “I’m eating a snickers bar every day, why aren’t I lean?”

In fact, he’d be slightly better off to eat a snickers bar than a potato.

Potatoes are an all-starch food. There’s almost zero fat or protein in a potato. It’s almost pure carbohydrate. And it’s a kind of starch that breaks down into sugar exceptionally fast. As soon as a potato hits your saliva it starts turning into blood sugar.

All that blood sugar means you have to produce more and more insulin to process it. Eventually, your body gets tired and stops responding.

It’s kind of like walking into a kitchen while someone is cooking. At first, you get a blast of aroma. But after a few minutes, you don’t notice it any more. Your hormones are the same. When your body stops responding to insulin, it’s called insulin resistance.

Blood sugar that your body can’t or won’t process gets stored as fat. So it’s foods with excess carbohydrates that can make you fat. Not fat itself.

So the idea is to eat foods that don’t spike your blood sugar. Also, you want to let your blood sugar come back down after eating so that your insulin doesn’t stay elevated for too long.

This means eating foods with a low Glycemic Load (GL). The GL is simply a number you get when you multiply a food’s Glycemic Index (GI) rating by the total amount of carbohydrate in each serving you eat.

That makes it much more practical for your everyday life because the GL tells you how fattening a food is.

For instance, let’s look at a Snickers Bar. It has a glycemic index rating of 68. That means it breaks down into blood sugar much slower than table sugar (which has a 100 rating).

A potato has a sky-high GI of 104. So it’s worse for your blood sugar than actual sugar. And much worse than a snickers bar.

But that’s not the whole story.

A Snickers Bar also has more of the right kind of fat and more protein than a potato. And because it has more stuff in each serving than just pure carbs, it has a lower Glycemic Load. That means it’s less fattening.

A medium potato has an enormous 216 grams of carbs per serving. This gives it an incredibly high GL of 36.

The GL is a fresh way to look at everyday foods. Some GL ratings may surprise you – especially if you’ve been eating cereal and potatoes.

I consider foods with a glycemic load under 10 as good choices. They are a green light. Foods that fall between 10 and 20 on the GL scale are more like a yellow light: not bad, but proceed with caution.

Foods above 20 are a red light. They will not only make you gain weight but keep you from dropping weight just like Howard Stern is experiencing. Eat those foods sparingly and try to eat protein instead. Protein has a GL of zero. For the complete glycemic load chart, click here.

If you want to eat a potato, stay away from white potatoes and opt for a sweet potato instead. It has a GL of only 12, and they’re loaded with carotenoids, vitamin C, potassium, micronutrients and fiber.

To Your Good Health,

What is the Glycemic Index?

The Glycemic Index (GI) is one the best tools for fat loss. It measures how quickly foods breakdown into sugar in your bloodstream. High glycemic foods turn into blood sugar very quickly. Starchy foods like potatoes are a good example. Potatoes have such a high GI rating; its almost the same as eating table sugar.

What is the Glycemic Load (GL)?

The GI tells you how fast foods spike your blood sugar. But the GI won’t tell you how much carbohydrate per serving you’re getting. That’s where the Glycemic Load is a great help. It measures the amount of carbohydrate in each service of food. Foods with a glycemic load under 10 are good choices—these foods should be your first choice for carbs. Foods that fall between 10 and 20 on the glycemic load scale have a moderate affect on your blood sugar. Foods with a glycemic load above 20 will cause blood sugar and insulin spikes. Try to eat those foods sparingly.

Avoid potatoes and other white foods, like white rice, sugar and salt.

Try making protein the focus of each meal. It kicks your metabolism into higher gear. All meats, fish and poultry are the real “guilt-free” foods. The protein will help you handle insulin better, build muscle and repair tissue-all essential for staying lean and preventing diabetes.

Snack on nuts and seeds.  They are a good source of protein and have Omega 3’s.

Choose vegetables that are low glycemic.

Choose fruits such as berries and fruits you can eat with the skin on.

Eat a high protein breakfast every morning. It will stabilize your blood sugar and get you off to a good start.
Posted by arclein at 12:01 AM