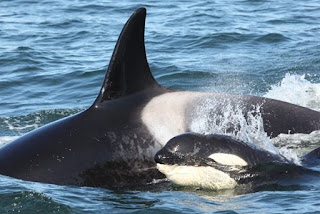 A little bit of natural science news here today that is worth noting.  The offshore population of killer whales just happens to prey on the shark population.  This is unexpected because the other better studied populations work on either salmon or marine mammals.  In fact it had been thought that large sharks lacked significant predators and this shows just the opposite.

It is not what anyone would have first guessed, but the present study underway has provided the evidence.  Thus our outer Orcas do target sharks and possibly that is the mainstay of their diet.

I am always surprised how small the predator population actually is, particularly when neither the Orca nor their prey are on any human dinner list.  Perhaps the prey population is naturally small for other reasons.

Orcas, not sharks, the dominant predator off coast

- It was the kind of feeding frenzy John Ford had never seen before.

Ford, a research scientist with the Department of Fisheries and Oceans, was aboard a boat north of Haida Gwaii but just south of Alaska, studying the feeding habits of a little-known group of offshore killer whales.

The mammals were hyperventilating, arching their backs and diving deep.
On the hydrophone, Ford could hear their excited songs.

Minutes passed and then a chunk of tissue -- about 250 grams in size and later proven to be part of a liver -- floated to the surface, coming to rest in a slick of oil.

More and more tissue and oil soon appeared, covering an area of ocean in a sheen hundreds of metres in size and flattening the water's ripples.

Ford and a colleague collected samples, which were later analyzed at DFO's Pacific Biological Station in Nanaimo, .

The sleeper shark is one of 14 shark species found in B.C. waters. Blackish brown or slate green in colour, the shark can grow to 4.3 metres in length.

"It was one of the top days in my 30-plus-year career studying wild killer whales," said Ford, of watching the feeding frenzy. "It was the culmination of many years of speculation, debate, you know, pondering about what it is that these animals feed on.

"It was really gratifying to see that this piece of the jig-saw puzzle finally fell into place."

The May 2008 incident was published in a recent issue of Aquatic Biology and included as an exhibit at the Cohen Commission, the inquiry examining the causes of the 2009 collapse of the sockeye run.

The incident and the subsequent paper have provided researchers with a few more details about offshore orcas, a population almost entirely unknown to scientists.

Three groups — residents, transients and offshore orcas — make up B.C.'s killer whale population, but the last of the three was first identified off the B.C. coast only in the late 1980s.

Ford said about 300 to 500 whales make up the population, which travels from to the in .

The orcas, he added, look different than their resident and transient cousins: their fins' shapes appear to be different and their body sizes, smaller.

He said the mammals travel in groups of as many as 100.

Congregating mainly on the edge of the continental shelf, the orcas rarely and unpredictably venture into the waters between and the mainland, so little is known about them and encounters are opportunistic, added Ford.

While resident killer whales feed on salmon and other fish and transient orcas focus almost exclusively on marine mammals, the diets of offshore killer whales have stumped researchers.

They began to hypothesize that the whales were targeting sharks after they observed worn-down teeth on some stranded offshore orcas, said Ford.

A photograph published in a newspaper in the early 1940s also showed worn-down teeth on the mammals.

Ford thinks orcas are targeting sharks because their livers are rich in fatty oils and energy.

"We believe that for killer whales generally that they are going after the most profitable prey, which tend to be the bigger kinds of body sizes and the highest oil content," he said.
One year after the May 2008 incident, a colleague of Ford's observed another, similar feeding frenzy in .

On that occasion, offshore killer whales fed on about seven sharks over some three hours.
Just in the past few weeks, a researcher contracted by DFO witnessed orcas eating sharks about 80 kilometres off the southwest coast of .

Brian Gisborne, a retired commercial fisherman who also runs a water-taxi business, said he watched between 17 and 19 orcas attack and eat what's believed to be blue sharks.

Blue sharks are about three metres in length and are a indigo blue on their backs.
Gisborne said at least one of the sharks was nearly two metres long.

"They'd (the orcas) go on over ... swimming around through lots of sharks, and then every so often I guess they'd finally get hungry.

"Somebody would grab one and the whole family would come together and they'd tear it all up and different ones would get pieces of it. As best as I could tell that what was going on."

Gisborne said he took samples so Ford should soon be able to tell what type of sharks became dinner.

With genetic work still to be done, there's little chance research work on the offshore orcas will come to an end any time soon.

Several remote, acoustic-monitoring sites are moored below the ocean's surface off B.C.'s coast, and Ford said researchers hope to get a better understanding of where the mammals congregate.

Once they know that, he added, researchers will have a better chance of finding them and learning about their diets.

"We feel like we've still got to learn much more about their diet throughout the year.

"It's going to take a long time. And we're just hoping that we'll have more opportunities as we get to better understand where these whales tend to be.

"These are long-lived animals, so is our study," said Ford.