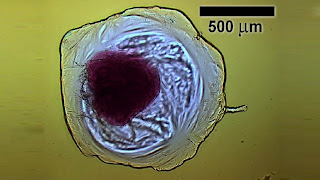 Well maybe.  I am rather skeptical because I have a great deal of respect for what Mother Nature is able to do.  It really is a negative argument, but if it were possible to produce a parallel inorganic biological evolution, then it already exists somewhere and somehow on earth in some environment able to sustain it.  We have seen no sign of it and earth has been engineered by life into its present regime.

Yet this good work that can lead to a more secure understanding of life’s possibilities.

I presently think that life arises early and is easily dispersed throughout space.  I also suspect that certain natural choices make our present forms almost inevitable.  The tough question is to discover just how much variability is real in our DNA and how much DNA is inevitable.

My main point now is that life is successful and aggressive at dispersal.  Never underestimate it.  I read too many texts fifty years ago explaining how all today’s knowhow in biology and natural history was implausible.  To do inorganic life processes is an interesting challenge.  If it can be done, then my argument is that it was done.  So why have we not found the evidence or have we?

The iCHELLs created by a team from the of could be the first step on the road towards creating 'inorganic life' (Image: )

All life on Earth is carbon-based, which has led to the widespread assumption that any other life that may exist in the universe would also be carbon-based. Excluding the possibility of elements other than carbon forming the basis of life is often referred to as carbon chauvinism and researchers at the are looking to overcome this bias and provide new insights into evolution by attempting to create "life" from carbon-free, inorganic chemicals. They've now taken the first tentative steps towards this goal with the creation of inorganic-chemical-cells, or iCHELLS.

Just like biological cells, the cells created by Professor Lee Cronin, Gardiner Chair of Chemistry in the and Engineering, allow several chemical processes to be isolated within them. They can be compartmentalized by creating internal membranes that control the passage of materials and energy through them. The researchers say the cells, which can also store electricity, could potentially be used in all sorts of applications, such as sensors or to confine chemical reactions.

However, the ultimate goal of the project is to demonstrate that inorganic chemical compounds are capable of self-replicating and evolving, just like organic, biological carbon-based cells.

"The grand aim is to construct complex chemical cells with life-like properties that could help us understand how life emerged and also to use this approach to define a new technology based upon evolution in the material world - a kind of inorganic living technology," said Prof Cronin. "If successful this would give us some incredible insights into evolution and show that it's not just a biological process. It would also mean that we would have proven that non carbon-based life could exist and totally redefine our ideas of design."

Prof Cronin gave a talk at TED Global earlier this year in Edinburgh where he said that if his team is successful in creating life while taking carbon out of the equation, it might reveal what other elements might be capable of producing life elsewhere in the universe and provide NASA with a better idea of what to look for in the search for extraterrestrial life.

The team's paper "Modular Redox-Active Inorganic Chemical Cells: iCHELLs' is published in the journal Angewandte Chemie.
Posted by arclein at 12:01 AM