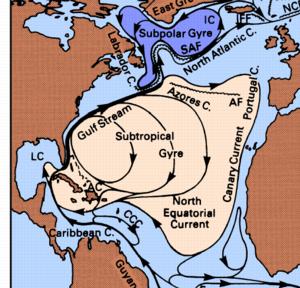 It appears that the modelers have discovered that one can stuff unwanted heat, or for that matter unwanted cold into this large sack below the ocean’s surface layer.  Now they have to discover where and when this all happened and if it really did.

We really need much more measurement.  The only creditable explanation that I have for the clear and persistent warming of Arctic surface waters is to presume an increase in the quantity of injected water from the Gulf Stream.  This could have been caused by the Stream actually slowing down and becoming larger in its effect.  A glance at the map above shows how small changes in the sub-polar gyre could easily alter the heat input into the Arctic itself

The complexities are such that a range of scenarios can be convincingly proposed.  I am also informed from the two degree up shift in surface waters during the Bronze Age most likely brought about by a forested .

The bigger picture makes the minor variations now debated rather suspect at best and it is no surprise that this work is been met by hoots from the media who are still smarting over the Global Warming 'crusade'.

Deep areas of Earth's oceans may absorb enough heat that warming of the surface pauses for as long as a decade, a new study has found.

The joint and Australian study shows that hiatus periods, when the warming of Earth's surface slows, may be a relatively common phenomenon linked to La Niña-like conditions.

While excess energy entering our climate system might not always warm the surface, the total amount of heat is still increasing, the researchers report in the latest issue of Nature Climate Change.

"In our model we found that most of the heat is going into the deep ocean at those times when the net temperature of the surface is flat," said study co-author Julie Arblaster, senior research scientist at the Bureau of Meteorology.

"These hiatus periods, or slow down periods, can happen from time to time even when there's additional energy coming into the system," says Arblaster.

The study illustrates one reason why global temperatures do not simply rise in a straight line, says lead author Gerald Meehl from the for Atmospheric Research.

"We will see global warming go through hiatus periods in the future, however, these periods would likely last only about a decade or so, and warming would then resume," said Meehl.

The latest hiatus was during the decade of 2000-2009, when the average surface temperature of the Earth showed little increase, and even a slight decrease.

At the same time, measurements of the energy entering and leaving the top of the atmosphere found a total of roughly one watt per metre square was retained in Earth's climate system.

To find out where the heat was going, the researchers ran simulations using climate system models able to portray complex interactions within the environment. After supercomputers ploughed through the calculations, they found eight hiatus periods across the coming century to further investigate.

These patterns are related to changes in ocean circulation, said Arblaster.

As circulation decreases in the , less cooler water, such as from melted sea ice enters the deep sea, explains Arblaster.

"But more study is needed to see what leads to such changes [in ocean circulation] occurring."

Ming Feng, an oceanographer from the CSIRO who was not involved in the study, said it is "interesting research."

"This is a modelling exercise that shows a plausible explanation for why there is a cooling effect when heat is still entering the system," Ming said.