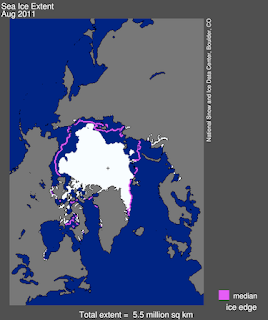 2007 achieved its record lows by the timely intervention of strong winds that concentrated the ice and sharply reduced cover.  Since then much more ice mass has been lost and this year we match the 2007 low without any special wind concentration. Wind conditions as in 2007 will likely even halve the present apparent coverage because it is mostly badly weakened ice.  Such winds could easily remove a large part of present coverage into the .

As I observed several years ago excess heat continues to infuse the at much the same rate each year.  The appearance of large open patches in the ice fields themselves suggests that the end game has begun and that the bulk of the annual winter sea ice will disappear every summer.

It should be pretty obvious now that the Arctic sea ice as we knew it is gone and has been replaced with recently formed ice at most a couple of seasons old.

Arctic sea ice extent for August 2011 was 5.52 million sq. km.. The magenta line shows the 1979 to 2000 average for that month. The black cross indicates the geographic North Pole. (IMAGE/ NSIDC)

Arctic sea ice extent will likely reach its lowest point for the year sometime during the next two weeks, and may yet set a new record low in 2011.

Whether a new record low is set hinges on three factors, says the National Snow and Ice Data Centre:

• how much heat remains in the ocean to eat away at the ice edge and bottom;

• whether wind patterns will blow the ice together and reduce ice cover or spread the ice apart and expand ice coverage; and,

• how thin the remaining ice cover is because thin ice quickly melts away when it is surrounded by warm water.

What’s already known is that last month Arctic sea ice extent — that is, how much of the is covered by ice — reached the second lowest level for the month from 1979 to 2011.

“If ice stopped declining in extent today, it would be the second-lowest minimum extent in the satellite record,” the NSIDC stated Sept. 6.

Both the Northwest Passage and the route appear to be open, the Colorado-based center said.

And sea ice in the also stands at record low levels.

Sea ice is now almost completely gone from the Northwest Passage channels, with the exception of a small strip of ice across a stretch of the , the NSIDC said.

According to the Canadian Ice Service, sea ice extent in the western has now reached the lowest at this time of year since record keeping began in 1966. Very little multi-year ice remains.

Throughout August, sea ice extent was near the record lows of 2007, underscoring the continued decline in Arctic ice, the NSIDC said.

Sea ice coverage remained below normal everywhere except the . In addition, several large areas of open water opened within the ice pack.

Although the decline of sea ice extent slowed somewhat during August, the ice retreated at a faster pace than average.

Air temperatures were one to four degrees Celsius higher than average from1981 to 2010 over the Arctic Ocean, with the strongest increase over the Northwest Passage region, the NSIDC said.
Posted by arclein at 12:01 AM