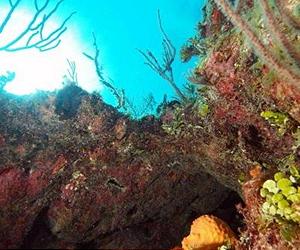 The take home here is that the last interglacial is accurately dated to 120,000 years before the present.  In a previous post discussing the Vostok ice core I associated the interglacial with a pass through the Sirius cluster. We have since gone back out on our orbit and are now on the way back.  We will revisit that cluster in the next 80,000 years or so pretty well pinning down the time frame for a complete orbit at around 200,000 years.

What is also interesting is that detailed geological interpretation and sampling can allow us to determine sea levels over long historical spans that may hold validity better and certainly independently over what we have done so far.

The extreme stability of the present regime is due to the elimination of the Northern ice sheet.  This can be expected to be sustained for a long time .

Because coral reefs grow near the sea surface, they are accurate markers of former sea levels. Two fossil reefs are evident at the sites, separated by an erosional surface that was cut by wave action. The first reef grew when sea levels were about 4 meters (13 feet) higher than today.

New evidence of sea-level oscillations during a warm period that started about 125,000 years ago raises the possibility of a similar scenario if the planet continues its more recent warming trend, says a research team led by theWoods Hole Oceanographic Institution (WHOI).

In a paper published online in the Sept. 11 Nature Geoscience, the researchers report data from an improved method of dating fossil coral reef skeletons in the .

By calculating more accurate ages for the coral samples than previously possible, they found that sea levels were considerably less stable than earlier believed--oscillating up and down by 4 to 6 meters (13-20 feet) over a few thousand years about 120,000 years ago during a period known as the Last Interglacial.

"This was the last time that climate was as warm as-or warmer than-today," said WHOI geochronologist William G. Thompson, lead author of the study. "If today's ice sheets continue to melt, we may be headed for a period of ice sheet and sea-level change that is more dynamic than current observations of ice sheets suggest."

The polar ice caps currently are shrinking and sea level is rising at a rate of about 30 centimeters (one foot) per century. "How much sea level will rise over the next century or two is a crucial question for the significant part of the world's population that lives in coastal zones," Thompson said.

A better understanding of sea-level change in the past can help to inform predictions for the future. Historical records such as those from tide gauges extend back only a century or so.

"The geological record offers a longer perspective on rates of change," Thompson said, "and sea-level changes during previous warm intervals are especially relevant to today's situation." Sea levels during the Last Interglacial are known to have been about 6 meters (20 feet) higher, on average, than they are today. "The real surprise is that sea levels were oscillating during this period."

To get more accurate age estimates from the geological record, Thompson developed an advanced way of interpreting the uranium and thorium isotope ratios that have been traditionally used as a coral dating method.

Until now, scientists attempting to date Last Interglacial coral reefs concluded erroneously that sea level was relatively stable during this period. "Our analysis of Last Interglacial fossil reef ages represents a breakthrough in our understanding of U-Th coral dating, leading to improved chronologies of past sea-level change," Thompson said.

Thompson teamed up with colleagues H. Allen Curran and Brian White of Smith College, and Mark A. Wilson of the College of Wooster, experts on the key fossil coral sites. "The geologic evidence for sea-level change at these sites is convincing," said Curran, "but we couldn't absolutely prove sea-level oscillation without more precise dating."

Because coral reefs grow near the sea surface, they are accurate markers of former sea levels. Two fossil reefs are evident at the sites, separated by an erosional surface that was cut by wave action. The first reef grew when sea levels were about 4 meters (13 feet) higher than today.

"The fall of sea-level is indicated by the wave-cut erosion of this first reef," said , "and the second sea-level rise was recorded by the growth of new corals on this eroded surface. The dating of fossil corals below and above this erosional surface, using our new methods, reveals important details about the timing of sea-level change that were previously obscured."

The finding of a significant sea-level oscillation 120,000 years ago is in sharp contrast to the last 5,000 years, where sea level has been relatively stable. "It appears that the smaller ice sheets of the Last Interglacial were significantly less stable than today's ice sheets," Thompson said.