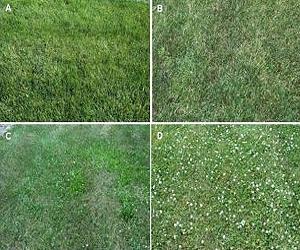 Now we learn that by working with natural fungal agents, it becomes possible to suppress insect damage to grasses.  This will certainly have a major effect on the sustainability of all turf everywhere.

A lot of human effort goes into lawn management.  Reining that in with a natural fungus protocol is always welcome.

We live in the golden age of gaining new knowledge in biological processes and many more such problems are out there to be resolved.

The right combination of compounds produced by a beneficial fungus could lead to grasses that require fewer pesticides and are safer for wildlife and grazing animals, according to scientists.

Neotyphodium is a fungus called an endophyte. It lives symbiotically, feeding off many species of grasses while providing the grass with protection from insects such as black cutworm. But Neotyphodium also can be toxic to animals based on the types of alkaloids it produces. It was once a serious concern for pasture managers.

Scientists have previously eliminated alkaloid profiles that caused toxicity in livestock, meaning pasture managers could feed their livestock without making them sick. But in making the grasses safe for animals, their susceptibility to insects came into question.

"These endophytes have changed everything for farmers who let their animals graze," said Douglas Richmond, a Purdue assistant professor of turfgrass entomology and applied ecology. "But they created another potential problem."

worked with researchers in to assemble a series of Neotyphodium endophytes that are safe for livestock consumption and tested them to see which would also act as natural insecticides.

They found a relatively few strains of the fungus that meet both criteria by producing two key alkaloid toxins - N-acetyl norloline and peramine which are a product of the fungal metabolism.

The scientists determined they were effective by characterizing insect growth and survival on grasses with different alkaloid profiles.

said that grasses naturally infected with the desired endophyte strains can now be propagated for commercial production.

"Both are relatively safe for mammals and other grazing wildlife," said. "Now the seed industry can put these endophytes into turf and pasture grasses and not worry about potential non-target effects."

Those endophytes also mean that farmers, golf course turf managers and even homeowners caring for their lawns could use fewer insecticides to manage their grasses.

"I think this is going to be very important for sustainability. It's going to decrease the footprint of cultured turf and pasture grasses," said , whose results were published in the Journal of Environmental Entomology. "And if you like having wildlife around having deer come up to your lawn if you live near the woods this is a benefit because it's safe for those animals."

Richmond said he is working with a New Zealand company, AgResearch USA Ltd., that develops turfgrass varieties to include these novel endophytes for sale in the turfgrass market.

We all know that Synthetic grass has be en widely marketed in many different ways to manifest and exhibit its benefits in the modern day. Artificial grass, although a synthetic and man-made, has elements of science that come into play, which heavily contribute to its unique characteristics.