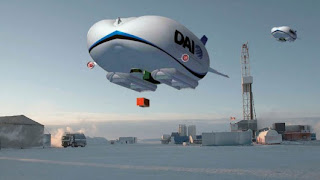 I have lost count of the number of serious initiatives underway in airship engineering.  This design however appears to be much more practical than any so far.  The double chamber configuration allows effective load spreading and space frame engineering to maximize the craft’s size.  Even more impressive, simple lengthening can hugely upsize capacity.  I see this design easily getting up to the 200 ton capacity level and possibly to 500 tons if that proves desirable.

Way more important, from my postings four years ago that focused on the need to adapt to a long haul point to point market configuration, I am seeing the industry converge on that market.  This design screams point to point container transport.

The premium market will obviously be the diamond mines in the arctic who need to avoid their winter highways.  The real market will be the weekly run from to and back with a load of produce.

The capital cost will drop rapidly and we will see a ship with four truck loads or containers doing the trip without stopping at a speed at least equal to the present road haulage speed.  Without vibration, cargo damage will be slight.

This design could clearly do that run and the bulk of cross country haulage will inevitably become point to point between the supplier and the local receiver. 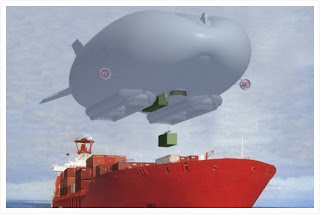 The famous and well documented Hindenburg disaster of 1937, when the hydrogen-filled airship burst into flames whilst attempting to tether to its moorings in , killed off the 'lighter-than-air' aircraft industry, as well as 35 unfortunate souls. Since the 1970's however, a determined band of, mostly British, aviation engineers has been battling to design and build a commercially viable 'air vehicle'. Many false starts, experimental craft and research projects followed (funded mostly by the military) but viability remained elusive, until now.

Hybrid Air Vehicles, a British Company founded in 2007 by the late Roger Munk and a direct descendant of those previously unsuccessful efforts, has recently achieved two massive commercial wins that seem to indicate that the airship has a very rosy future indeed. The clue is in the company name, however. These are not the cigar-shaped gas-filled 'balloons' of yesteryear but hi-tech semi-rigid lifting bodies that rely on vectored thrust from onboard engines and the aero-lift from the body shape for up to 40 percent of their lifting capacity with helium providing the rest. In addition, the use of pontoons on the underside of the hull that feature hovercraft-like skirts and driven fans means that that the aircraft can land on earth, concrete or water without ground crew.

This versatility plus an ability to stay airborne for 21 days and a potential lifting capacity of up to 200 tonnes finally enabled HAV to win a US$517million contract (€370million) in conjunction with Northrop Grumman to supply a Long-Endurance Multi-Intelligence Vehicle (LEMV) to the U.S. Army for deployment in Afghanistan starting in 2012. Whilst the LEMV is a relatively small vehicle designed for surveillance, HAV has now announced a civil customer for their heavy-lift variant.

Discovery Air Innovations of Canada has agreed to purchase a number of vehicles capable of lifting 50 tonnes and making way at 100 knots (185 km/h/115 mph) with the intention of providing cargo services to remote regions of the 'frozen North' at greatly reduced cost. Construction of the first vehicles will start in 2012 with commercial service beginning in in 2014. DAI may buy up to 50 of the vehicles over time depending on how operations progress.

Hybrid Air Vehicles see a large number potential uses for their craft in mapping and geographic monitoring, in humanitarian aid provision, offshore drilling support and, of course, luxury tourism. With these two major contracts in their pocket it looks as if the era of the airship has finally come, again.