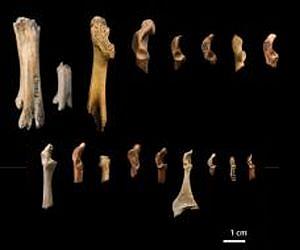 The real question of course was why not?  This puts it to rest.  The mass extinction wiped out almost everything large and vulnerable and spared partially the Sahul Continent ( – ).   Millions of years of evolutionary development has then taken the handful of surviving sub species and repopulated the globe.

One thing that has not been well understood is that this extinction preferentially depopulated the large long lived predators.  When this happens the local biome is seriously diminished as was observed in .  This creates a cascade of sympathetic extinctions within the biome and that makes the recovery for large predators pretty problematic.

This provides ample time for smaller species to evolve into available niches.  It als explains why there is evidence of former specialists hanging on in refugia while evolving slowly if at all.

These are subtle distinctions that I think need modeling and testing in order to properly examine the present catalog of life forms.

The bones are from the 17 species of Cretaceous birds which went extinct around the time of the dinosaurs. The two on the far left are foot bones and the rest are shoulder
bones. Credit: .

A new study puts an end to the longstanding debate about how archaic birds went extinct, suggesting they were virtually wiped out by the same meteorite impact that put an end to dinosaurs 65 million years ago.

For decades, scientists have debated whether birds from the Cretaceous period - which are very different from today's modern bird species -died out slowly or were killed suddenly by the Chicxulub meteorite. The uncertainty was due in part to the fact that very few fossil birds from the end of this era have been discovered.

Now a team of paleontologists led by Yale researcher Nicholas Longrich has provided clear evidence that many primitive bird species survived right up until the time of the meteorite impact. They identified and dated a large collection of bird fossils representing a range of different species, many of which were alive within 300,000 years of the impact.
"This proves that these species went extinct very abruptly, in terms of geological time scales," said Longrich. The study appears the week of Sept. 19 in the journal Proceedings of the of Sciences.

The team examined a large collection of about two dozen bird fossils discovered in North America - representing a wide range of the species that existed during the Cretaceous - from the collections of Yale's Peabody Museum of Natural History, the American Museum of Natural History, the University of California Museum of Paleontology, and the Royal Saskatchewan Museum. Fossil birds from the Cretaceous are extremely rare, Longrich said, because bird bones are so light and fragile that they are easily damaged or swept away in streams.

"The birds that had been discovered hadn't really been studied in a rigorous way," Longrich said. "We took a much more detailed look at the relationships between these bones and these birds than anyone had done before."

Longrich believes a small fraction of the Cretaceous bird species survived the impact, giving rise to today's birds. The birds he examined showed much more diversity than had yet been seen in birds from the late Cretaceous, ranging in size from that of a starling up to a small goose. Some had long beaks full of teeth.

Yet modern birds are very different from those that existed during the late Cretaceous, Longrich said. For instance, today's birds have developed a much wider range of specialized features and behaviors, from penguins to hummingbirds to flamingoes, while the primitive birds would have occupied a narrower range of ecological niches.

"The basic bird design was in place, but all of the specialized features developed after the mass extinction, when birds sort of re-evolved with all the diversity they display today," Longrich said. "It's similar to what happened with mammals after the age of the dinosaurs."

Longrich adds that this study is not the first to suggest that archaic birds went extinct abruptly. "There's been growing evidence that these birds were wiped out at the same time as the dinosaurs," Longrich said. "But this new evidence effectively closes the book on the debate."

Other authors of the paper include Tim Tokaryk ( ) and Daniel Field ().