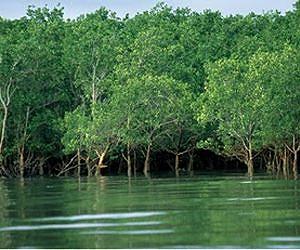 Again we get further confirmation of the importance of effective forest management anywhere let alone something as obvious as mangrove swamps.  We are finding that as general knowledge continues to advance that it simply gets easier to do the right thing or as much as possible.

I personally suspect that we have barely begun to understand what can be done to optimize the productivity of a coastal mangrove forest.  The more we learn and the more that we can achieve then the sooner it will become an integral part of our husbandry of Terra.

Recall just how barren the boreal forest looked until I invented in a thought experiment the cattail moose husbandry protocol.  Throw in the obvious options and we have discovered a new prairie able to support billions of humanity in gainful effort.

The fact is that the mangrove forest secures the coastal zone and its biome.  It surely produces an annual sustainable wood supply that needs to be harvested.  That alone should pay for management and access.  The wild life is a different matter as we are not too excited about eating them.  Yet the top end carnivores like the crocs need to be harvested in order to allow other parts of the biome to thrive.  Again fish need to be optimized.

Once mastered, I want to see the mangrove forests expanded to their maximum range.  Importantly the trees on a desert coast will fill the coastal atmosphere with moisture causing inland precipitation and short cutting the process of greening the deserts.

Mangroves are a highly important nursery ecosystem for fish and shrimp, and it is used by birds and other wildlife that attract tourists as well.

When the government of established in 2005, it enhanced protection of the coastal mangrove ecosystem from further degradation. A study by a team of researchers found that the new park caused a short-term negative effect on the livelihood of those who harvest mangrove trees for fuelwood but a long-term benefit to their local communities from increased fishing opportunities.

The study was published in the Proceedings of the of Sciences.

"A basic issue, however, is whether the protection afforded by national parks cause the local people's livelihoods to decline so much that they find themselves unable to climb out of poverty. It's a question that people are confronting all over the developing world."

In the area where the park was established, McNally analyzed satellite imagery to document that mangrove cover declined by 27 percent from 1990 to 2005 as a result of the trees being harvested for fuelwood and charcoal production. From 2005 to 2009, when the park was established and harvesting was restricted, mangrove cover declined by just one percent.

Mangroves are a highly important nursery ecosystem for fish and shrimp, and it is used by birds and other wildlife that attract tourists as well.

"If the park hadn't been established and harvesting of the mangroves continued, then eventually the shrimp and fishery harvest would decline because of the rapid degradation of the habitat," Gold said. "It's likely that the livelihood of the fishermen would also decline."

Using advanced econometric techniques, Uchida combined data obtained from a survey of 150 residents living near the park with changes in mangrove cover near their communities. The analyses demonstrated that the number of people who reported shrimping as a livelihood increased from 16 percent to 23 percent after the park opened, and fishing increased from 27 percent to 43 percent. Many of the households entering these fields had previously harvested the mangroves for fuelwood and charcoal.

"Globally, environmental degradation tends to happen in places where there is extreme poverty. In such cases, we cannot solve environmental problems without addressing poverty at the same time," Uchida said.

"What this study found is promising: the protected area in has been able to slow down the degradation of mangroves and at the same time provide new income opportunities for the poor."

According to the researchers, although some individuals fared poorly as a result of the more restrictive land use in the new park, protection of the mangroves improved the livelihoods of many community members.

McNally noted that local residents receive additional benefits of improved roads and better availability of water and educational opportunities because of the infrastructure that came with the establishment of the park.

"One concern, however, is that the big shift of people into the fisheries sector could harm the fishery unless proper fishery management practices are implemented," said McNally.